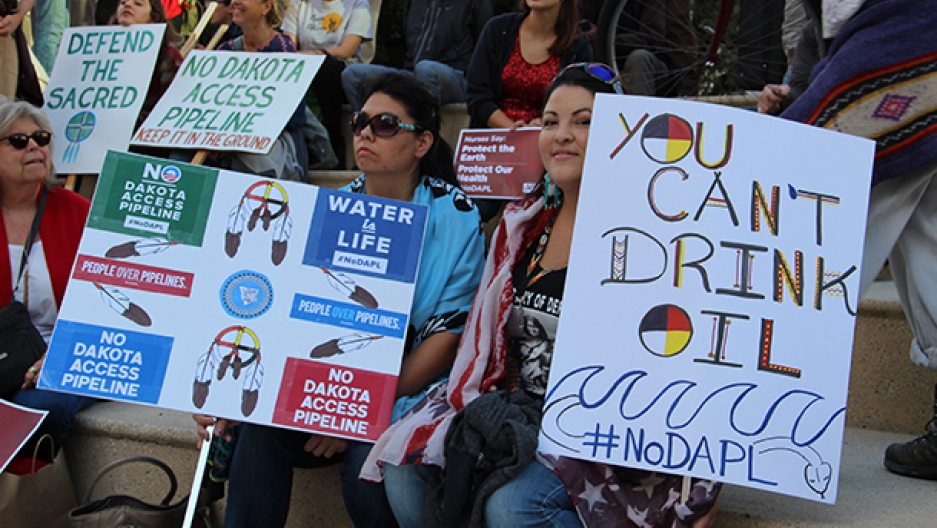 Local demonstrations against the Dakota Access Pipeline sparked protests in Oakland, California, and dozens of other places around the US.

North American oil and gas producers are rushing to build new pipelines as part of a bid to gain more power in the international oil and gas markets, but they are running into fierce opposition at home.

Activists may have lost the battle to block the Dakota Access Pipeline (DAPL) — on May 14, thousands of barrels of fracked crude oil began flowing to a terminal in Illinois and then down toward the US Gulf Coast — but Native and climate change activists say the struggle against DAPL was just one battle in a much longer war.

At least a dozen more conflicts are erupting across America as companies race to lay pipelines. Campaigners warn the US is becoming a “petrostate.” They say US climate commitments, and the very health of the planet, are at stake.

Industry’s determination to build is equally intense. During the DAPL protests in North Dakota, private security companies used surprisingly harsh tactics: dog attacks, hoses that doused protesters in subfreezing temperatures, metal detention cages modeled on dog kennels, plus numbers scrawled on the forearms of the people they arrested. These struck many as tactics from another era or another country. Why was North Dakota so intent on not losing the fight over the pipeline?

It turns out, officials were protecting a grand plan worth tens of billions of dollars. In that plan, DAPL is North Dakota’s linchpin. It allows a glut of fracked oil from the massive Bakken formation to flow southeast toward the US Gulf Coast. Bakken oil is part of what boosters call the “North American petroleum renaissance.”

The US is now the world’s third-largest producer of crude oil, pumping more than Iran and Iraq combined. North Dakota Republican Congressman Kevin Cramer says that means opportunity. Cramer is a champion of the DAPL and a climate change skeptic.

“We have the potential to produce all we need and then some,” Cramer says. “I view us as a North American energy bloc that rivals, if not exceeds, the global market potential of OPEC.”

But if that’s to happen, Cramer says, North Dakota producers can’t keep shipping fracked oil by expensive rail to the East Coast. They need more efficient means. “That's where the Dakota Access Pipeline comes in,” Cramer says. “That infrastructure has to, of course, involve moving oil to the coasts and having export terminals and all of that. I think Bakken crude is destined for the world.”

Cramer’s words struck some as an admission of dishonesty. DAPL, Keystone XL and other controversial pipeline projects have been justified, in part, as a drive for American “energy independence.” As it turns out, the pipeline company Energy Transfer Partners, backed by North Dakota officials, police and the National Guard, fought that huge battle at Standing Rock in large part so that US crude oil could leave the country.

“The oil and gas industry is sort of wrapping itself in the flag and talking about energy independence, when actually what they're doing is turning the country into a resource colony for export of oil and gas,” says Lorne Stockman of the watchdog group Oil Change International.

For 40 years, exporting US oil was illegal. During the Arab oil embargo, Congress imposed a ban on crude oil exports. Only American oil destined for Canada could leave US shores. But with all that fracking in North Dakota and Texas, the shale oil revolution changed the game completely.

Senators like North Dakota’s Heidi Heitkamp, a Democrat, started showing up on business talk shows, along with oil executives, saying it was time to turn American oil loose. “North America is going to become the energy powerhouse for the world ... and if you don’t allow the exports of this oil, they’re going to reinvest someplace else where they can market their oil,” Heitkamp told CNBC.

In December 2015, congressional leaders agreed to lift the nation’s four-decade ban on oil exports. Now, nearly 300,000 barrels of American oil go to China every day. In February, China became the biggest buyer of US crude. This year, for the first time, US exports topped a million barrels a day, double that of a year ago.

Ironically, all this is happening as demand for oil in the US and other Western countries is flattening. The massive build-out of tens of billions of dollars in pipelines, oil storage tanks and export terminals is a result of skyrocketing demand in the developing world.

“I think that they’re playing the long game, in that they are teeing things up to ensure that not just the United States, but the globe, stays reliant on oil for as long as possible," says Lena Moffitt, director of the Sierra Club’s Beyond Dirty Fuels campaign.

Oil companies have seen the writing on the wall, Moffitt says, so they’re moving as quickly as they can “to lock in continued demand for product via this infrastructure. The industry is in a race to secure the export terminals and the pipelines that will get these fossil fuels to our coasts as fast as possible.”

Oregon Democratic Sen. Jeff Merkley is among several lawmakers that activists look to for help. He is one of the main backers of the "keep it in the ground" campaign. His assessment of the current state of the US oil industry is blunt.

“The fossil fuel industry largely owns Congress,” he says. “They've invested bazillions of dollars in campaigns to control the Senate and the House. Our response to that has to be to bypass the federal government, go directly to every local organization and say, ‘Let’s own this problem at the grassroots level, and let's act.’ That is a grassroots strategy because we cannot wait for the US government."

The stakes are high, Merkley believes. “By 2050, we must completely replace our fossil fuel energy economy with clean and renewable energy,” he insists.

This story is part of an investigation by Reveal from The Center for Investigative Reporting, a nonprofit news organization based in the San Francisco Bay Area. This article is based on a segment that aired on PRI’s Living on Earth with Steve Curwood.