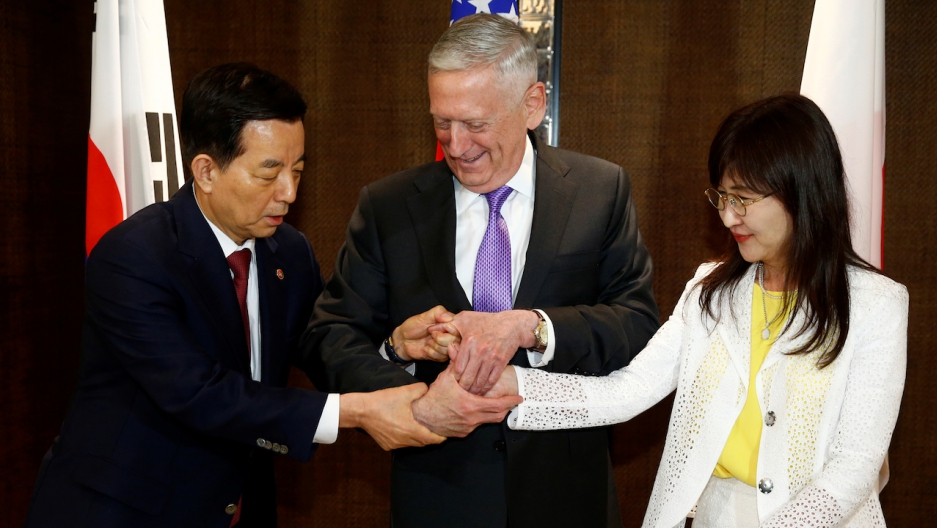 South Korea's Defense Minister Han Min-koo shows US Secretary of Defense James Mattis and Japan's Defense Minister Tomomi Inada how to do a handshake during a trilateral meeting on the sidelines of the 16th IISS Shangri-La Dialogue in Singapore, June 3, 2017.

Pentagon chief Jim Mattis moved to reassure Asian allies Saturday that the United States can work with China on reining in North Korea's nuclear weapons program without compromising its opposition to Beijing's continued "militarization" of the South China Sea.

Longstanding partners are also mortified that Trump has seemed indifferent to traditional alliances, and have interpreted his pulling out of a trans-Pacific trade deal and the Paris climate accords as signs of broader American disengagement.

Mattis, arguably Trump's most important statesman as the new president hopes to slash the State Department, tried to allay the fears.

"In the security arena, we have a deep and abiding commitment to reinforcing the rules-based international order, a product of so many nations' efforts to create stability," Mattis said in Singapore at the Shangri-La Dialogue, a major defense summit for countries from the Asia-Pacific region and beyond.

Calling North Korea's nuclear ambitions a "threat to us all," Mattis asked the international community to come together on the issue.

It is "imperative that we do our part each of us to fulfill our obligations and work together to support our shared goal of denuclearisation on the Korean Peninsula," Mattis said.

"The Trump administration is encouraged by China's renewed commitment to work with the international community toward denuclearisation," he added.

Pyongyang on Monday test-fired another rocket, the latest in a series of launches and atomic tests that have ratcheted up tensions over its quest to develop weapons capable of hitting the United States — something Trump has said "won't happen."

The defense chief spoke directly to concerns America might grant concessions to China to ensure cooperation on North Korea, saying the issue was not "binary" and that the United States would continue to pressure Beijing elsewhere.

"Artificial island construction and indisputable militarization of facilities on features in international waters undermine regional stability," Mattis said, calling China out over its "disregard for international law" and "contempt for other nations' interests."

The US Navy on May 25 conducted a "freedom of navigation" operation in the South China Sea, when the USS Dewey guided-missile destroyer sailed within 12 nautical miles of Mischief Reef in the Spratly Islands.

China claims nearly all of the South China Sea, despite partial counter-claims from Taiwan and several southeast Asian nations including the Philippines, Brunei, Malaysia and Vietnam.

It has rapidly built reefs into artificial islands capable of hosting military planes and other equipment.

One questioner asked if the US president was an "unbeliever" in the rules-based regional order. Another wondered if he could be trusted given his "America First" pronouncements.

"Bear with us," Mattis said. "We will still be there, and we will be there with you."

Mattis was repeatedly asked about Trump's decision to pull out of the Paris climate pact. He did not address the issue directly but the Pentagon generally views climate change as a security threat, especially given its role in famines and mass relocations.

"I think actions speak as loud if not occasionally louder than words," Payne said, pointing out that Mattis's first international visit was to Japan and South Korea.

"There's a consensus that the US message is very clear, not only from the point of view of the messaging, but the messenger," he said.

Lieutenant General He Lei, the head of China's delegation to the summit, said the "Asia-Pacific situation is generally safe and positive" but warned of "hotspot issues" flaring up from time to time.

"The nuclear issue on the Korean Peninsula keeps fermenting and remains complicated and unresolved," he said.

"Individual countries maintain their security through exclusive military alliances, base their security on other countries' insecurity and do not hesitate to stir up conflict and provoke trouble."

After meeting with President Xi Jinping in April, Trump, who once accused China of "raping" the US, praised its leader as a "good man," saying it would be inappropriate to pressure Beijing while Washington is seeking its help with Pyongyang.

International pressure ramped up on Pyongyang Friday as the UN Security Council imposed sanctions on 18 North Korean officials and entities.