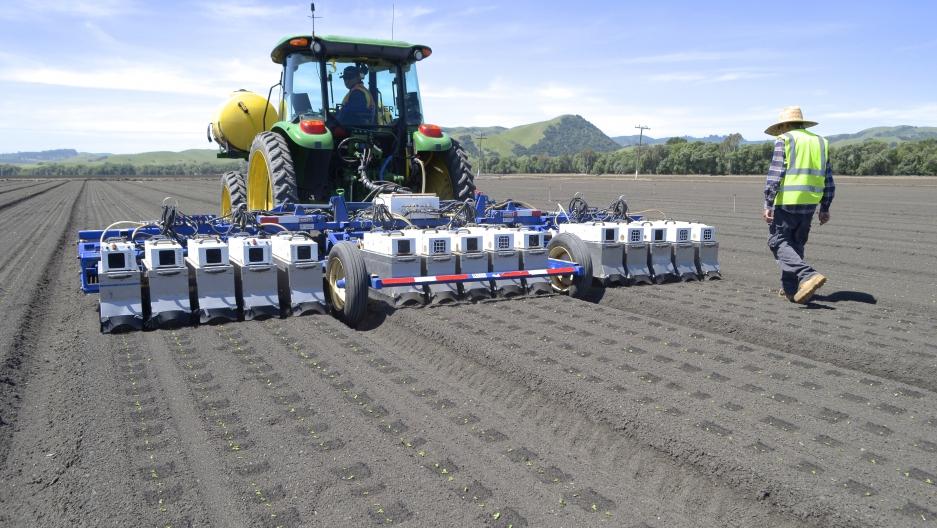 Blue River Technology’s LettuceBot uses sensors and cameras similar to those in self-driving cars to thin lettuce. Engineer Ken Hickman says the machine is “doing its own thinking” as it thins lettuce, about three times faster than a human crew.

At Lakeside Organic Gardens, a vegetable farm on California's central coast, field-workers bundled up against the sun are thinning lettuce crops, chopping out some plants to make room for others. The farm's owner, Dick Peixoto, walks through the rows, complimenting his workers as he moves along.

"Swinging that hoe from that distance, being able to pick out one plant and not the other, they're really experts at what they do," he says. "They're artists, you know what I mean?"

That's why I'm surprised at his answer when I ask him if he would replace these workers with a robot doing the same job.

Immigrants do the majority of California's field labor. But as demand grows, workers are becoming scarce. It's hard for field-workers to come to the US legally. It's dangerous for them to come illegally. The people working the fields now are getting older, and younger workers want different jobs.

"The handwriting is already up and down the wall that we'll never have the labor force that we had before," Peixoto says. "Anyone who's not adapting to that today has got their head in the sand."

Just a few miles away in Hollister, engineer Ken Hickman hikes across a vast field, planted with thousands of tiny lettuce sprouts. This field needs thinning, too, but instead of a crew of workers with hoes, a tractor is towing what looks like a sideways stack of desktop computers over the rows. It may not resemble the animated Wall-E, but the LettuceBots are using a kind of artificial intelligence, along with cameras and sensors, to choose which plants to keep and which to zap.

“Every single LettuceBot is doing its own thinking,” Hickman says.

And it's fast. Hickman says the machine can thin up to 40 acres of lettuce plantings in a day, the same amount of time it takes Peixoto's crew of 15 people to cover 12 acres.

There are six LettuceBot units currently in operation in California and Arizona, the two states which produce nearly all of America's lettuce crop. Hickman says the machines are a picture of farming's future. "Agriculture is changing, and we need to change along with it," he says.

Instead of hiring crews by the hour, growers pay by the acre for LettuceBot thinning.

Ben Chostner, vice president of business development at LettuceBot maker Blue River Technology, based in Sunnyvale, California, says the robot service is more expensive, but that the LettuceBot's computer brain and light touch can do the job better than human crews — increasing yields by up to 10 percent.

More to the point, human crews are getting harder and harder to come by. For labor-intensive crops like strawberries and lettuce, the availability of workers is as fundamental as water and sun.

The Western Growers Association, an agricultural industry group for growers in California, Arizona and Colorado, says labor shortages have reached a "critical stage."

The group founded a tech startup incubator in Salinas, California, to look for tech solutions to agriculture's most pressing problems — among them, labor.

WGA Center for Innovation and Technology head Dennis Donohue sees mechanization and automation as key to the future of agriculture, allowing growers to reassign scarce human crews to places they're most needed and leave repetitive, less-skilled tasks to robots. "I do think we will see some functions like weeding where, you know, R2-D2 is going to be doing the weeding," he says.

But there's another side to the story.

Farm labor organizer Lauro Barajas of United Farm Workers says the answer isn't less humanity in the fields, but more. The labor shortage is caused in part by broken immigration policies and poor conditions for farm workers, he says — fix those, and growers might find more people want to work for them.

Barajas says while robots aren't necessarily bad for workers — machines need operators, and those jobs pay more — the idea to replace humans with machines could have effects beyond company balance sheets.

"The machine is not paying rent, it's not buying food for their kids, it's not sending kids to school," he says. "It's just a machine."

Back at Lakeside Organic Gardens, Jose Ayala is finishing up a day of lettuce thinning. He uses a hoe to rapidly scrape lettuce plants from the sandy soil, leaving a tidy, even row in his wake. Ayala has been working these fields since he immigrated from Mexico 25 years ago and, he says, he's not worried about robots stealing his job. Help from machines might actually make it easier — he'd like to have robots do the backbreaking work for him, so he can move on to something easier.

But he remembers when people would line up alongside the fields at sunrise, looking for a day's work. Between deportations and tougher immigration laws discouraging new migrants, now, he says, "there's no one." If farms can't find more people to work the fields, maybe robots will have to do it, instead.

The truth is, they already do. According to Blue River Technology, LettuceBots thinned 10 percent of the country's lettuce last year.