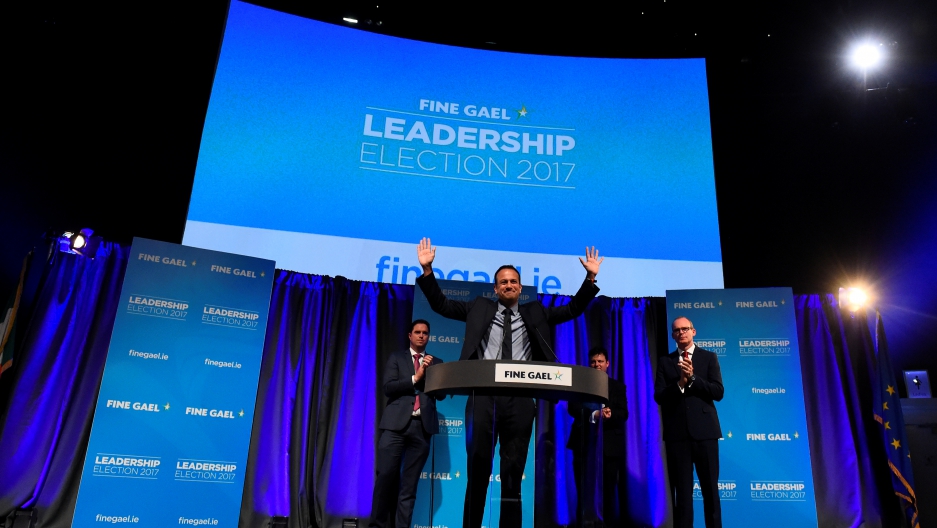 Ireland looked set Friday to have its first openly gay prime minister after the governing Fine Gael party elected Leo Varadkar leader, a further sign of change in the once deeply conservative country.

The 38-year-old son of an Indian doctor, who will replace Enda Kenny, will also be Ireland's youngest-ever premier, assuming his nomination is confirmed as expected by parliament on June 12.

His victory marks a watershed moment in Ireland, a once overwhelmingly Catholic and socially conservative country, with the Irish Times calling it a "new dawn".

In his acceptance speech, Varadkar said he was "delighted and humbled" at his win, secured with strong backing from parliamentarians, although a majority of ordinary party members backed his rival Simon Coveney.

"I think if my election as leader of Fine Gael today has shown anything, it is that prejudice has no hold in this Republic," he said, to applause and cheering at Dublin's Mansion House.

"I know when my father travelled 5,000 miles to make his home in Ireland, I doubt he ever dreamed that his son would one day grow up to be its leader."

"That despite his differences, his son would be treated the same and judged by his actions and character not his origins or identity."

Varadkar said he was "ready for the challenges ahead" as the leader of a minority administration.

One of the biggest of these challenges is Brexit — Ireland is the only member of the European Union which shares a land border with Britain.

Varadkar campaigned on same-sex marriage and liberalizing abortion laws, although like the majority of his party colleagues, he is an advocate of tight fiscal restraint.

But he has also been accused of pushing the country's centrist consensus to the right, campaigning against welfare "cheats" and promising to lead a party for "people who get up in the morning".

Gerry Adams, leader of Sinn Fein, warned: "Fine Gael will be dragged even further to right under his leadership and that can only mean further hardship for ordinary people."

The telegenic Varadkar made all the running in the race to become next party leader, attracting many early public endorsements from high-profile members of his party.

A member of Fine Gael since he was a teenager, he took 60 percent of votes in the leadership contest, while Coveney, housing minister and his only rival, took 40 percent.

The overall result including the votes of party members, local representatives and parliamentarians went in his favour, although Varadkar actually lost the popular vote by 35 percent to 65 percent.

Varadkar attracted 51 of 73 parliamentary party members against 22 for Coveney. But there will be concern that the grassroots appear to consider him second best.

Kenny has been Fine Gael leader for 15 years and prime minister for six years, since his coalition government took office in 2011.

Viewed as a capable if somewhat unspectacular leader who pulled Ireland back from the brink after it was laid low by the financial crisis, Kenny will step down when Varadkar is confirmed by parliament