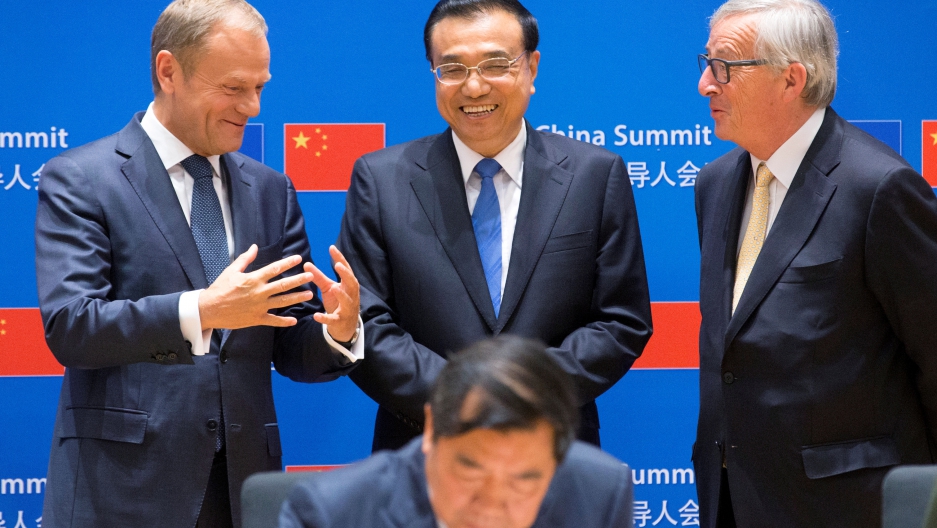 China and the European Union Friday affirmed their joint commitment to the Paris climate agreement, signaling a shift in diplomatic relations just a day after President Donald Trump announced the US would withdraw from the pact.

At a joint news conference in Brussels, European Council president Donald Tusk said, “Today we are stepping up our cooperation on climate change with China, which means that today, China and Europe have demonstrated solidarity with future generations and responsibility for the whole planet."

“We are convinced that yesterday's decision by the United States to leave the Paris agreement is a big mistake,” Tusk continued. “But the fight against climate change and all the research, innovation and technological progress it will bring will continue with or without the United States.”

China and the EU released a joint statement at the meeting, saying the two parties “consider climate action and the clean energy transition an imperative more important than ever.”

A spokeswoman for the Chinese foreign ministry, Hua Chunying, said China was ready to take a leading role in the fight against climate change.

"In the future, China will continue to tackle climate change in all ways,” Chunying said. “China is willing to increase cooperation with all sides and jointly promote the follow-up talks on actual detailed rules of the Paris agreement.”

The EU-China bilateral statement was a key sign of the diplomatic re-shuffling likely to come in the wake of President Trump’s dramatic announcement at the White House.

Here’s why the joint EU-China statement is so symbolic

A bilateral climate agreement in 2014 between the world’s two biggest emitters, China and the US, helped pave the road to Paris by building political will for the hard-fought climate pact.

The loss of the US as a partner in climate action is a big blow to Beijing.

“On the other hand, it does open up the possibility of China asserting leadership in a way that it has not done before,” says Isabel Hilton, CEO of the bilingual environmental news website ChinaDialogue.net.

But Beijing is not likely to take the lead on its own.

“China is not hugely practiced, I have to say, at asserting multilateral diplomatic leadership,” Hilton said. “So I think China is looking for new partnerships."

Friday’s bilateral announcement signals that China might have found its new partner in the European Union.

“It’s quite unusual for these EU-China summits to produce a bold diplomatic statement, so this is pretty unprecedented, and it’s a sign of the commitment of both sides to continuing to work on climate mitigation,” Hilton said.

China is already the world leader in solar and wind investments. It spends $100 billion annually on clean energy, according to the Institute for Energy Economics and Financial Analysis, and made a record $32 billion in overseas investment deals in 2016 alone.

That was a 60 percent increase in spending from the previous year.

China will look to continue its expansion in renewables with the shift in US energy policy.

“It clearly sees this as the future for economic growth,” said Alvin Lin, from the Natural Resources Defense Council’s Beijing office.

“It’s going to be continuing to build the most new wind and solar power plants in the world of any country,” Lin said, “and it’s also going to be looking to how it can help other developing countries that need clean energy.”

In addition to expanding its global economic reach in the wake of the US climate pivot, Chinadialogue.net’s Isabel Hilton said China will now also be looking to expand its diplomatic influence.

“China sees this as an opportunity to present itself as a responsible partner, to consolidate friendships, and to make a claim for, if you like, moral high ground, which has not been terribly easy for China to do,” Hilton said. “And that kind of soft power and economic engagement is going to translate very much into political influence.”

China and the EU’s reaffirmation of their commitment to the Paris agreement Friday comes amid a wave of international support for the hard-fought 2015 climate pact.

Christiana Figueres, who served as the executive secretary of the United Nations Framework Convention on Climate Change during the Paris process, said she was “quite happy” about the global reaction to the US move.

“[The US] has detonated this amazing wave of support and deepened commitment, it’s just fantastic,” Figueres said.

Figueres clarified that she is not happy that President Trump pulled the US out of the Paris agreement. But she is happy with how international leaders have reacted to the move in Washington.

“We have seen, from every corner of the world,” Figueres said, “every country around coming out to say that this is good for their economy, and they remain committed to the Paris agreement.”

India’s Prime Minister this week re-affirmed its commitment to the agreement in a meeting with German Chancelor Angela Merkel. Small island nations, individual European leaders, and even Russia, the largest emitter that has yet to formally adopt the agreement, said Friday it was likely to do so by 2020.

At an economic summit Friday in St. Petersburg, Russian President Vladimir Putin uncharacteristically switched to English to tell reporters there was no need to panic about the United States’ decision on climate change.