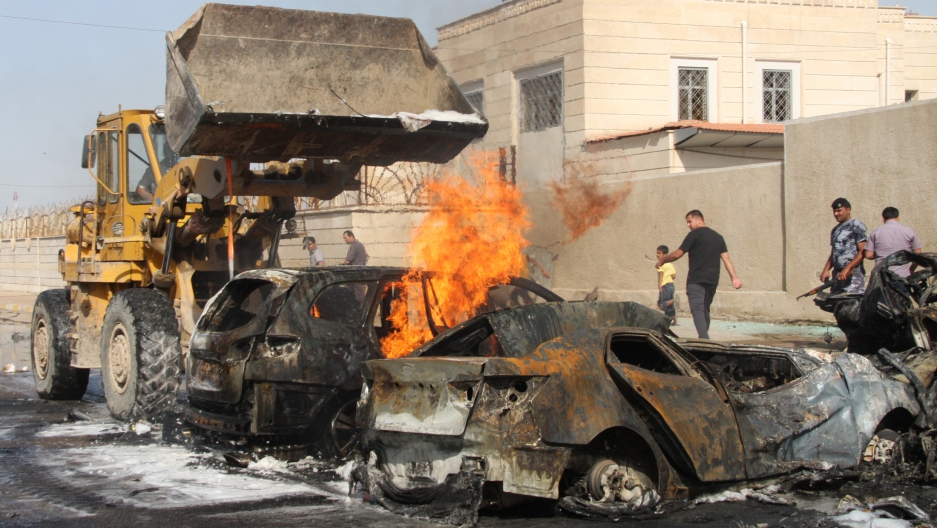 A bulldozer attempts to extinguish a fire in a destroyed vehicle at the site of a bomb attack in Baghdad.

In the city of Mosul, the fight between Iraqi forces and ISIS fighters unfolds block by block — and bulldozers are leading the charge.

Mosul is critical to both sides and, although ISIS retains control over only a few neighborhoods in the western part of city, its fighters are entrenched, digging trenches and planting bombs along the streets. Through eight months of almost constant combat, Iraqi forces have come to rely on bulldozer drivers to clear a path forward.

According to Washington Post reporter Thomas Gibbons-Neff, the Pentagon has sent more than 100 Caterpillar D7R bulldozers — armored and reinforced for military use — to Iraq since May 2015.

They can do everything a normal bulldozer can, says Gibbons-Neff, "they can just do it while they’re getting shot at.”

The bulldozers are used to clear obstacles, to provide cover for infantry troops, and to deflect anything from rocket propelled grenades to car bombs. While tanks are large, wide, and require more than one person to operate, bulldozers can be controlled by just one person and are more maneuverable.

“If advancing forces need to fortify their position, they can just [put the bulldozer blade] down and move a car into the middle of the street to block it. Meanwhile a tank would probably just run over the car,” says Gibbons-Neff.

The strategy for urban warfare compliments the “piece-by-piece, step-by-step advancing style” Iraqi soldiers have used to fight ISIS as they pushed through Ramadi, Fallujah and eastern Mosul, he says.

“It’s just one of the things you see as bred out of necessity. It’s how they’re fighting, and [bulldozers] are the perfect vehicle to facilitate that fight."