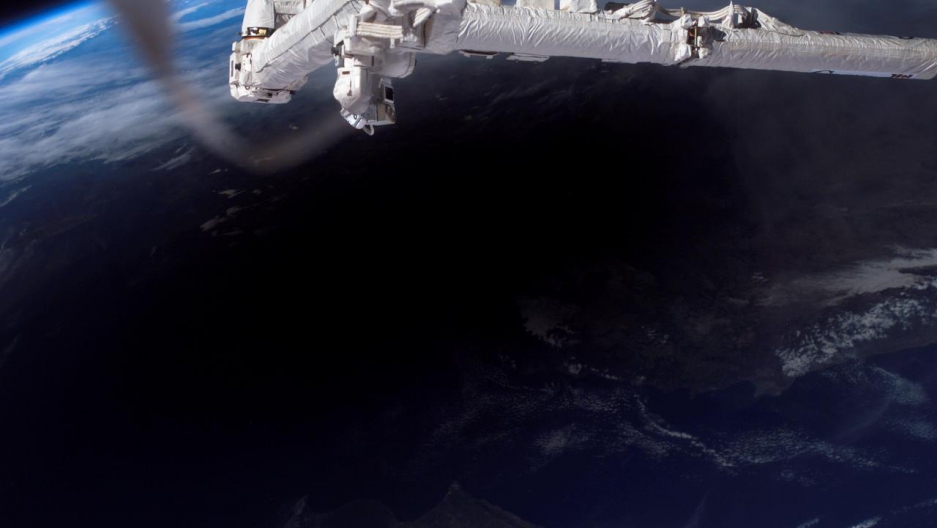 The shadow of the moon falls on Earth during a total solar eclipse on March 29, 2006, as seen from the International Space Station. The photo was taken by the Expedition 12 crew.

On August 21, the continental United States will experience its first total solar eclipse in nearly four decades. With the eclipse’s path stretching from Oregon all the way to South Carolina, cities like Kansas City, Missouri, and Nashville, Tennessee, will be swathed in daytime darkness for a few minutes — and at least a partial eclipse will be visible around the country.

For eclipse onlookers, the effect may be eerie: “If you’re a rabbit and the shadow of a hawk passes over you, you know that something’s wrong,” says astronomer Matt Penn, of the National Solar Observatory. “And maybe that’s a similar feeling that we have as the shadow of the moon passes over us.”

But for Penn and other solar scientists, the eclipse will provide an opportunity to study a part of the sun we rarely see without special equipment: its corona, or plasma outer atmosphere. During total eclipses, the moon passes between Earth and the sun, blocking the bright disk of the sun and making its dim surrounding aura visible.

“When any part of the bright solar disk is visible, you need special solar viewing glasses to protect your eyes,” Penn says. “But it's key that when ... the last bit of the bright sun is covered up, you can take off these solar glasses and just look at the corona with your naked eye. It's about as bright as the full moon.”

The corona is a million times fainter than the bright solar disk we normally see in the sky, says Shadia Habbal, an astronomy professor at the University of Hawaii at Manoa. Yet despite its comparative dimness, the corona is hundreds of times hotter than the surface of the sun.

Habbal calls the corona’s heat its biggest puzzle. “We’re still trying to figure out what are the processes that are allowing this gas to, all of a sudden, get hot.” She’s recorded the corona with a camera during total eclipses, looking for colorful clues that could help explain the region’s sweltering heat.

“You have some elements in the corona — for example, all the elements you find on Earth: iron, chromium, nickel, whatever,” she says. “They have been stripped of a large number of electrons because it’s so hot, and as they’re losing all these electrons and they get ionized and excited, they emit a certain light of a certain color.”

Penn will be recording the corona during August’s eclipse using a different setup: a network of 60 telescopes across the country, operated by citizen scientists and school groups.

“So, the idea is that at any one location ... you'll see the corona for about two minutes,” he says. “But by having a string of telescopes across the country, it will take 90 minutes for the shadow of the moon to move from Oregon to South Carolina.”

“And so if we can stitch together the data from all of our telescopes, we’ll be able to observe the dynamics and the changes in the corona over a 90-minute period of time.”

Penn hopes data from the project — called Citizen CATE — will shed some light on the mysteries of solar weather. “One thing that we think as we’re going to see in our data are these polar plumes,” he says. “So, above the north and the south poles of the sun, we expect to see these really thin threads of gas which are constrained by magnetic fields.”

At the bottom of the polar plumes, gas doesn’t move much, he explains. “But at the top of these plumes, about two solar radii, we know that the gas is moving about 60 miles per second, it’s really flying.” The phenomenon, he says, is linked to the solar wind.

“So, one of our goals is to understand how the solar wind is accelerated, to get some basic understanding about how we can then predict solar weather better, or space weather better.”

When the eclipse ends, Penn will incorporate the Citizen CATE telescope data into a movie of the event. (It will be available on YouTube, for curious sungazers.)

But from Habbal’s description, nothing beats watching the corona emerge in real time during an eclipse. “It’s an incredible sensation when you see the corona appear,” she says.

“I mean, this is what’s so fantastic. All of a sudden, everything dims and then you have this gorgeous aura of light around the sun that just comes out. And you have the impression that the streams are going out to infinity.”

This article is based on an interview that aired on PRI's Science Friday. For more info about viewing the upcoming eclipse in the United States, check out NASA’s guide.