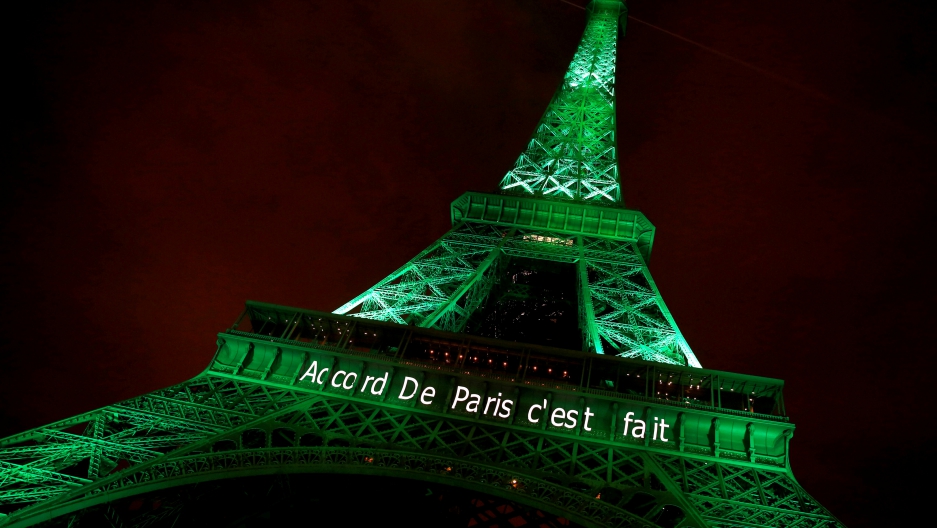 The Eiffel tower is illuminated in green with the words "Paris Agreement is Done", to celebrate the Paris U.N. COP21 Climate Change agreement in Paris, France, November 4, 2016.

Donald Trump has decided to pull the United States out of the Paris climate accord, US media reported Wednesday, as the president kept the world guessing -- saying an announcement will come in the "next few days."

An American pullout would deal a devastating blow to global efforts to combat climate change less than 18 months after the historic 196-nation pact was signed in Paris, fruit of a hard-fought agreement between Beijing and Washington under Barack Obama's leadership.

Trump said early Wednesday an announcement was imminent on whether the United States will remain part of the landmark deal on cutting carbon emissions.

"I will be announcing my decision on the Paris Accord over the next few days. MAKE AMERICA GREAT AGAIN!" the president tweeted, as several US media reported he had made up his mind to quit the accord.

The Axios website was first to report Trump's decision was made, citing two sources with knowledge of the matter, while other media including CNN, CBS, ABC and Politico reported the White House was expected to announce a withdrawal once details of the process have been worked out.

The United States is the world's second biggest carbon emitter, after China.

Under Obama, Washington had pledged to reduce greenhouse gas emissions by 26-28 percent below 2005 levels by 2025.

Under Trump, who once called climate change a "hoax," the country has resisted intense pressure from its partners to commit to respecting the global accord.

Since taking office on January 20, however, Trump has sent contradictory signals on the Paris deal -- reflecting the different currents within his administration, on climate change but also on the wider issue of the United States' role in the world and their relation to multilateralism.

White House spokesman Sean Spicer, asked on Tuesday whether Trump believes human activity is contributing to climate change, told reporters, "Honestly, I haven't asked him that. I can get back to you."

The head of the Environmental Protection Agency Scott Pruitt, who met with Trump on Tuesday, has overtly advocated quitting a deal he judges "bad" for America.

Other top Trump advisers, including daughter Ivanka and Gary Cohn, the head of the president's National Economic Council, are said to favor staying in the treaty.

And the corporate world has by and large come out in favor of the US keeping its seat at the table. A dozen large groups including oil major BP, agrochemical giant DuPont, Google, Intel and Microsoft, have urged Trump to remain part of the deal.

Trump's position on the Paris accord was a focal point of last week's G7 summit in Sicily in which leaders of the world's six other largest industrial democracies pressed him to renew the US commitment to the deal.

A frustrated German Chancellor Angela Merkel later warned that Europe "must take its fate into its own hands," citing the differences with Washington on climate change as evidence of their divergent paths.

She described the discussion as "very difficult, not to say very unsatisfactory."

US Defense Secretary Jim Mattis responded in a television interview Sunday, assuring that Trump was "wide open on this issue as he takes in the pros and cons of that accord."

UN Secretary-General Antonio Guterres has weighed in, arguing on Tuesday that the United States should not leave the Paris Agreement.

"But even if the government decides to leave the Paris agreement, it's very important for US society as a whole -- the cities, the states, the companies, the businesses -- to remain engaged," he said.