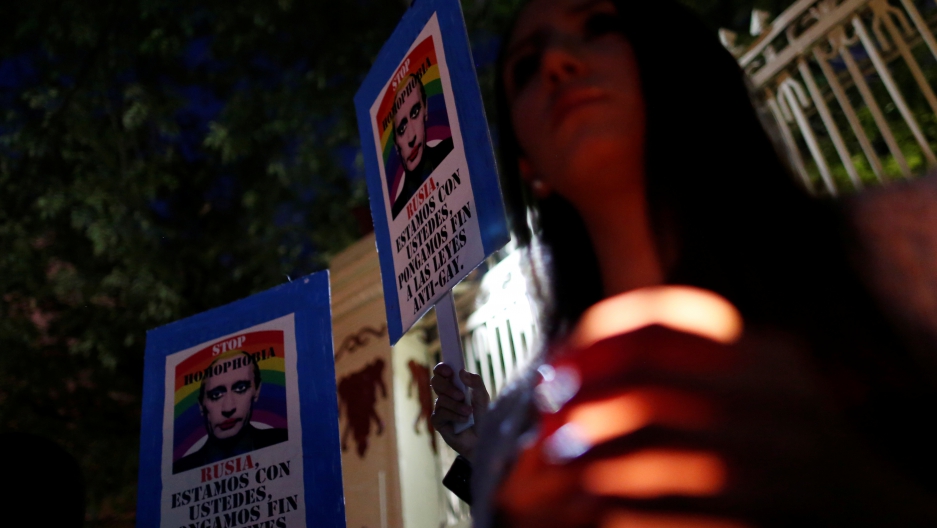 Members of the LGBT community hold a placard with the picture of Russia's President Vladimir Putin during a protest outside the Russian embassy, for the constant discrimination and violence against the gay community in Chechnya and other regions of Russia, in Mexico City, Mexico, April 20, 2017.

Russian Foreign Minister Sergei Lavrov on Tuesday insisted there were "no facts" in reports about the persecution of gay men in Chechnya, as he batted away criticism levelled by French leader Emmanuel Macron.

"We don't see one concrete fact either about hackers or about some secret probes into election meddling in almost every Western country, or on the issue of accusations of rights abuses of LGBT representatives in Chechnya," Lavrov told journalists.

"If there are facts, if there are surnames then our answers will be concrete. But I repeat that we have no relation to the majority of the allegations."

Macron on Monday pressed Russian President Vladimir Putin over an alleged crackdown on gay men in the North Caucasus region of Chechnya as they met for the first time in Versailles.

Macron said Putin promised "the whole truth" about the reported persecution and insisted France would be "vigilant" on the issue.

It said more than 100 gays had been arrested in the region, where homosexuality is taboo, and that two people had been killed by relatives and a third died after torture.

AFP has spoken to gay men in hiding after fleeing Chechnya who recounted how they were detained and abused in the campaign.

The men refused to give their names and have not lodged official complaints with the police for fear of retribution.

Russian officials initially dragged their heels on the allegations but earlier this month Putin backed an official probe after German Chancellor Angela Merkel confronted him on the issue.

Chechnya has been ruled with an iron fist by Kremlin loyalist Ramzan Kadyrov for the past decade, with critics accusing him of creating his own fiefdom built on widespread rights abuses perpetrated by a personal security force, the Kadyrovtsy.

Kadyrov hit out at Macron for "using untruthful information" and invited Macron and Merkel to visit the region "to search for the truth".

Lavrov also took aim at Macron's attack on Kremlin-funded outlets RT and Sputnik as "organs of influence and propaganda" against him in the May presidential election.

Lavrov said the allegations "reflected the well-known inertia of the anti-Russian campaign" as ties with the West slumped after Moscow's seizure of Crimea from Ukraine.