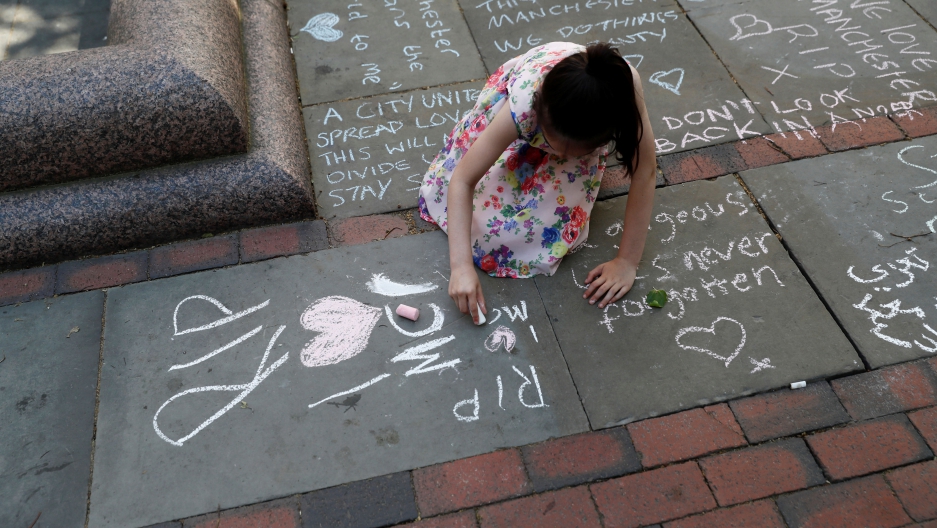 A girl writes a message in chalk on the pavement after the bombings in central Manchester, Britain on May 26, 2017.

Suicide terror attacks in the West — like last week's bombing in Manchester — are statistically rare. They’re so rare that attacks in Western Europe represent a mere .13 percent of all such attacks in the last decade. But these are the headline-grabbers, the attacks that see more press coverage and receive more attention than most attacks.

The Manchester bombing, which killed 22 and wounded dozens more, was the second suicide attack in the UK — the first being the 2007 attacks in London, which killed 52. In the UK, the national terrorism threat level had been “severe” — meaning that an attack was highly likely — for 998 days before the bombing.

This attack is statistically rare, but at the same time is part of a sharply rising trend: Suicide attacks are on the rise.

Using data from the University of Maryland’s Global Terrorism Database (GTD), we looked at fatal and non-fatal incidents tagged as suicide attacks. A suicide attack, according to the GTD, is an incident where evidence suggests the perpetrator did not intend to escape alive after the attack.

The trend line is clear: Beginning in 2010, suicide attacks surged and have continued unabated.

The increase is fueled partly by the rise of ISIS and changes in recruitment techniques, experts said.

Bloom said groups like Boko Haram have “expanded the franchise” to include women, children and the elderly. Propaganda and recruitment materials are catered toward different age groups.

“They’re using social media, they’re using TV, they’re using online gaming to encourage this,” Bloom said. “All different platforms, depending on their age. All they say is, 'how wonderful it is to be a bomber.' ”

There is also a growing competition amongst terrorist groups. Suicide terrorism is a “very showy tactic,” Bloom said. “You are trying to show the base ‘we are the toughest dudes on the block.’”

Robert Pape, professor of political science at the University of Chicago and director of the Chicago Project on Security and Terrorism, said the rise can be attributed to a fight over territory.

He points to a string of high-profile terrorist events: the bombing in Ankara, Turkey in 2015; attacks at a sports stadium in Paris; bombings in Brussels in March 2016; the truck attack in Nice in July 2016.

The targets of these attacks have less to do with religion than retaliating against military intervention and lost territory, Pape said.

“This is not just some general attack against Christians, wherever you can attack them,” he said. “Understanding it’s about the territorial loss allows us to bound the expectation of the threat, and  to see why it ebbs and flows.”

Suicide attacks are hard to count, mainly because it depends on definitions and sourcing. The Global Terrorism Database relies on computers to flag news accounts from multiple languages and then a team of experts analyzes each event before it goes into the database.

Still, events aren’t always reported and it’s likely the numbers we do have are not entirely representative of all attacks. Despite difficulties counting, experts agree that the last decade has seen an increase in its frequency as a terrorist tactic.

Bloom keeps her own data on terrorism attacks and said incidents carried out by Boko Haram and other terrorist groups in Africa frequently go uncounted.

Pape’s data from the University of Chicago actually shows a drop in the number of incidents from 2015 to 2016. The numbers from 2016 still point to the sheer increase in the frequency of these types of events in the last decade. (More thorough analysis of Pape's 2016 numbers is not yet available.)

According to Pape, suicide attacks have risen in response to military intervention, and from more groups than just ISIS.

“Suicide terrorism is spreading with military intervention and civil wars,” Pape said. “The groups are learning that the suicide attack pays — they’re able to inspire more and more people to use this tactic and that’s why it’s growing.”

He also said the trend is unlikely to change in the near future, despite the drop he measured in 2016.

“It will continue as long until we really do finish the operation against ISIS in Iraq and Syria,” he said. “ISIS has lost well over half of its territory, it’s almost been kicked out of Mosul. We should expect the motives for these attacks are going to continue.”