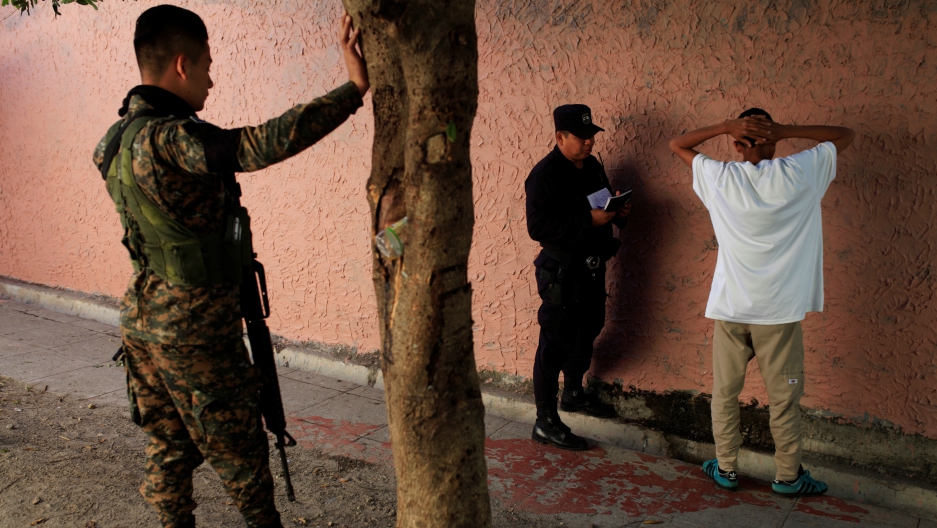 Ana Riva was at work one day in 2015 when she got an urgent call from her 16-year-old nephew, Juan. It was a moment that she had always feared would come, since she took over raising Juan after his mother left for the US.

Now, here it was. A local gang had him surrounded, insisting he join.

"They demanded money when they threatened him. They wanted him to pay them a sum of money immediately," says Riva. "He called me totally scared. I mean, they had guns to his head."

She left work immediately and called other relatives to help.

"We had to get him out of that place because he received a death threat," says Riva. "He was told he had to join the gang or they would kill him."

For their safety, we aren't using Juan's real name or Riva's. Gangs already found Juan once after he was sent somewhere to hide. Now he is hiding inside his aunt's apartment, and they are terried he will be discovered again.

"He's been inside my apartment for one year now. He only goes out onto the patio," Riva says. "He doesn't have any freedom. If he gets sick, I have to hide him [to] take him out."

"He's been inside my apartment for one year now. He only goes out onto the patio," Riva says. "He doesn't have any freedom."

Gang recruitment in El Salvador starts young. When kids say they don't want to join, gangs often threaten to kill them. It's led to tens of thousands going into hiding, or fleeing.

Many of these kids started coming across the US border. In December 2014, the Obama administration rolled out the Central American Minors (CAM) Program, which gives young people the option of asking for US asylum while still in their home country. With this program, a US immigration official hears the case without the child having to make the dangerous trek north.

According to a State Department spokesperson, 11,000 Central American kids have applied since the program started, and just over 2,800 have been admitted and are now living in the US — though many of them only received a temporary visa. Despite fears from refugee resettlement groups that a de facto halt to refugees entering the country may be in place, the spokesperson says over 200 CAM cases were resettled in the US during March and April of this year.

Juan's family initially decided he should make the trip to the US. They thought he would have a good chance at gaining asylum, and his mother would be there to receive him. But he only made it as far as Mexico, where he was picked up by Mexican authorities and sent back to El Salvador. It was a harrowing experience, his aunt says. That's when Juan went into hiding inside his aunt's apartment and applied for asylum through CAM.

"The idea behind CAM was to provide a safe and legal alternative to that journey and allow children to apply for permission to live in the US without ever having to leave home," says Faye Hipsman, an analyst with the Migration Policy Institute.

CAM was meant to decrease the number of unaccompanied minors arriving from Central America. While a good in theory, Hipsman says, it hasn't done much.

"In 2016, the last fiscal year, 60,000 unaccompanied minors still came to the US despite CAM being operational," she says.

Hipsman pointed out that CAM has an important "limitation." It requires children to have a parent who is lawfully present in the United States.

"This is an issue because the majority of immigrants in the US from Guatemala, Honduras and El Salvador are actually unauthorized," says Hipsman. "So [these] families are ineligible for the program."

"A recent assessment showed that average cases take 400 days, so over a year, to be processed," she says. "And for children who are in serious danger, they don't have that time to wait, they'll just leave."

Advocates worry that many vulnerable kids are being left out.

Marina Ortiz is a Salvadoran human rights attorney. She finds CAM selection "completely arbitrary," based on her experience applying on behalf of a young person she believed fit the criteria well. Ortiz has helped many scared youth find a route to safety. She's seen some young people successfully gain entry to the US using the CAM program, but the one client she pursued a CAM case for was rejected by the US ambassador, she says.

"The consulate is obligated to review all the documents and tell us why my client didn't qualify, why my client was not eligible. But nothing. They didn't tell us anything," says Ortiz.

El Salvador remains one of the most deadly countries in the world, especially for young people threatened by gangs, and fleeing the country is the only option for many of these kids.

So it was with alarm that the leftist FMLN government watched as newly elected President Trump tried to stop all refugees entering the US.

"Remember, we have a very unpredictable president in the United States," says Aquiles Magaña, who runs a government agency that deals with issues of migration. "We don't know for how long he's going to be sustaining this harassment against communities."

Faye Hipsman of the Migration Policy Institute says inside the Trump administration there are staunch critics of the CAM program.

"The program is absolutely on the administration's radar," Hipsman says. "There was a lot of opposition to CAM initially from members of Congress. And many of the people on the Hill who were critics of the CAM program when it was launched are in the Trump administration today."

One of the most outspoken senators against CAM was Jeff Sessions, who is now Trump's attorney general.

"Nearby, in my community, when young people have been threatened by gangs and they haven't had any options to escape, the gangs killed them. That's how it is here," says Riva.

Back in El Salvador, Juan is still waiting to hear about his asylum prospects after his CAM interview months ago, says Riva. She fears the worst if he is denied.

"Nearby, in my community, when young people have been threatened by gangs and they haven't had any options to escape, the gangs killed them. That's how it is here," she says.