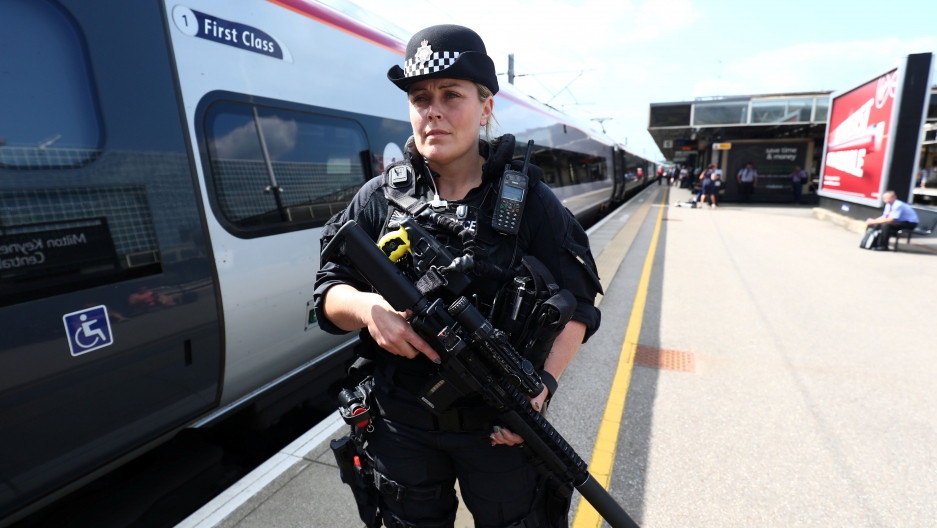 An armed police officer patrols on a platform at Milton Keynes Central station after the terror threat level was raised to "critical" following a suicide bombing in Manchester.

The suspect in the Manchester bombing, Salman Abedi, wasn’t unknown to UK counterterrorism officials. In fact, members of the Libyan community where Abedi lived had reported him before, worried about some of the views he was expressing.

That kind of keeping an eye out, as a community, is exactly what the “Countering Violent Extremism” program wants to encourage in the US.

The Department of Homeland Security’s CVE program gives grants to state, local and community organizations to help them “address the root causes of violent extremism” and prevent people from becoming radicalized both online and in the real world. As President George W. Bush put it in 2006 — the US needs a national security strategy that is “not just a battle of arms, but a battle of ideas.”

Farah Pandith, one of the architects of CVE, says the bombing in Manchester is an example of how local communities are the first line of defense. “When a young person begins to act differently, think differently, behave differently — it is oftentimes people within the home and then within the neighborhood and their peer group that begin to see those changes,” she said. “That's why it's so important to actually build bridges with local communities and to understand what's happening at the local level.”

But CVE has its share of critics on the left and the right. Civil liberties advocates say it’s pretense for gathering intelligence on and investigating Muslims. Conservatives say the program obscures the biggest threat to national security because it doesn’t focus solely on Islamic terrorism.

Ironically, both sides may soon get their wish to see the program end. The White House’s new budget proposal would slash all funding for CVE, bringing the $50 million allocated for the program down to zero in the next fiscal year.

The White House has frozen $10 million in grants as Congress deliberates over the budget.

The Trump administration and conservatives favor a law enforcement approach over community outreach when it comes to fighting radicalism. Back in February, Trump was considering renaming the program Countering Islamic Extremism or Countering Radical Islamic Extremism, so it would no longer focus on groups such as white supremacists who have also carried out bombings and shootings in the US.

Related: White supremacists are killing in the name of an ancient Nordic religion

Pandith said that different forms of radicalization are connected. “It is no accident that there is an increase in far-right movements and expression at the same time that there is an increase in people being interested in groups like ISIS. What we have to do is to push back against the rise of hate globally — in all forms — and we have to invest in local solutions.”

Part of the problem, she said, is that it’s not easy to measure the impact of something as complex as CVE. “It’s very mushy, and policymakers are not good with mush.”

If the goal is to defeat ISIS, Pandith says, stopping recruitment is the first step. That would require “a five-to-10-year commitment with resources at a larger scale,” as well as specific programs with enough nuance to adapt and react to new recruitment strategies.