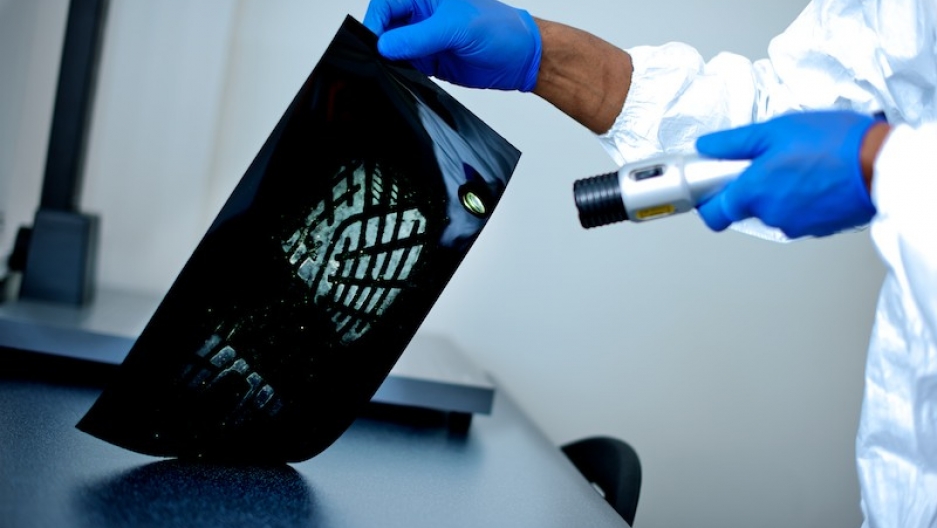 A forensic investigator lifts a shoeprint.

On TV crime shows, forensic science always just manages to pinpoint the criminal in the span of a televised hour — and with 100 percent accuracy. But in real life, forensic science doesn’t always work so smoothly.

In 2009, the National Academies of Sciences, Engineering, and Medicine released a report that sharply questioned the scientific basis for many common techniques in the field — such as matching hair samples, bite marks and even crime scene fingerprints to suspected wrongdoers.

In the wake of the National Academies’ critique, President Barack Obama established the National Commission on Forensic Science in 2013: an advisory group of independent scientists, lab directors, lawyers and others tasked with bringing scientific rigor to the field. But this past April, Attorney General Jeff Sessions allowed the commission’s charter to expire. Now, an internal task force at the Department of Justice will guide forensic science reform — and may rely more on contributions from law enforcement.

But two forensic experts say that what forensic science needs right now is more science. West Virginia University forensic chemistry professor Suzanne Bell, who was a scientist in the former commission, explains that the current field is a hodgepodge of practices from both science and law enforcement.

“DNA analysis in forensic chemistry — which I work in — really grew out of science and then was applied forensically, whereas disciplines like firearm toolmarks, latent [fingerprints] were developed principally in the law enforcement arena,” she says. “Doesn’t mean they’re not valid, but they really have a different heritage to them.”

In the practice of latent fingerprinting, in particular, she says, there’s been “excellent work” done recently. But for many forensic experts, concerns about the scientific validity of other techniques — like bite mark or hair analysis — have only deepened since the National Academies’ report.

Bite marks have “been pretty well discredited to this point,” Bell says. “The science or the underlying assumptions of bite mark analysis was that A, human dentition is unique, and B, that when you make those marks in skin, the skin will reflect that uniqueness. And both of those have been pretty well disproven. It’s a subjective method.”

In 2015, the FBI admitted that in more than 95 percent of cases reviewed, its hair sample analyses skewed to favor the prosecution. For Betty Layne DesPortes, a defense attorney and president of the American Academy of Forensic Sciences, the FBI admission is one example of the cognitive bias that can plague some forensic techniques.

“And it shows that circular kind of validation that has happened with some of these pattern-matching disciplines that grew up within law enforcement,” she says. “It’s where law enforcement uses something to identify a suspect and then later uses the same technique in convicting a suspect.”

In a report issued last year, PCAST, a group of science and technology advisers to President Obama, found that several major “feature comparison” techniques have not been subject to rigorous scientific evaluation. The group said that some techniques — like analyzing bullets for marks from firearms — could be useful, but need more supporting research. They suggested that others, like some comparisons of shoe treads to crime scene prints, are “unsupported by any meaningful evidence.”

“As the PCAST report indicated, there have been a lack of empirical studies — the type of studies that show that the analysts, when they do these techniques, are getting the right answer — in many of these disciplines,” DesPortes says.

“And so we need to have this research done. And for that we need funding. We also need the cooperation of the broader scientific community.”

Until that happens, DesPortes says, questionable forensic evidence is finding its way into courts, where additional review isn’t guaranteed. “Unfortunately in a lot of states, the standard for an indigent defendant trying to get expert assistance from the court — you have to, essentially, have an expert to show why you need an expert. And it’s very, very difficult.”

Or as Bell explains, it’s another case of real life diverging from the crime shows. “That’s one of the things I think folks don’t always appreciate, is that you see on TV where suspects get the Miranda warnings — you have the right to an attorney, if you can afford one or not,” she says. “But you don’t have the same right to scientific review.”

Bell and DesPortes both agree that there are paths forward for the field of forensic science. “One of the things that came up in the National Academy report was a recommendation for a federal-level agency that would be responsible for forensic science, where it would be independent from both prosecution and defense,” Bell says.

“And I think that’s something that’s important and should be considered, because … forensic science needs a champion that is scientifically independent.”

DesPortes, meanwhile, notes that there have already been some advances. “There are moves towards more laboratory accreditation and certification of analysts, and that helps to improve the quality of the work coming out of a laboratory,” she says.

“I do think, however, we do need more oversight — and, as Dr. Bell was saying, a champion for forensic science to ensure that there’s adequate funding for all of these measures.”