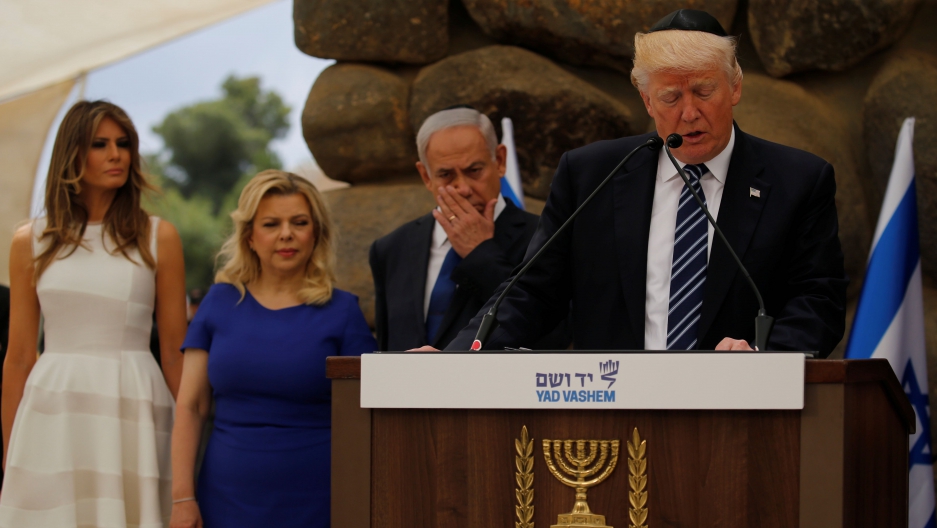 President Donald Trump delivers a speech during a ceremony commemorating the 6 million Jews killed by the Nazis in the Holocaust, in the Hall of Remembrance at Yad Vashem Holocaust memorial in Jerusalem, on May 23, 2017.

Jonathan Ernst/Reuters/TPX Images of the Day

From the moment Air Force One touched down on the runway at Israel’s Ben Gurion Airport, President Donald Trump and his wife Melania, as well as their hosts, Prime Minister Benjamin Netanyahu and his wife Sara, provided Israelis with seemingly endless opportunities for giggles, laughs and snark.

For most leaders, and in most countries, red carpet affairs are fairly staid and uneventful, following set protocols. But to state the obvious, neither Trump nor Israel's leaders are like most.

As they strode down the red carpet, the Netanyahus walked hand in hand — prompting lifestyle columnists to remind their audiences that the prime minister and his wife are not known for their happy marriage. Yet they looked positively blissful compared to the Trumps, whose barbed body language was clear to all. When Trump tried to take his wife’s hand, she did not respond. Insistent, he tried to grab her hand — and the cameras clicked and the tongues clucked as she flicked him away.

While the men talked about the special relationships between the two countries, Sara Netanyahu referred to a different kind of special relationship between the two families. In a somewhat insipid attempt at small talk in less-than-fluent English, caught on an open mic, Sara Netanyahu told her counterpart, “You know in Israel, all the people like us. The media hate us, but, the people love us. Like you.”

“The majority of the people in Israel, unlike the media, love us. So, we tell them how you [the Trumps] are great, so they love you.”

Even Trump, hardly known for subtlety or ceremony, must have been surprised when Israel’s baddest political bad boy, parliamentarian Oren Hazan, suddenly grabbed Trump by the shoulder, flipped out his smartphone, put his arm around the president and snapped a selfie. Hazan wasn’t even supposed to be on the dignitaries’ reception line.

Netanyahu tried to grab the phone away, but Hazan was too quick for him.

Thank you, Mr. President
- it was my pleasure! @realDonaldTrump pic.twitter.com/0TMFzluPN3

As they progressed down the receiving line, Israel’s Public Security Minister Gilad Erdan apparently wanted to make Trump feel at home by providing him with some locally manufactured fake news: Long after police had officially announced that a vehicular incident in Tel Aviv was a traffic accident and not a terrorist attack, Erdan insisted to the president that the matter was still being investigated.

Only a few minutes later, sweating in the sun on the podium, Trump sat in an affirmative manspread between President Reuven Rivlin and Netanyahu, his hands on the knees of his comrades. “Ruby Rivlin is all, ‘Dude, is that your *hand* on my *knee*?’” tweeted a discerning observer.

Ruby Rivlin is all, "Dude, is that your *hand* on my *knee*?" pic.twitter.com/nsYWmOZaOm

And all that before they even left the tarmac.

That evening, contradicting its own policy, the White House identified Jerusalem as Israel's capital on its website. But at least they got the spelling right. In one press release published just before the president and the prime minister were scheduled to meet, US officials declared that one of the major goals of the trip is to "promote the possibility of lasting peach." In another statement released that evening, the White House announced that Trump would be visiting “Vad Vanshem,” which should be spelled Yad Vashem (a Holocaust memorial).

The White House could definitely use a new proofreader. (And Vad Vanshem would be a great name for a Bond villain.) pic.twitter.com/T6btvHz8KX

While in Israel, Trump became the first sitting president to visit the Western Wall, a Jewish holy site not officially recognized as Israeli territory. It is traditional for visitors to the wall to slip handwritten entreaties to God into the stones’ tiny nooks and crannies. Ever the traditionalist, Trump, too, put a note into the wall — but seemed, according to one camera angle, to have found a space large enough for his entire hand and wrist.

What, watchers on Twitter wanted to know, was he doing in there? Grabbing something, perhaps?

Most of the answers to that one were pretty predictable, although some did suggest that he was hiding his tax returns.

And what, Facebook friends asked, had he written on his note? Commenters offered possibilities: “Dear God. This is a really fabulous wall. Really fabulous. Can I have one too?” suggested one. “Who paid for you,” suggested another.

"Who paid for you?" he whispered. But the old wall keeps her secrets. pic.twitter.com/xplQhXvzQ3

Even Trump’s visit to Yad Vashem, Israel’s somber memorial to the 6 million Jews murdered in the Holocaust, provided an unintended opportunity for humor. In the memorial guest book, Trump wrote, “It is a great honor to be here with all of my friends — so amazing + will never forget!”

Tweeted Raoul Wootliff, a local reporter, “He forgot: ‘See you next summer.’”

@realDonaldTrump @PresidentRuvi This is @realDonaldTrump's message in Yad Vashem's Book of Remembrance. "So amazing + will NEVER FORGET!"
(He forgot: "See you next summer") pic.twitter.com/XcGbR88PXV

Bezeq, a local telephone company, spoofed the presidential visit to promote its new internet security system. In the ad, pop personality Gidi Gov plays a dim-witted Israeli tourist who slips away from his White House tour and ventures into the Oval Office. There he finds, and dons, Trump’s hair, a suit and a red tie — and is mistaken for Trump. But when the real Trump shows up in a bathrobe, demanding to know what’s going on, the imposter is dragged out — pleading all the while, “Not the hair, not the hair.”

With Bezeq’s security system, "Tourist Trump" explains, none of this would have happened.

While Israeli TV pundits sonorously debated the implications of Trump’s strategy in the Middle East, “Eretz Nehederet,” Israel’s Hebrew-language version of "Saturday Night Live," aired a post-Trump-visit special the night he left. In one sketch, “Ivanka” (who in real life is a convert to Orthodox Judaism), explains that she has been teaching her father customs such as “modesty, when you shouldn’t shake a woman’s hand.” The actor playing the president says as he leers, “Don’t worry, I never grab women by the hand.”

And yet, despite the missteps, mistakes and general embarrassment, one picture, circulated broadly on mainstream and social media, captured the hearts of even the most cynical Israelis. Nechama Rivlin, the president’s wife, suffers from lung disease, and during the red carpet ceremony, stood for over an hour in the sun, holding an oxygen tank close. Later, while their husbands met formally, the two first ladies strolled together through the presidential residence, holding hands. Melania Trump’s face, as captured on camera, reveals care and concern. “I’ll walk with you, at your pace,” she seems to be saying, in one of the few truly human, unscripted moments of the two-day visit.