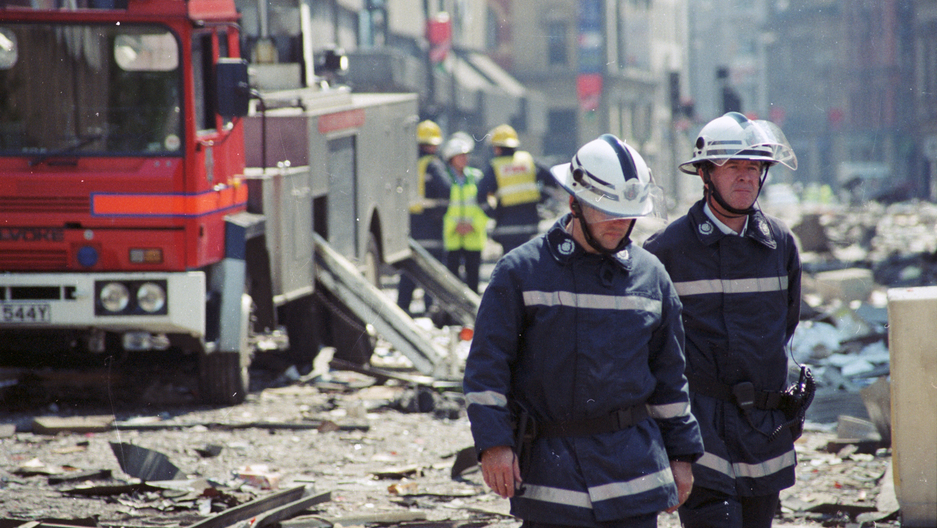 Manchester in the aftermath of the 1996 bomb blast.

Monday’s bombing at an Ariana Grande concert in Manchester was, sadly, not a new experience for the UK city.

Manchester has been the target of various bombings since the 1970s. But perhaps the most infamous occurred in June 1996, when a 3,300-pound bomb was detonated in the center of the city. The attack was carried out by the Provisional Irish Republican Army (IRA), and left about 200 people injured.

“The aftermath was really devastating for the city. It's something a lot of Mancunians remember very well and it has reshaped the city,” says Adam Taylor, a Washington Post reporter who’s written about how the 1996 attack compares with Monday’s bombing — which left at least 22 dead and 59 injured.

Although hundreds were injured and traumatized in the 1996 attack, none were killed.

"This is probably [due] to the IRA's tactic. They actually gave a warning call about an hour beforehand,” giving police a chance to evacuate about 80,000 people from the area, Taylor explains.

Although both attacks involved bombs, the motivations of those behind the bombings were very different.

“The IRA’s bombing campaign in the UK was never really driven by ideology," says Taylor. "It was driven by a key aim, which was to get ... British forces out of Northern Ireland. The ideological attacks of someone like the Islamic State — it’s very different — and it’s very much aimed at inflicting harm upon sort of the idea of the West."

Despite those differences, Taylor says he's identified similarities in the local reaction to the attacks, then and now. He says in both cases, Manchester residents came together to denounce violence and to help victims and their families. At the same time, there’s been backlash against the communities associated with the attackers (however loosely).

“The Irish community did fall under suspicion because of attacks in Manchester — not just the one in 1996, but also ones before then, going back to the 1970s,” Taylor says. “When you look back [at] the accounts of the time ... you hear things like the Irish community center in Manchester was getting hundreds of phone calls from angry people ... just criticizing. Some were threatening.”

Muslim leaders in Manchester have spoken out about various Islamophobic incidents in the city since Monday's attacks.

“One of the things I found really striking when I was reading some of the Irish diaspora papers. They were actually talking supportively of the Muslim community and saying, ‘You know what? We went through this in 1996 … Just because you are part of ethnic or religious group doesn't mean you can do the work of terrorists or political extremists,'" he says.

"Manchester is a city with ... a lot of spirit and it really was able to sort of be reborn after the 1996 attack. I can't see any reason that it wouldn't still be incredible city it is today after this recent attack."

Click the player above to hear the full interview.