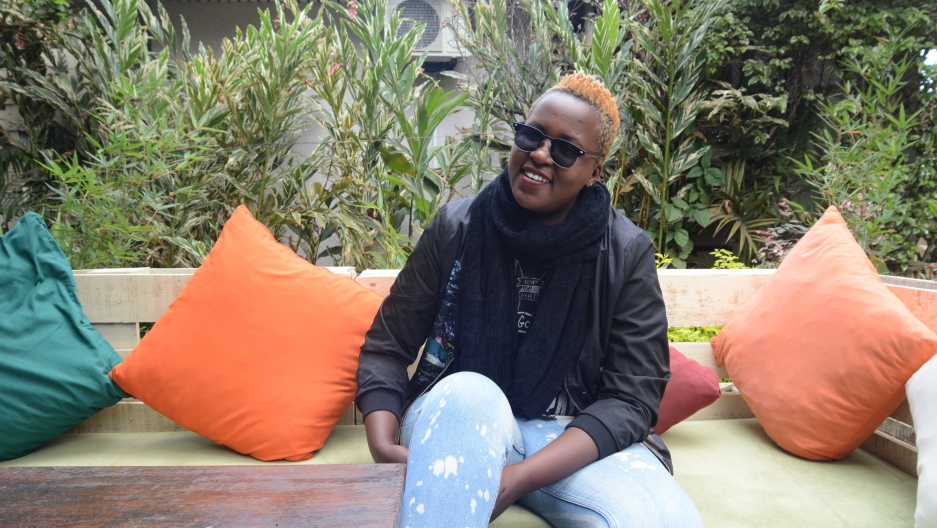 The Ugandan rapper Keko is shown here, relaxing in a cafe in Kampala.

In interviews I’d seen with her, she’s this larger-than-life personality. Boisterous and fired up. When we meet at an outdoor lounge in an upscale neighborhood in Kampala, she’s wearing cool sunglasses and has a shock of dyed blond short hair.

It’s still early on a Sunday morning, so we have the place to ourselves. After finding a spot in the corner under an umbrella, she explains that she’s getting over a cold. Her voice is low and quiet. Not what I expected from the self-described Queen of East African Rap.

But Keko is not someone who seems to waste mental energy worrying about other people’s expectations.

She’s known in Uganda for pushing back against the hypersexualized image cultivated by rappers like Nicki Minaj and Iggy Izalea. She is not one for tight clothes — she wears kicks and jeans. And her only makeup is a bit of lipstick.

The village Keko talks about is Tororo, on the eastern border of Uganda, near Kenya.

“My mother is from Tororo, and my father is from Kisumu [in Kenya], but I never met him. I pretty much used to commute between Tororo and Kampala, because my mother was working as a clearing agent for a freight company in Kampala in the 1990s. She passed away in 1994. From then, I had to move back to live with my aunties in Tororo. It was just really weird because my mom was the only parent I had. I was like, in Uganda, they say, her 'handbag' — like wherever she goes I go. And it was just weird to go from that to nothing.”

She explains that losing her mother was the most painful time in her life. And it’s when she started connecting with rap artists who were singing about pain and loss.

"Growing up, I just listened to songs, like singles most of the time. One of those singles was ‘Dear Mama’ for obvious reasons, by 2Pac. And then in high school, probably 50 Cent’s album "Get Rich or Die Trying." I listened to that — I thought this is really nice stuff and I was like, 'Maybe I can try this out.'"

She started out DJing at a local station. And then she started recording her own music.

Her first single was "Alwoo," which translates to "Cry for Help."

It tells the story of an abused woman trying to find her strength. Keko says it isn’t her story — but it’s the story of too many women she knows.

“This is what happens, pretty much in Africa. With all the misogyny and women are not supposed to stand up or speak up. There was no song like that out, touching on this subject of domestic violence.”

After "Alwoo," she had a hit with the single "Make You Dance" in 2012. It was a club and radio hit across East Africa.

The hits kept coming, and Keko was signed by a major label.

And that’s when thing got tough for her.

In 2014, Keko was at the height of her career — and she was struggling.

“I went through a phase in my life where I got really depressed after I signed the recording contract. I was having relationship issues, musical issues and I’m very passionate about my music and that’s like my refuge," she recalls. "If my music is not going how it’s supposed to, I get very anxious and restless and very depressed. I started drinking alcohol, and I started smoking weed.”

She had a very public career meltdown.

It led to her needing to take a break. She went to rehab. She got therapy. She got back on track.

And now she’s a vocal campaigner against drugs and alcohol, encouraging her fans to understand the personal and professional toll substance abuse can take.

Getting sober made it possible to record her latest album, "Strides."

At this point, we’ve been talking for about half an hour.

I feel like her voice is tired, so I turn off my recorder and put down the mic. I thank her for making time to meet. Then Keko askes me, "Do you want to talk about the LGBT thing?"

I’m a bit shocked. Throughout this interview, I have carefully skirted the issue. There have been rumors for years in the Ugandan media about her — questioning why she dresses the way she does, that she isn’t seen in public with boyfriends.

But this is Uganda.

In 2014, homosexuality was made illegal in Uganda — punishable by life in prison.

So, rumors stay just that — rumors.

But she wants to talk about it. So, I turn on my recorder and ask her why she spoke publicly about the law outlawing homosexuality back in 2014.

“I’m sure everybody in the entire country knows I’m gay,” she says.

"They are probably still [in] denial, but I’m not. I speak on it because there are so many kids out there that are like that ... people always have that notion where they say, 'Oh, [being gay] is such a Western thing, they are copying it from the movies.' So, I speak on it because people need to live freer lives. And this is Africa. So, there is still a lot of time before that happens. But if they can look back and be like, "Well, Keko was not afraid to be open about it and stand up for herself, then I can just be myself.""

I remind Keko that her interview with me will be heard by a lot of people.

I tell her if she wants me to take out the part about being gay — if she thinks it could put her in danger — she could contact me and I’d remove it.

She smiles, thanks me for the interview and says goodbye.