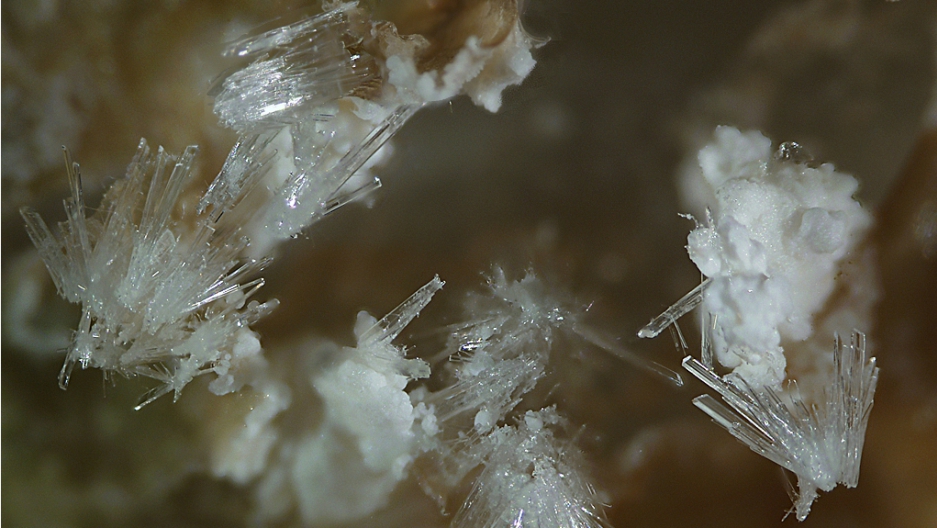 Scientists have discovered about 200 new mineral compounds, created accidentally as a result of human activity.

The new minerals were identified by research scientist Robert Hazen and a team from the Carnegie Institution for Science in Washington, DC. Their study is published in the journal American Mineralogist.

“This is the greatest ‘punctuation event’ in the evolution of minerals,” Hazen says. “If you can imagine a future geologist — a hundred million years from now, a billion years from now — coming back to Earth and studying the various strata that have been laid down, perhaps going through a Grand Canyonlike structure that cuts through the strata of our time, [they] could see this rich layer with all of these unusual crystals. These are things that are going to persist for hundreds of millions of years, so, in a sense, humans are creating their own geological time strata.”

One of the big questions occupying geologists is what epoch humanity currently lives in — whether we’ve transitioned from the Holocene era, which began some 12,000 years ago after the last ice age, into a new period known as the Anthropocene, or the Age of Man. The discovery of new chemical compounds that did not, and could not, exist before the Age of Man makes a strong case that Earth has, indeed, entered a new era, Hazen believes.

“I do think that there's a very distinctive horizon of human-made crystals, unlike anything that’s occurred before in the 4.5-billion-year history of Earth,” he says. “Now, it's up to the stratigraphers, who are the official guardians of nomenclature, to decide this, but it certainly seems to me that from a mineralogical point of view, at least, we’re in a new era of mineral evolution.”

So, how does human activity create new minerals where none existed before? Primarily by disrupting the “near-surface environment,” Hazen says.

“We dig mines. We have ore dumps. We have smelters,” he explains. “We have ships that sink and then the artifacts on those ships get exposed to seawater, and that creates new kinds of crystals. That's why there are hundreds of minerals we think are ‘human mediated.’”

Minerals form when they are “subjected to various physical, sometimes chemical, sometimes biological, processes that help to rearrange those atoms into a new crystal structure,” he continues. In order to qualify as a mineral, a substance must be crystalline, meaning its atoms are arranged in a regular, repeating pattern, and it must have a distinct chemical composition. “If you have that combination, then you have a new mineral,” Hazen says.

Some minerals are ephemeral, Hazen points out. Ice, for example, is a mineral: It is water, in a particular crystal structure; other minerals disappear every time it rains — Hazenite, for example, a mineral named after Hazen himself.

“Hazenite, I have to confess, is microbial poop,” he explains. “It occurs in only one place in the world, Mono Lake in California, and it only occurs during the dry season. Every time the lake level rises or it rains, all of the world's supply of Hazenite disappears, only to [return] when the microbes get busy making more Hazenite in the next dry season." The scientist jokes: "People tell me, ‘Hazenite happens.’”

While some may feel alarmed by the idea of human activity creating new substances on Earth after the planet did just fine on its own for billions of years, Hazen sees it differently.

“As someone who loves crystals and the diversity of crystals, it's rather marvelous to see,” he says. “At a time when we worry about biological extinction and a real decline in the variety of species of plants and animals, we're seeing this unprecedented explosion of new kinds of crystals. We're exploring nature in a way we've never been able to explore it before, and that's very exciting to me.”