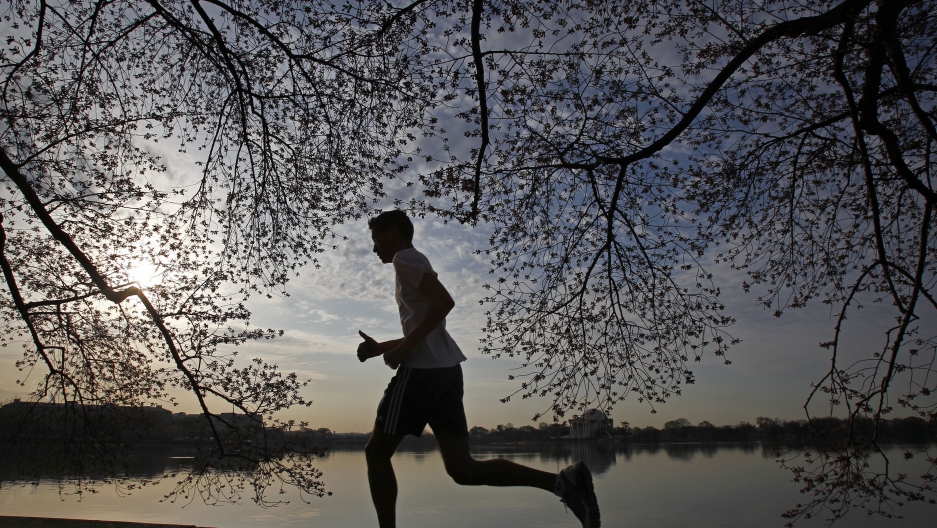 A man jogs under a canopy of cherry blossoms around the Tidal Basin in Washington in 2010.

Forget stopping to smell the roses. Biologist David George Haskell would tell you the best way to tune in to nature is by stopping to listen to trees.

“Sound is the great revealing sense,” says Haskell, who spent years observing a dozen specific trees for his new book “The Songs of Trees: Stories from Nature’s Great Connectors.”

“Sound travels over walls and through doors, and so the hidden stories of a place cannot be seen,” Haskell says. “They have to be heard.”

The biologist and writer first immersed himself in the sounds of nature when he learned to identify birds by their songs.

“Birds were my gateway drug,” Haskell says. “And then from that, I realized that trees all had their own voices, and there were lots and lots of stories behind those sounds.” 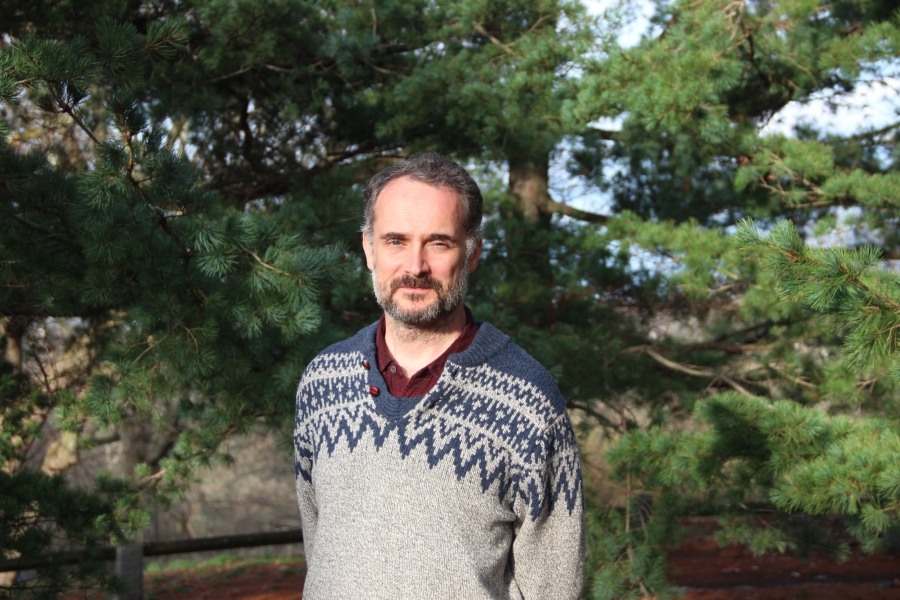 David George Haskell, author of "The Songs of Trees."

His book tells the stories of the interconnections between plants, animals and people, from the jungles of South America to the streets of New York.

Haskell was born in the UK and raised in Paris, where he remembers listening to birds as a kid. He now teaches creative nonfiction writing at the University of the South in Tennessee.

His first book, "The Forest Unseen," focused on the changes in a single square meter of Tennessee forest over the course of a year and was a finalist for the Pulitzer Prize.

Work on his second book took him much farther afield. Haskell listened to and recorded trees around the world, from an olive tree in Jerusalem to a Japanese white pine on Miyajima Island, Japan. He listened to beetles chewing the inside of a dead green ash tree in Tennessee, the sounds of paper-making in Japan, and the rumble of the New York subway recorded by a sensor inserted into the bark of a Callery pear tree in Manhattan.

Haskell says the biggest lesson he learned over years of listening is that our stories are inextricably intertwined with the stories of trees — both while they’re alive and after we make them into paper or lumber.

“Everything from every breath of air that we take … every time we read a book or step into a building,” Haskell says. “Human lives and tree lives are deeply connected.”

Listening to the "songs” of trees 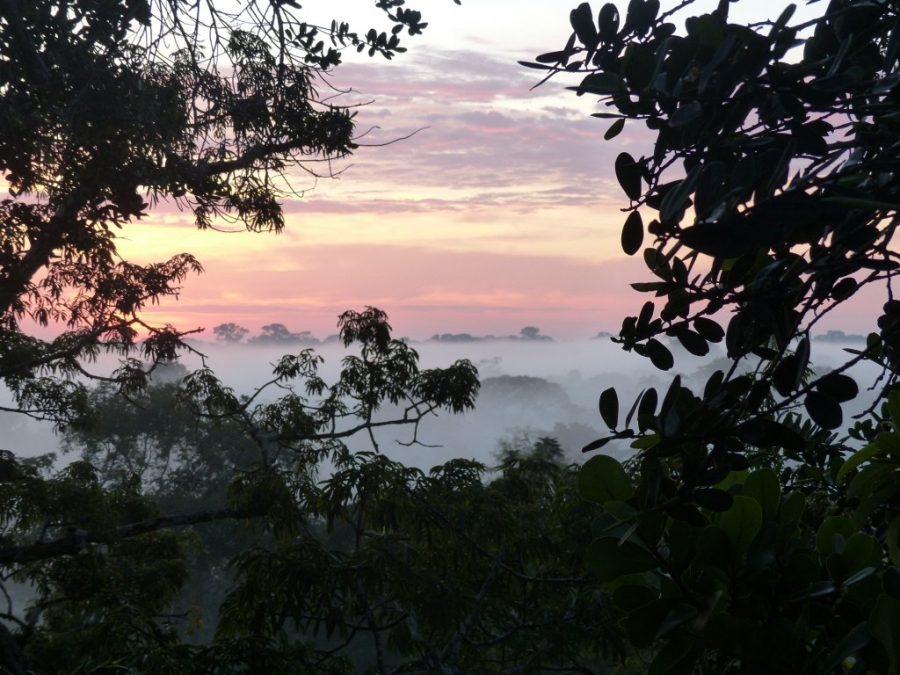 Dawn from the canopy of a ceibo tree canopy in the Ecuadorian Amazon.

Take the example of the ceibo tree, which Haskell visited in the Ecuadorean Amazon. Well over 100 feet tall, its upper branches tower over the rest of the canopy. Haskell says members of the Waoroni indigenous group use the giant ceibo to find their way — parents will tell kids that if they get lost, they should strike the tree’s giant trunks with their arms or a stick to make noise.

“The whole tree vibrates like a big subwoofer, sending out a signal: ‘I’m lost, come and help me find my way,'” Haskell says.

Haskell climbed to the top of one of those giant ceibo trees around dawn and listened to the sound of the forest as it woke up. He says howler monkeys, like people, also use these trees to communicate, climbing into the branches as day breaks to broadcast their calls to the jungle.

The monkeys waking up:
listen

“The low frequency sound are the sounds of monkeys waking up,” Haskell says. “The howler monkeys see the dawn coming and they climb to the top of the trees and release this sound.”

Underneath that same ceibo tree, Haskell recorded rain falling off the tree’s tapered leaves onto the plants on the ground below.

“And each plant has its own sound that relates to the shape and size of the leaf — how thick is it,” Haskell says. “So here, we’re hearing the big raindrops falling from high in the canopy … and we’re listening to different species. ... And in the background we hear the leaf litter, the leaf litter has a little fizzle and pop.” 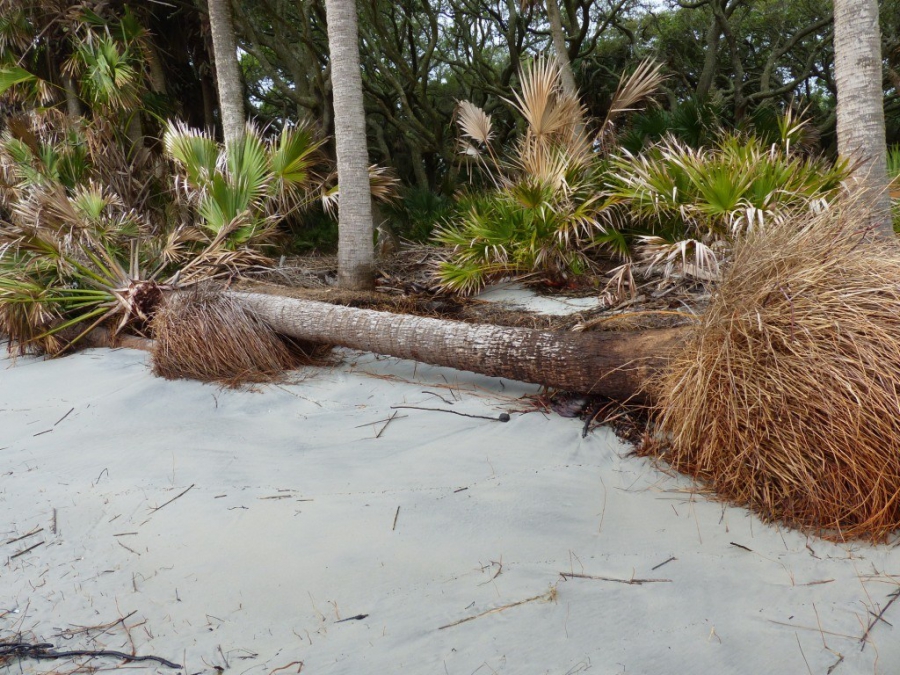 A fallen sabal palm tree on an island off the coast of Georgia.

Haskell’s book isn’t all about people and trees living together harmoniously. He also describes how the close relationships in natural systems lead, inevitably, to death.

On an island off the coast of Georgia, Haskell watched as waves crashed into the sand, slowly eroding the shoreline near a sabal palm, a species that evolved to live right near the ocean.

After Haskell recorded the waves crashing into the palm tree roots, the ocean's force knocked the tree over and killed it.

It was a power, like so many aspects of nature, revealed when someone tuned in to listen.