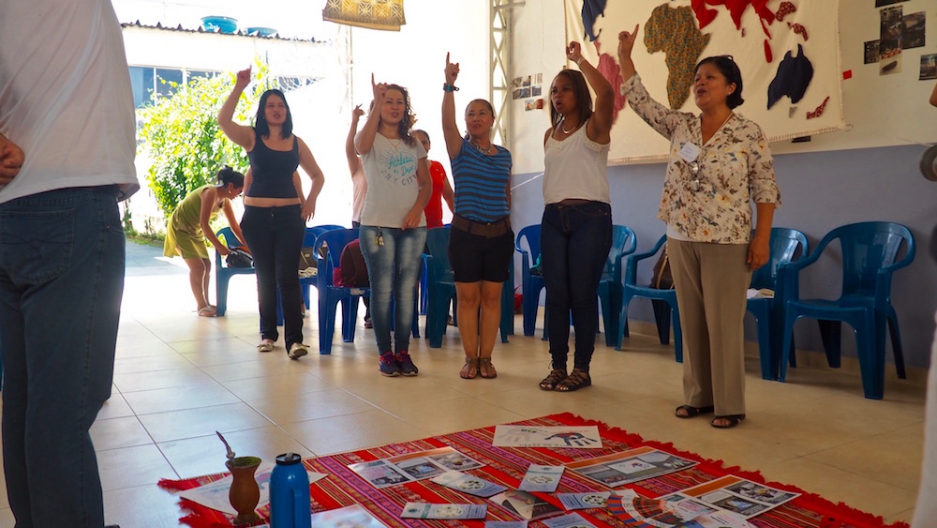 Bolivian, Colombian, Venezuelan and Peruvian immigrants participate in a team-building activity before their community organizing training at CAMI, which instructs migrants how to exit exploitative situations, be they human trafficking, forced labor or domestic violence.

Guadalupe Couto does her best work by surprise, when a source tips her off. She’s a prosecutor on a Brazilian government team that fights labor violations.

Two years ago, she got a call about the Olympics. Eleven men had been trafficked from northern Brazil to work on the Olympic park. The construction company didn’t pay them as promised and had packed them into a small, rat-infested house. Couto’s team freed the men and made sure they had tickets home. She says an event like the Olympics can bring a high risk of forced labor because there is a rush to carry out construction to meet a tight deadline. And when people take jobs quickly without researching them, they risk being trafficked.

Labor trafficking has occurred in different sectors as Brazilian cities have boomed, attracting migrants from the countryside and abroad. Brazilian authorities investigated more than 4,000 cases of labor trafficking in 2014 and 2015 — more than any other kind of human trafficking, and, according to scholars, representative of a much larger number that goes uncounted.

Carmen Lopes was living in La Paz, Bolivia, when a friend’s brother told her she could make good money in the textile industry in São Paulo.

“I wanted to make a change in my life,” says Lopes, so she packed up and traveled with her 8-year-old son to the border. Bolivians can work legally in Brazil because of South America’s trade agreement, but the Spanish-to-Portuguese language barrier makes researching options difficult.

Lopes, whose name has been changed, says “my boss bought my bus ticket, and said I needed to work for four months without pay” in a cramped workshop. He warned her other jobs in the city were unsafe and provided just one bed and one person’s worth of food for her and her son. She says she finally got the courage to escape when her boss tried to make her son work in the kitchen. Her next stop was a different workshop with worse conditions. She says it took years to get control of her life back.

“Labor protections are totally at risk in Brazil,” says Fabiana Severo, who fights labor trafficking as a federal public defender. She points out Brazil’s new president and industrial lobbies are pushing for big changes this year in labor regulations. Already, a bill awaits presidential approval that would allow companies to outsource without being responsible for abuses down the supply chain, which Severo says takes away a crucial check on forced and trafficked labor. 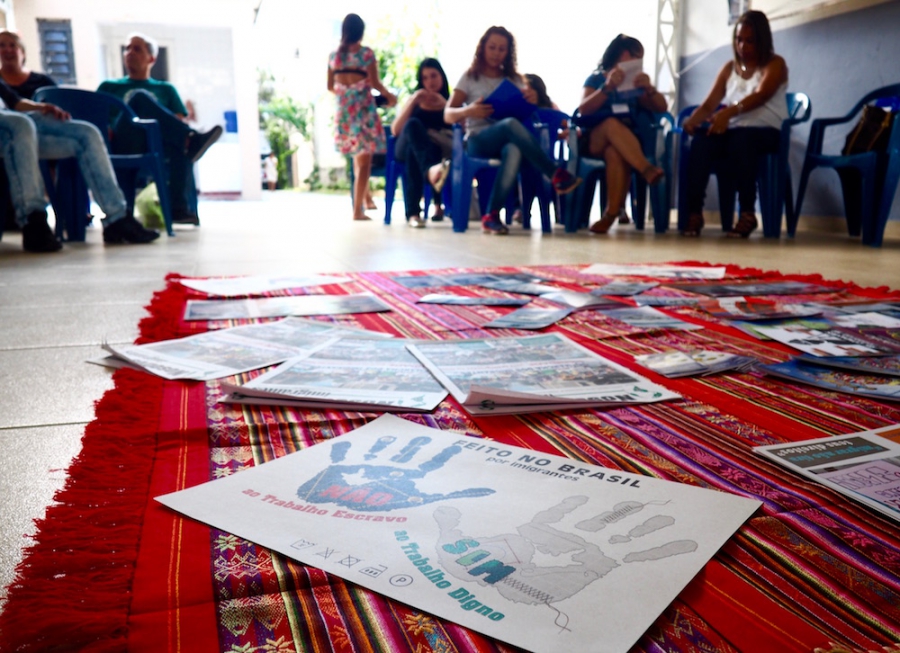 Bolivian, Colombian, Venezuelan and Peruvian immigrants participate in a team-building activity before their community organizing training at CAMI.

Another bill sitting in Congress would do away with surprise labor inspections — that’s what turned up the Olympics trafficking case. And for years, the government has stalled on hiring labor inspectors to fill the more than 1,000 positions that are currently empty. “Abuses usually happen with people who are more invisible,” says Severo. And it’s that invisibility that Lopes fights today. Trained by São Paulo’s Center for Attendance of Migrants (CAMI), an NGO that once gave her son Portuguese classes, she educates other migrants on how to avoid being exploited.

“We have rights,” she tells them. “If you’re not getting fair payment and rest time, you can leave your job. You can take courses to learn another skill.”

To avoid reproducing the problem, she says, it’s also important “to not ask others to come here” to work in the same unfair jobs. This organizing — based in communities of workers themselves — reaches places labor inspectors can’t. A similar program has been successful in India, where researchers from Harvard recently found it eliminated forced labor in one state — something legislation alone could not do. Some call this method “whisper organizing,” because of the way one worker can quietly tell another: “You don’t have to do this.”

Today, Lopes owns her own sewing shop in São Paulo.

Piles of pamphlets about trafficking and forced labor cover her front counter. Neighbors drop by for advice. Lopes gives a lot of guidance about something she’s observed is deeply connected with trafficking: domestic violence. Like poverty, it’s a push factor that leads people to move even if the new job seems risky. Carmen knows, because that’s what put her on the road to Brazil six years ago. She tells women “not [to] let other people make them feel small,” and to reach out to their networks for help if they need a safe place or to navigate calling the authorities.

At a recent training at CAMI in São Paulo, volunteers like Lopes introduced themselves by picking a word that described them.

This is our part of a deep look by Across Women's Lives at sex trafficking around the world. From India to Italy, Uganda to the UK, we'll look at the toll that being sex-trafficked takes and some of the strategies taken by women to escape. Check back from now through Friday for more of our coverage of the journey out of trafficking. Following along at PRI.org/sold.