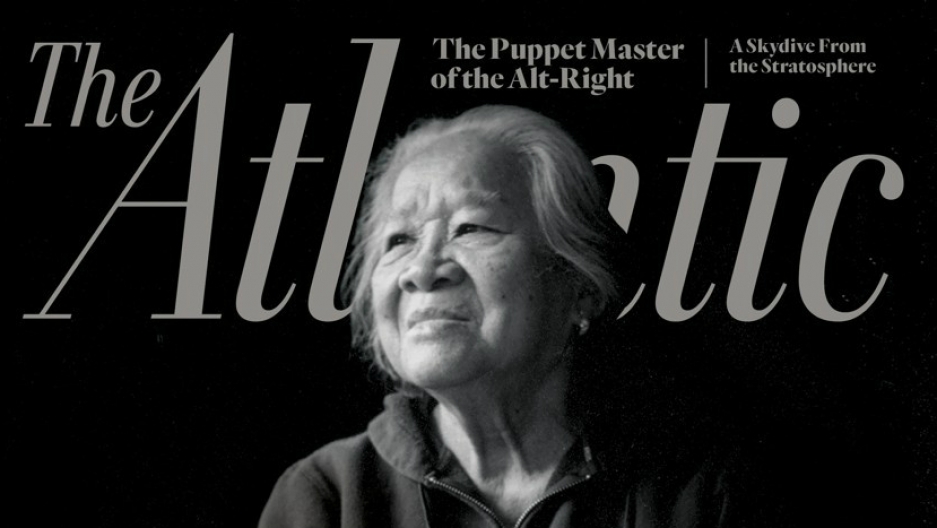 The cover of the June, 2017 issue of The Atlantic magazine.

If you had an emotional response to an essay in The Atlantic this week, you aren't alone.

The piece, written by the late Alex Tizon, tells the story of Eudocia Tomas Pulido, a woman who worked for his family and raised him. But Tizon reveals this stunning truth: For 56 years, Pulido, known to him as "Lola" — grandmother in Tagalog — was never paid for her work. She was his family's slave.

Some hailed Tizon for his writing and for telling the story in the first place. Then came the fury. In comments online, many people asked, why didn't he do more to free her, especially once he became an adult? They asked, why do we need to hear this story from Tizon, the oppressor shaping the narrative of the oppressed? Some comments said the remaining family members should be jailed or made to pay reparations to Pulido's remaining family members.

Out of the fury came defensive responses from some people in the Philippines. On Twitter and Facebook, readers began to discuss the Philippines' colonial past — which includes more than 300 years of rule under the Spanish and then almost 50 years under the US — and how it continues to shape power structures. Some Filipinos and Filipino Americans say it's important to consider poverty as a driving force of the enslavement of people like Pulido.

It's important to ask, "How does this happen?" And some say it's time to move forward and make sure this never happens again.

Read: "My Family's Slave" by Alex Tizon for The Atlantic

1. There's nothing defensible about slavery. But should Tizon's essay be celebrated?

What happened to Pulido was indefensible — on that point, everyone seems to agree. But some readers are questioning Tizon's motives in writing her story. Was he trying to absolve himself? Why did Pulido's story have to come from him, the child of the oppressors?

Tizon died suddenly before the publication of the piece, so we'll never know the true answers to some of these questions. We only have his original story to reflect on.

The Seattle Times ran an obituary — largely informed by Tizon himself — about Pulido, who died in 2011 at age 86. In it, she is portrayed as a loving and loved member of the Tizon family. Reading the obituary is difficult, especially now that we know all of the facts. We'll never be able to ask Tizon about the disconnect.

The paper issued a retraction this week, calling the obituary a "whitewash for a fundamental truth known only to Tizon and his family: Ms. Pulido was a slave."

Tizon won a Pulitzer Prize in 1997 while he was a reporter at the Times.

His wife, Melissa Tizon, spoke with KUOW in Seattle about the essay and the reaction. It's worth a listen and could provide some insight into the Tizons' frame of mind.

2. There are historical and cultural forces at play that made it seem, at least to the elder Tizons, that what they were doing to Pulido was somehow acceptable.

Pulido became a slave in the Philippines after World War II, before she was brought to the US with the Tizon family. Filipinos in the Philippines say it's important to know the history and culture of the country in order to understand how a situation like this can happen.

The Philippines is a country that has a long history of colonialism, hundreds of years of oppression by the Spanish and then several decades by the US. The power dynamics and economy of the country is dictated by this colonial past. That past created a system where there are a few very powerful and rich people at the top and a lot of people in poverty at the bottom.

Also: Here's the backstory on why the US has such close ties to the Philippines

So, it is common for people to have domestic workers in their homes. This includes nannies, housekeepers and people who do your laundry. Even people who are in the working and middle class hire domestic helpers — you don't have to be very wealthy. These workers are part of the landscape, part of the economy.

In that situation, some families might feel like they're actually doing their domestic workers a favor. Not paying a living wage or only paying them with room and board is enough because, well, it's better than nothing. Without other options, domestic workers might internalize some of this thinking and feel indebted to their employer. And because this all happens within the privacy of homes, it's difficult to ensure that domestic workers are being treated fairly.

The dynamic creates a situation rife for abuse.

For more on how this system came to be, read historian Vicente Rafael's breakdown of the history and culture of the Philippines. Mike Ricca, a photographer from Manila, offers another take in the Philippines edition of Esquire. In it, he describes the "societal and cultural shackles" that Pulido had to contend with.

3. Cultural forces might have made it hard for Alex Tizon to speak out against his parents.

Filipino culture generally includes a very strong sense of duty to family. It's something that children often feel intensely, which prevents them from speaking out against their parents — even when they become adults. In America, Tizon learned about the history of slavery and African Americans. He relates one big fight with his mother in which he used the word "slave" to describe Pulido's situation. But ultimately, he did not do more to free Pulido until after his mother's death, when he was 40 years old — and she was 75.

Writer Jay Caspian Kang explains this in terms that many children of immigrants might find familiar: "It's a stunningly honest piece about something second-generation immigrants rarely address — the old world sins of their parents and the frustration, indignation and distance we feel whenever we encounter the trenchant, ugly things our parents brought with them."

4. Filipinos and Filipino Americans are grappling with the story, but are also willing to confront the problem.

The comment section of a story in Scout, a magazine about Filipino youth culture, is worth exploring.

Rappler, a popular Philippines news website, published several reaction pieces. Lian Buan explains the debate this way: "Whether he's Asian, or white, or black, [Tizon] was complicit to slavery, and that in itself is wrong, no matter the race. I struggled to write this because it feels like betraying my own: Tizon is a Filipino, a journalist and an immigrant. I should be empathetic. But I'm choosing to take a hard look at the mirror and recognize that this is my problem too, that this is our problem too."

5. There are many other Lola Eudocia Tomas Pulidos out there.

For many Filipinos and Filipino Americans, the question isn't about what the Tizons and The Atlantic should have done, but it's about what comes next. Activists point out that Pulido's story, while exceptional, is one of many. BAYAN USA, a group of progressive Filipino organizations in the United States, says thousands of migrant workers leave the Philippines each day, many to work in richer countries. Many of the workers are exploited with "no compensation, low wages, unstable working conditions, contractualization, physical and sexual abuse, wage theft and exploitation."

Rappler's Shakira Sison wrote a piece worth reading called, "We Are All Tizons." She encourages Filipinos, in the Philippines and the US, to go beyond anger and reflect on the power structures behind slavery. And she provides an action plan to dismantle them.

Step one is a lesson we might all relate to: "Stop treating your helpers' employment as a favor to them."