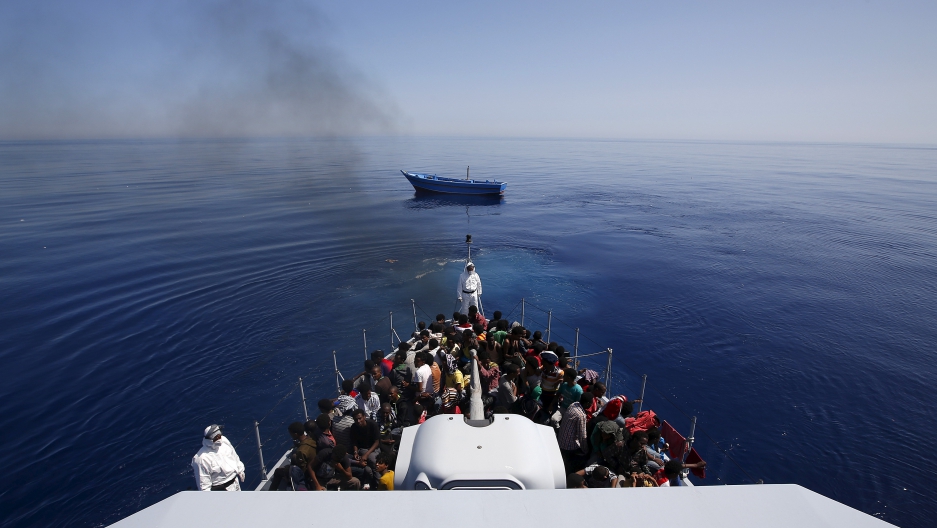 A group of 300 sub-Saharan Africans sit on board an Italian police vessel as their boat is left adrift off the coast of Sicily, May 14, 2015.

Walking out of church one sunny Sicilian Sunday, Fortune puckers her lips, looks coyly into the camera and snaps a selfie.

Like millennials everywhere, Fortune loves social media — and she’s not done packaging her morning. She asks her friend to take a few quick pics, striking different poses — from the front, the side, the back. She’s looking sharp in her matching skirt and suit jacket, red lipstick, and a sleek new blonde wig tied in a knot at the back of her head.

She publishes the photo on Facebook, and likes the comments coming in from friends back in Nigeria. “Very fine,” types one friend.

Facebook is famously the place where people present glossed over portraits of their lives, but rarely does the image stand so starkly different from the reality of Fortune’s days.

After an arduous sea voyage, Fortune landed in Sicily and was put in an overfilled camp for migrants. She escaped, and was quickly pressed into sex work, standing by the side of the road, selling her body to strangers, who sometimes are violent.

She’s one of an increasing number of Nigerian women being trafficked into Europe, finding themselves stuck in Sicily. From 2015 to 2016, the estimated number of Nigerian women arriving increased from 5,600 to more than 11,000. The media images seen in the West show these migrants as desperate human beings, clinging to a raft, saddled with shivering babies or pressed against barbed wire.

But that’s not how the Nigerian women are showing themselves to friends and family back home.

According to Fortune’s Facebook profile, she is living in Europe — grateful, happy, and devout. Her Facebook page is filled with images of her and her friends, short prayers, or aphoristic bits of pop-wisdom.

Facebook pages of trafficked women like Fortune, who asked to be identified by a pseudonym because of her circumstances, offer insight into why the number of Nigerian women coming to Europe is increasing, despite the dangerous and unglamorous journey.

“Most of them lie,” concludes Peace, another Nigerian woman living in Palermo who asked the be identified by a pseudonym.

Peace, who is now 21, has lived in Italy for four years. She arrived as a 17-year-old. Trafficked to Europe, she was told to escape the refugee camp where she was placed after arriving in Italy. She was forced to work on the street in Sicily until she decided she’d had enough and did something that is almost impossible — she left.

Peace speaks freely and with self-awareness, marks of her newfound freedom. To her, the Facebook posts of her Nigerian and African friends who live in Europe make it look like they are “enjoying” Europe, when often the exact opposite is true.

To explain it, she says, “It’s just like, when someone asks you, ‘what job do you do?’ You cannot tell the person, ‘hey, I am in prostitution.’ You always want to look nice, so that your friends back there think, ‘oh my gosh, my friend is really, really enjoying.’”

It’s not just the women. Step into any of the camps for young asylum-seekers here in Sicily and you will find, amid the squalor of dorms and refectories, you'll find men and women, eyes or ears glued to a telephone — a telephone they have used their precious resources to buy, or have borrowed from a friend.

Aisha, a young, energetic Gambian woman stuck in a camp in a remote town in western Sicily, explained that some of the Facebook posturing is because of pride. Once you’ve made the journey to Europe, you feel that you need to uphold the ideal of what life in Europe looks like. Admitting that you aren’t doing well might be seen more as a reflection of you, personally, than of society and the opportunities available in Europe.

“The pictures make people want to come to Europe,” Peace suggests "They don’t know that, hey, it’s a living hell.” She laughs to ease the pain.

Peace, Aisha, and other young men and women in the camps or working on the street in forced sex work, often talk about the pain of their lives, the shame of working on the street, and the tedious depression of waiting for months on end in an immigration shelter, while waiting to hear whether an asylum request was granted.

A young man I met during a visit to one camp said he talks with his neighbors about the only thing they have in common — Libya, where he came from. Young men and women I met in these camps talk openly about having been repeatedly raped on their journeys, about living in Libyan camps and surviving off a piece of bread and a cup of water a day. They talk about camps so crowded that you had to sit with your knees to your chin for weeks on end. They talk about seeing people shot, or drowning in the Mediterranean.

But all of this is absent from their Facebook pages.

Aisha and Peace agree that publicizing their traumas and problems to their friends back home would be useless. “They won’t believe you,” Aisha explained, saying they might think you were lying, in order to keep all the goods of Europe to yourself.

Perhaps, concludes Peace, “the best thing is just to allow them to come, to understand. When they come they will experience what you are experiencing, and they will know that it’s not easy."

This is our part of a deep look by Across Women's Lives at sex trafficking around the world. From India to Italy, Uganda to the UK, we'll look at the toll that being sex-trafficked takes and some of the strategies taken by women to escape. Check back from now through Friday for more of our coverage of the journey out of trafficking. Following along at PRI.org/sold.

Maggie Neil is a writer and researcher based in Italy, focusing on trafficking and migration thanks to a Fulbright research grant. She reported this story with the assistance of The Fuller Project for International Reporting.