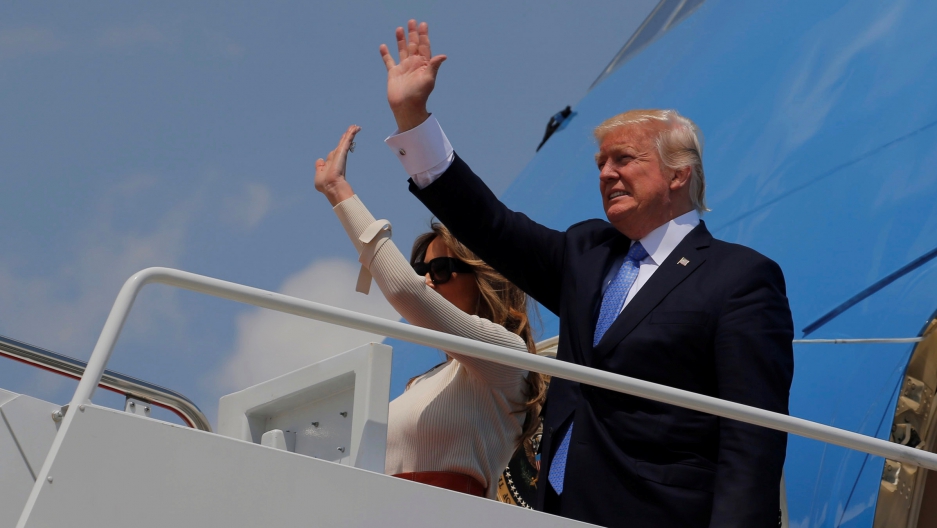 U.S. President Donald Trump and first lady Melania Trump board Air Force One for his first international trip as president, including stops in Saudi Arabia, Israel, the Vatican, Brussels and at the G7 summit in Sicily, from Joint Base Andrews, Maryland, U.S. May 19, 2017.

For the first stop of his first foreign trip as president, Donald Trump will land in Riyadh, the capital of Saudi Arabia, where he will seal a weapons deal, meet with some business executives, and give a speech to a room full of Muslim leaders about Islam.

The White House said Trump would use the planned speech to offer his “hopes for a peaceful vision of Islam.”

When Roula Allouch, chair of the national board of the Council on American-Islamic Relations, heard that announcement, she says she rolled her eyes.

But then she thought a little more about the implications of Trump’s trip and realized there could be an upside.

“One thing that we can say about the president is that he’s been unpredictable,” Allouch says.

“I’m hoping that as we lead up to the speech that he will take the opportunity to use it as a time to unify people, as a time to condemn the anti-Muslim incidents that have been happening, particularly here in the United States since the presidential campaign and since his administration took office,” she says.

Allouch says she hopes that Trump will “clarify his thought on Islam as one of the world’s great religions.”

Given Trump’s track record, Allouch says she is keeping her expectations low.

On the campaign trail, Trump called for a ban on Muslims entering the US. He hired advisers with fringe views of Islam as a threat to American security and democracy. In an interview with CNN, Trump said that “Islam hates us.”

Nonetheless, a senior Saudi cleric on Friday described this weekend’s summit between Trump and Muslim leaders as “blessed."

Sheikh Saleh bin Hamid, the imam in the holy city of Mecca, said the gathering planned for Sunday is a “blessed meeting that will bring together brothers and friends,” according to Agence France-Presse.

After his visit to Saudi Arabia, Trump will spend some time in Israel and then fly to Rome, where he will visit the Vatican. The thinking behind the president’s itinerary is quite coherent, says Aaron David Miller of the Wilson Center in Washington, DC. Miller also advised several US presidents, from both parties, on the Middle East peace process.

“In Trump-land, all roads begin, at least, with an effort to differentiate yourself from your predecessor,” Miller says.

“I’m sure that whoever devised the notion of this world religion tour took a look at the fact that Mr. Obama in June ’09 went to Saudi and then on to Cairo,” he adds.

Obama’s speech in the Egyptian capital was billed as a new beginning, and “groundbreaking, transformative,” for US policy in the Middle East and toward the Muslim world, Miller says.

Miller reckons that the Trump White House is aiming to do something much bigger, and better, than Obama by touching base with centers for three major religions on this single trip.

The symbolism, according to Miller, is all about bridge-building.

“The problem, of course, is that once you plunge into the world of the three Abrahamic faiths, what you soon begin to understand is whatever they share in common, which is a lot actually, there are major differences,” Miller adds.

“It’s hard to look at religion when it comes to conflict resolution as a device that doesn’t get you into trouble,” he says.

“And Jerusalem of course is the mother of all problems when it comes to sorting this out.”

In Jerusalem, Trump plans to visit the Western Wall in the Old City. This is one of the holiest spots on Earth for Jews, and it sits right next to the Al-Aqsa Mosque compound, which is revered by Muslims worldwide. Trump would be the first sitting US president to visit this location.

Given everything at stake, and all the potential pitfalls, Miller suggests that Trump simply try to get through this trip by offending the fewest people possible.

The easiest part of the tour for Trump will probably be at the Vatican, where the president will meet with Pope Francis, one of the most popular leaders on the world stage.

It is an open secret, however, that these are two men with very different personalities, says Thomas Reese, a Jesuit priest and a senior analyst for the National Catholic Reporter.

“Pope Francis is a humble man who lives … a poor lifestyle, identifies with the poor, reaches out to the poor,” Reese says.

“President Trump has got this huge ego. And his policies, you know, are not really all that much concerned about the poor. He’s pushing tax cuts for the rich.”

There are other policy disagreements between Trump and Francis, Reese points out. These include the treatment of immigrants and refugees, the wall Trump has planned for the US border with Mexico, and the global effects of climate change.

Still, the pope has indicated that he will not use a public meeting with Trump to challenge or embarrass the president. That is not how the Vatican conducts public diplomacy. Any substance to come out of the meeting between Trump and Francis is likely be hashed out behind closed doors.

After stops in Italy and Belgium for meetings with the G-7 and NATO, President Trump is expected to end his religion-infused tour and return to the unforgiving reality of Washington politics.