A demonstrator confronts riot police during a protest against Brazil's President Michel Temer in front of the Planalto Palace in Brasília, Brazil, on May 18.

President Michel Temer was allegedly caught in recordings authorizing payments to a jailed politician to stay quiet in the corruption probe known as “Car Wash” ( “Lava Jato”), according to O Globo newspaper. He also reportedly praised the buy-offs of two judges, to thwart a separate investigation.

On Thursday, a Brazilian Supreme Court judge opened a case against Temer for obstruction of justice. Politicians have already filed two impeachment charges against him.

Many Brazilians say they want Temer out — not even a year after he rose to power with the impeachment of his predecessor. But Temer denies any wrongdoing and refuses to resign.

Brazil's President Michel Temer speaks at the Planalto Palace in Brasília, Brazil, May 18.

Uncertainty over Brazil’s future caused its stock index to have its worst day since 2008 on Thursday, dropping more than 8 percent.

The accusations facing Temer are based on secret recordings by Joesley Batista, a billionaire director of meat company JBS. They came courtesy of Batista’s plea bargain deal to reduce his own sentence in Car Wash. Reuters reported that several inside sources corroborate the story.

Government investigators released text and videos of the plea testimony on Friday. They include claims that Temer asked for over a million dollars in bribes between 2010 and 2017.

Temer’s office acknowledged meeting with Batista, according to Reuters, but denied the allegations in his testimony.

Batista’s plea bargain implicated so many across the political spectrum that Brazilian police carried out more than 30 search warrants on Thursday morning.

Senator and ex-presidential candidate Aécio Neves was stripped of office after being taped discussing a plan to move bribe money through someone “who we will kill before he plea bargains.” Neves’s lawyer said late Thursday that he only talked about killing someone as a joke.

If so, many Brazilians would not be amused. The country is still rattled by mysterious plane crashes — one in January that killed a top anti-corruption judge, and another in 2014 that killed a Neves political opponent.

“We’re in an absurd situation,” said international relations student Nathana Garcez, 23, as she traveled through downtown Rio de Janeiro to join a protest against Temer on Thursday evening. Demonstrations broke out in major cities across the country. “There is no way to stay in power for a government in which the president speaks openly about bribes, a key ally discusses killing people, and other allies get leaked information about the central bank,” she continued, referring to reports that Temer privately gave the meat company executive predictions about upcoming interest-rate cuts.

Temer, the former vice president of impeached President Dilma Rousseff, was already deeply unpopular among voters before the latest batch of allegations. Now, market and political analysts are speculating that he may not finish his term, which is supposed to end in January 2019. There are at least four ways he could go.

Across the country, protesters Thursday night called for diretas já — "new elections." They recalled cries from the street last March when Temer and Rousseff went under investigation for breaking campaign law; the investigation is still open against them both.

Demonstrators attend a protest against Brazil's President Michel Temer in Rio de Janeiro, Brazil, May 18. The signs read: "Elections Now!" and "No right to less."

Although Temer was also described overseeing a $40 million bribe in an April plea testimony, he has repeatedly denied involvement in any wrongdoing related to the Car Wash probe. Last July, he told Folha de São Paulo reporters there was “zero chance” his name would come up in investigations.

He has struggled to win over the public during his unelected mandate, as he's pushed for dramatic pro-market reforms to Brazil’s economy, cut labor protections and health and education spending, while boosting the salaries of highly paid public officials, such as judges.

“Beyond his own involvement in corruption, it’s those unfair changes that hurt us the most,” said 30-year-old consultant Renilton Santos, who came from his low-income neighborhood on the outskirts of Rio to the Thursday night protest in the city’s downtown.

Santos stood on the stone steps that sweep around Rio’s neoclassical city hall, watching as an estimated 5,000 demonstrators, many with handwritten signs, spilled into Cinelândia plaza. 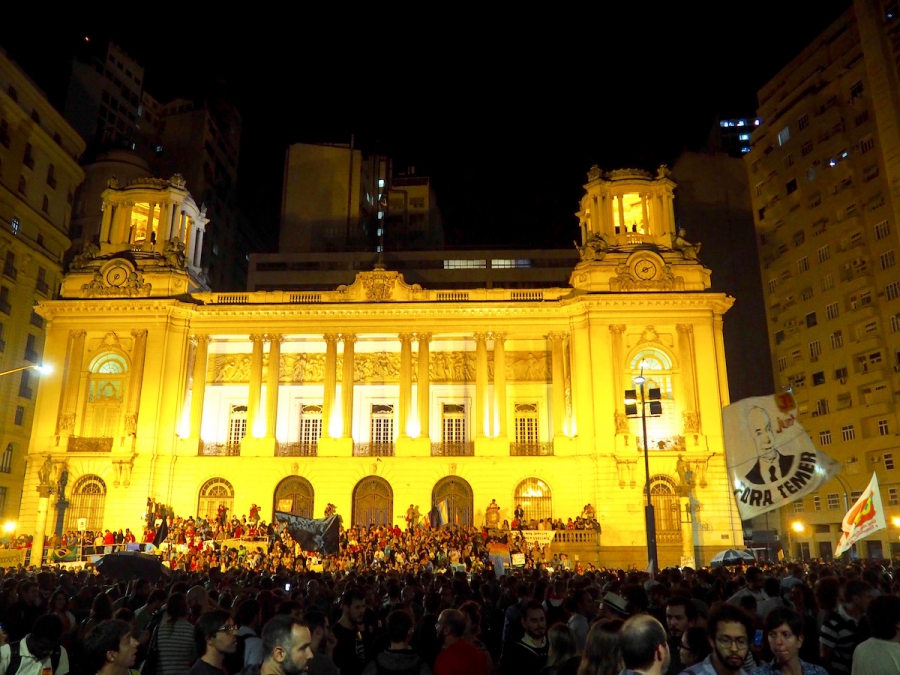 This shows anti-Temer protests in Rio de Janeiro on May 18.

“The people deserve the chance to choose their president, rather than indirect elections for a new president that comes from this Congress,” said Santos, noting over 70 lawmakers are under investigation for corruption.

Police eventually sprayed tear gas at the crowd. Santos began to run alongside two protesters carrying a coffin they designed (according to a sign affixed to the lid), to help "bury" labor reforms that weaken worker protections.

Federal University of Rio de Janeiro political scientist Maria Abreu noted, “The new recordings are just one more piece of evidence that Brazil’s judiciary is compromised, so it’s not sufficient for people to sit back and think that the courts working with the federal police will resolve the country’s problems.”

She also sees parallels to the pace and gravity of revelations about US President Donald Trump’s administration. “As exhausting as it is, the people themselves need to be watchdogs of what is going on and apply pressure when they see institutions failing. Businessmen and politicians offering falsely easy solutions to complex problems are happy to take advantage of this moment.”

Batista’s meat company, JBS, reportedly made a small fortune in the past 24 hours after having bought US dollars before Batista’s bombshell plea bargain went public.

“Things are moving quickly in Brazil,” said Garcez, the student, “and the next few days will have big consequences for our country’s institutions going forward.”