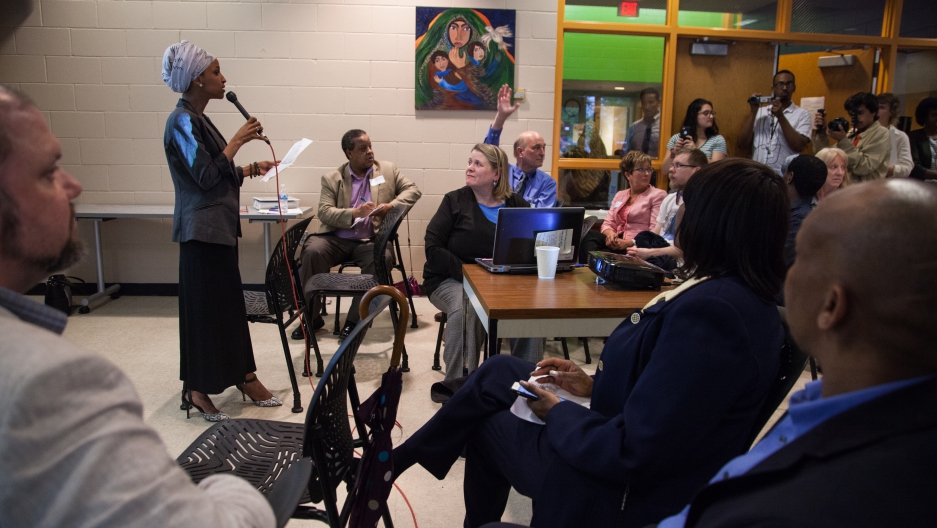 Minnesota State Rep. Ilhan Omar addresses a crowd of more than 30 people gathered during a meeting she called to address measles and vaccination at the Brian Coyle Community Center in the Cedar-Riverside neighborhood of Minneapolis on Wednesday, May 17, 2017.

The Riverside Plaza high-rise apartments, the iconic symbol of the Somali community in Minneapolis, are a short walk from the People’s Center Health Services, where most of the patients are of Somali descent. A parent with sick children, or an elder who needs diabetes care, does not have to travel far to see a doctor.

Generally speaking, Somalis in the Twin Cities of Minneapolis and St. Paul are not facing a lack of access to health care providers. At least, not in terms of distance.

At a community meeting on Wednesday night in the neighborhood, the actual issues of access to health care were on display.

Minnesota State Rep. Ilhan Omar and public health officials spent an hour and a half talking about measles and vaccinations with about 30 people at the Brian Coyle Community Center.

After a presentation on why children should be vaccinated, the floor was given to audience members for questions and comments.

The presentation comes amidst a rare measles outbreak that started in the suburbs of Minneapolis and has so far affected 63 children and three adults, the majority of whom are Somali, according to the Minnesota Department of Health.

The immediate cause of the outbreak has been linked to a precipitous drop in MMR vaccinations in Minneapolis. More than 90 percent of Somali children were vaccinated before 2008; that rate has dropped to about 40 percent according to state health officials. The change is fueled by fears of autism. A report released by the University of Minnesota in 2013 confirmed that autism shows up in higher rates among Somali children (one in 32) than other minority groups in Minneapolis, though roughly on par with whites (one in 36). Some parents, concerned for their children, have come to believe the discredited theory that MMR vaccines are the culprit.

The outbreak and the controversy grabbed national headlines.

Kamal Hassan said he contracted measles as a child and knew firsthand the importance of vaccinations, which he made sure his own children received. In his native Somalia, people did not question the safety of vaccines, he said. The doubts only began when Somalis moved to the US.

“The system failed our community,” he said, by not being more proactive to “compete with bad information” from anti-vaccination groups, as well as provide public health outreach in general. 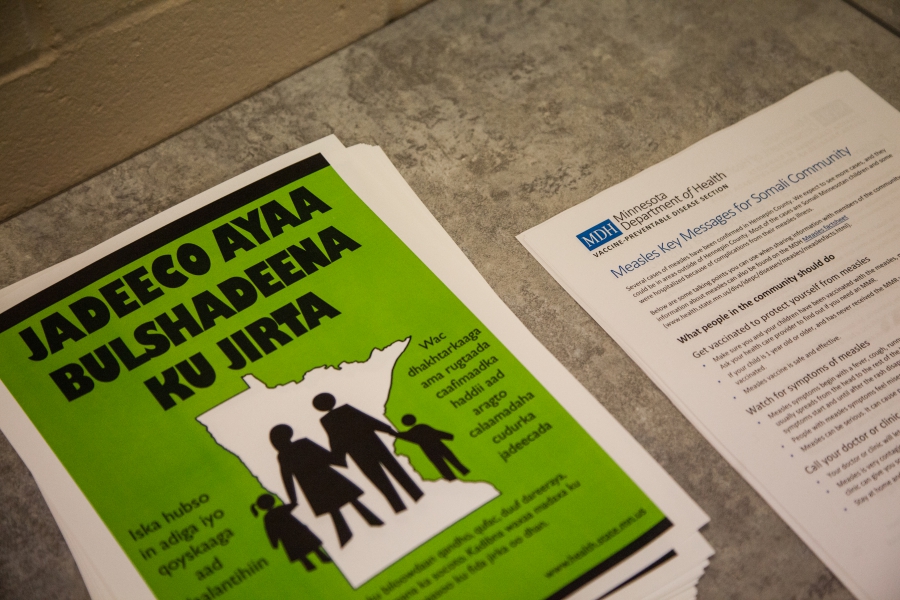 Somali and English-language printouts with information on measles and vaccination on a table at Brian Coyle Community Center, where Ilhan Omar held a community event on May 17, 2017 with Hennepin County public health officials.

Anti-vaccination advocates were there Wednesday night too, continuing to challenge health officials’ message. Jan Frederick of the Vaccine Safety Council of Minnesota handed out printouts that claimed: “some children suffer permanent brain damage from the vaccine, and some die from it.” As the event closed, a young woman in the audience accused Omar, the first Somali American legislator in the US, of “supporting white supremacy” because she would not field any more questions or comments.

More: What Sweden can teach America about measles vaccinations

But long before this outbreak thrust Somali public health into the spotlight, community activists like Abdirizak Bihi have said that there are reasons that health issues — like measles — disproportionately affect his community. He worked for Hennepin County’s Office of Multicultural Services for three years from 1999 to 2002. The problem, he says, is a lack of education about how to engage the health care system on the patient side, and a lack of cultural awareness on the provider side. It’s a gap in understanding, Bihi says, that public health officials used to fill fairly well on a local level — but no longer do. 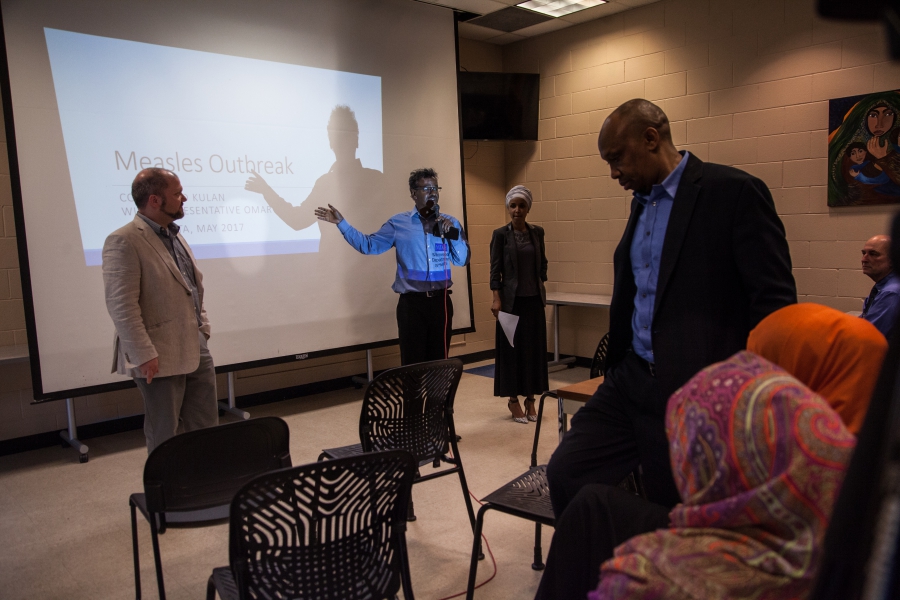 Abdirizak Bihi translates for Ilhan Omar at her event in Brian Coyle Community Center in Minneapolis on May 17, 2017.

Just a few years ago, Bihi estimates, it was common to see county health workers at community events and in the lobbies of high rises. “The county was visible,” he says, even at Friday prayers in the local mosques. But this hasn’t been happening in recent years, and their absence has helped anti-vaccination advocates to spread their false message.

Jillian M. Kyles, program manager at Hennepin County’s Office of Multicultural Services, does not share Bihi’s assessment. “I have not seen that diminish," she says.

Kyles, who was once Bihi’s supervisor, says her staff are present at the community center several nights a week.

“We spend from April to probably November almost every weekend and many weeknights at community resource fairs, with resource tables. ... Our office is a walk-in office that's very well-known in the community,” she says.

But grants for specific projects sometimes do dry up and those projects disappear. As the Somali population grows, she says, these projects are not sustainable solutions.

“What we have found is that the Somali community tends to pop up in just about every category in terms of having a level of disparity ... meaning that they’re not being served as well as others,” she says.

The problem is not just in the Somali community. Laura Hanen of the National Association of County and City Health Officials told NBC News that staffing is a problem. "We have seen our public health workforce decline since the 2008 recession," she says.

And while measles and autism are in the news, they are not the only public health issues that deserve attention. Bihi says that diabetes is another major concern among Somali Minnesotans, who number about 30,000 and often left conflicts and refugee camps to live in the state.

Health care providers have tried to fill the gap with programs for doctors. Allina conducted a series of presentations that focused on cultural awareness for Somali patients. At Fairview Health Services, Dr. Aner Vlodaver, a pediatrician who regularly sees Somali patients, helped develop an intensive cultural competency training for staff at two clinics. There were six sessions at each clinic over six months starting in February 2015, including basic Somali language instruction.

Language, he says, has made a big difference. Vlodaver says one patient drove all the way from Rochester, Minnesota, nearly 90 miles away, just to see him because he is now known as “the doctor who can speak Somali.” 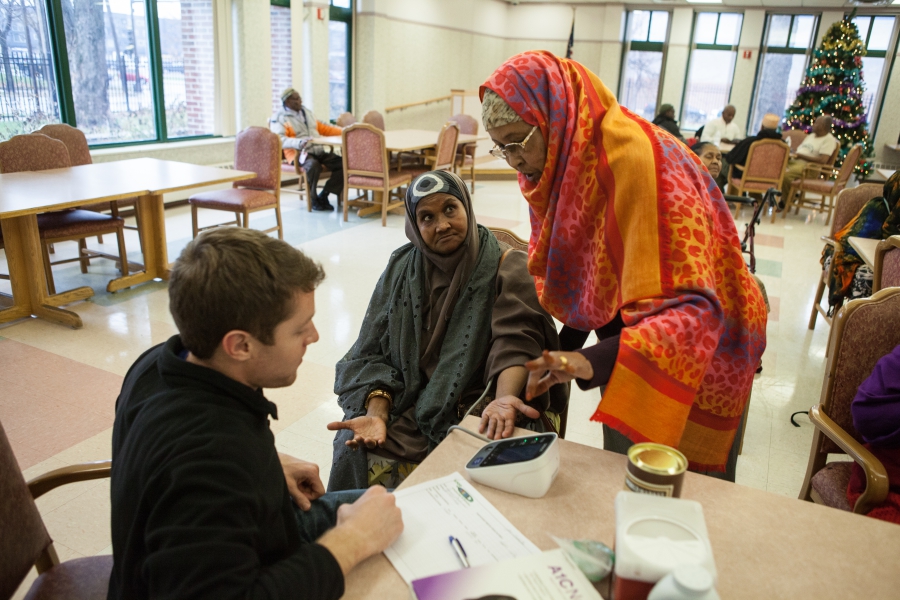 Sahra Ali, right, checks the blood pressure of an elderly Somali woman at a high-rise in South Minneapolis on December 8, 2015. It was part of a health outreach program that ended in early 2017.

Allina has also helped fund some groups to do outreach, such as A Partnership of Diabetics, a “peer-to-peer diabetes education and support program.” Until the partnership was disbanded this year, every week Somali elders would gather in the community rooms of high-rise apartments, sipping tea and coffee while waiting for volunteers to check their weight and blood sugar. Bilingual staff were present to make sure the patients understood the medical advice of the attending doctors and nurses. They also held monthly support group meetings.

But such efforts might not be enough in the face of an outbreak. Minnesota Health Commissioner Ed Ehlinger has asked the state for $5 million in emergency funding to deal with the measles cases and other infectious diseases.

A week ago, the Hennepin County Health Department reached out to Allina to work together. Allina’s Somali-speaking staff will spread the county’s pro-vaccination message on Somali-language radio stations and media outlets.

“That’s exactly the kind of relationship we want to be having with public health,” says Pence. She says there has been a sharp increase in MMR vaccination rates since the outbreak, which in her mind shows that “public messaging is actually quite effective."

As for Bihi, who was a translator at Wednesday’s session, these efforts are certainly a step in the right direction. But he’s hoping they will extend beyond the immediate needs of this situation.

“It’s not about outbreak, it’s about beyond that,” he says. “I would love to see in the next five years, that this conversation continues.”

Next: How two Minnesotans turned their online popularity into big money for famine aid