Sexual slavery in the 21st century looks like this: Millions of women and girls — lives interrupted by civil war, climate change or economic desperation — are forced to sell their bodies to survive. Some are held captive by gangs and forced to earn back their “debts”; others are tricked by promises of a better life. It's a growing, multi-billion dollar  industry that exists in the Maryland suburbs, the ports of Sicily and the jungles of Uganda

But most trafficked women don't stay in slavery forever. They get out. And as Across Women's Lives talked to women impacted by trafficking, we recognized a big story that the media ignores: the brave journey out of slavery that women around the world make every day.

At AWL, our reporting is by women and for women, so you won't get the fallen angels narrative, or the woman-as-victim. If you were trafficked, how would you get out and get back up?  These are the stories of tough, enterprising mothers, daughters and girlfriends from around the world, surviving and succeeding no matter how hard their circumstances.

So check out our latest Across Women’s Lives series — all about life after being trafficked — which starts May 18 and spans several countries.

In Uganda, AWL reporter Jasmine Garsd and producer Andrea Crossan meet with women trafficked by the Lord's Resistance Army who must reconcile with their oppressors to get on with their lives; In Brazil, women trafficked during the Olympics push for reforms; In India, one teenager escapes from a family that tried to sell her into slavery. In suburban New Jersey, an 84 year old woman breaks her silence to finally own her story of being trafficked 70 years ago. And in London, a young woman makes it from Nigeria, escapes her traffickers, and launches her new  life.

Most Nigerians never make it to London. Out of a port in Sicily, we have a three part digital story talking to some of the thousands of Nigerian women trapped in trafficking and still struggling to get out, years after crossing the Mediterranean.

These are the voices of trafficked women themselves: tragic, instructive, inspirational, and most of all: real. Listen, share and let us know what you think. Welcome to our series.

Here are a few examples of what stories to expect during the first week (subject to change): 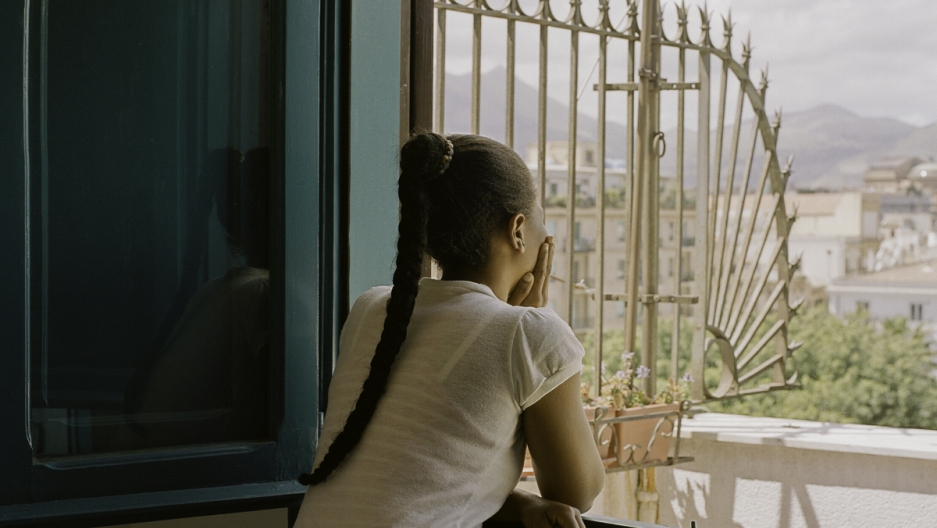 Thursday 5/18
Stuck in Palermo Pt. 1 of 3
Disheveled, barefoot, and bleary-eyed, the Nigerian girls are some of the first to walk off the boats. A dream realized; they step into Europe — though the scene is anything but romantic.

Caskets pass of those who didn’t survive the two days’ long journey across the Mediterranean, from Libya to the Sicilian port of Palermo. Babies wail and those sick and burnt from the effects of the gasoline mixing with the salt water, stumble towards the medical tent.

The Nigerian girls are given a plastic bag containing a liter of water, a piece of fruit, and a little sandwich, and are ushered to a vinyl tent for “vulnerabili” — the vulnerable ones.

For at least 30 years, Nigerian women have been trafficked into Europe for sex work, but numbers have spiked recently. In 2014, the trickle of a few hundred women a year grew to nearly 1,500. The following year, it increased again to 5,600. In 2016, at least 11,009 Nigerian women and girls arrived on Italian shores.

Friday 5/ 19
Radio + Web
Olympic Trafficking
Brazil’s problem with trafficking became apparent last year during the Olympics when it was discovered that a number of people building venues for the Games were trafficked. 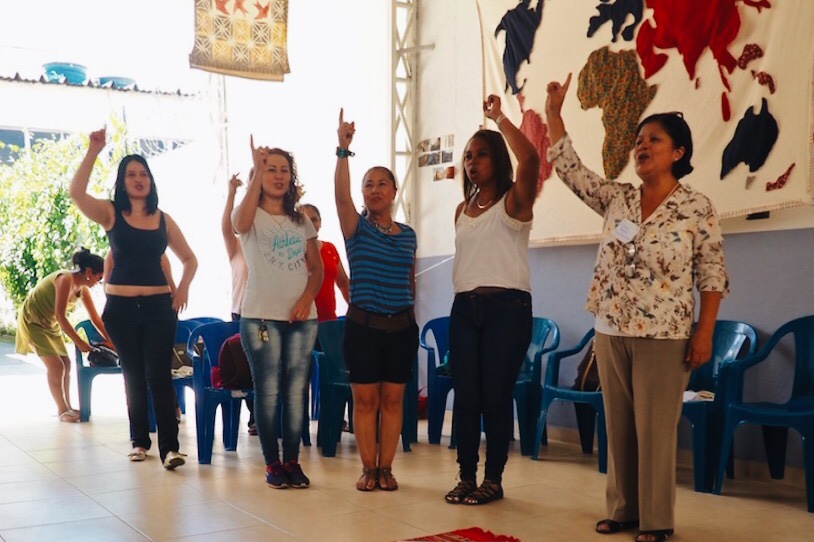 Reporter Catherine Osborn meets a woman who travelled from Bolivia to Brazil to work in a clothing factory. She found herself and her young son forced to live in terrible conditions and working without pay. Now she helps other women who have been trafficked.

As the India and Brazil radio pieces set the stage during week one, the Across Women’s Lives team will be gearing up for part two of the series live from Uganda.

Stuck in Palermo Pt. 2 of 3
Web
After an arduous sea voyage, Fortune landed in Sicily and was put in an overfilled housing structure for migrants. She escaped, and was trafficked into sex work, standing by the side of the road, selling her body to strangers, who sometimes are violent. She’s one of an increasing number of Nigerian women being trafficked into Europe, and stuck in Sicily. 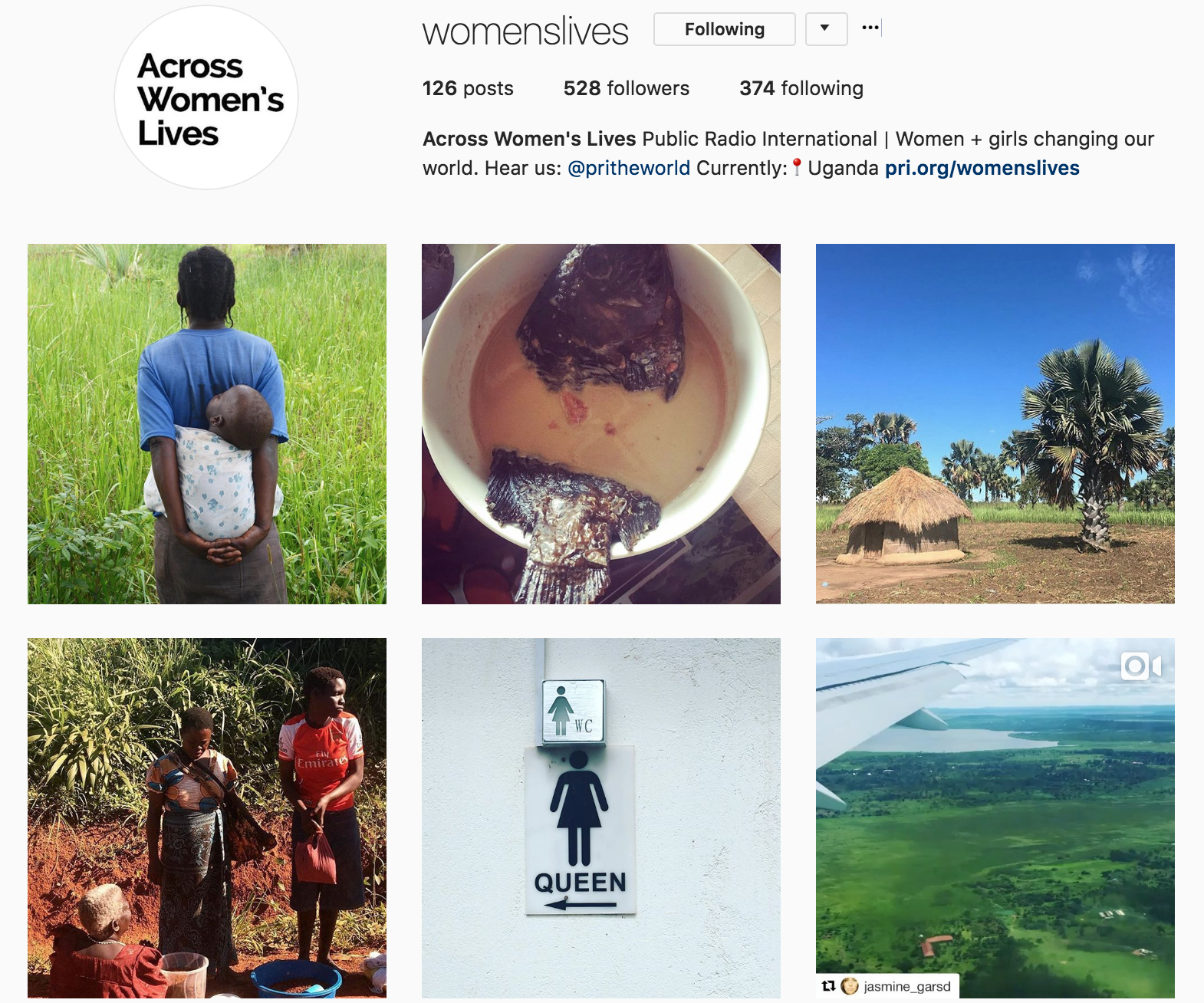 We invite you to follow along on social media during for daily behind-the-scenes insights into our journalism as we Facebook Live our adventures, share glimpses of our reporting in the field on Instagram and crowdsource questions to inform our reporting.

Jocelyn Keko is a household name in East Africa. The self-proclaimed queen of rap, Keko is a well-known Ugandan personality with an interesting personal story.

In addition to a very public battle with drug addiction, Keko has very publicly fought for LGBT rights in Uganda — where being gay is illegal.

Team AWL will meet up with Keko in Kampala on Sunday for a Facebook Live interview and mini-performance. Be sure to like us on Facebook and stay tuned for more information!

On May 22, we’ll kick off a week full of stories reported all around Uganda by multimedia reporter Jasmine Garsd and producer Andrea Crossan. You can catch the audio packages daily on PRI’s The World, the full story on www.pri.org/womenslives and our social-first reporting on our Instagram and Facebook.

In addition to the stories from Uganda, we’ll bring you more stories of life after trafficking from the US-Mexico border, Sicily and the US.

Here’s a taste of what to expect from us on next week (subject to change):

The story of one woman’s journey from a boarding school in Lagos, Nigeria to being trafficked to Italy, Spain and England - where she eventually made a run for freedom. And she now has built a life for her and her family in London as a baker.

Stuck in Palermo Pt. 3 of 3
Web
Part three of our three-part story about Nigerian women being trafficked to Europe at alarmingly high rates. Many of these women get stuck in the port of landing — Palermo, Sicily.

Tuesday 5/23
There Are Always More Girls
Radio + Web
Sister Rosemary Nyirumbe spent her years during the war with the LRA helping girls who had escaped from the bush. She set up schools to teach them sewing. But even though the war is over in Uganda, there is a civil war just across the border in South Sudan. So now many of the girls helped by Sister Rosemary, train the girls and women who have fled across the border. And Sister Rosemary is opening up another vocational center on the S Sudan side of the border.

Wednesday 5/24
Reintegrating a Nation
Radio + Web
Tens of thousands of Ugandans were harmed by the Lord's Resistance Army. Boys were stolen from their homes and forced to be child soldiers. Girls were taken as sex slaves and trafficked. Over a million people were displaced. After three decades of crisis, the government offered immunity to LRA soldiers who gave themselves up. Now thousands of victims walk down the same streets as their perpetrators. What's it like to heal a generation of people who were trafficked - and in turn, trafficked others.

Thursday 5/25
Exporting Maids
Radio + Web
Uganda has high unemployment so often young women go to employment agencies to get jobs as domestic staff in places like Dubai and Doha. But too many are ending up as sex slaves or denied basic human rights.We will meet with women who took jobs and ended up stranded in the Middle East after it all went wrong. What's being done to help women when they return? What has the Ugandan government done to stop this? We look at both problem and solution.

Friday 5/26
The Family Secret
Radio + Web
The story of Francisca, a woman who was sex trafficked on the Mexico border as a teenager in the 1940’s. She met an American airman and came to the US. She’s lived a quiet life, raising a family in Queens. Now as she reflects on her life, she shares the secret she’s kept from her family about her life in Mexico.

Kemiyondo Coutinho is a Ugandan actress, writer, poet, producer and director. She’s also the founder of A Ka Dope — a popular monthly open mic that brings together Kampala’s artists. We’ll speak to her at a showcase about Kampala’s arts scene, life as an entrepreneur, her favorite local female artists and then stick around for the show. 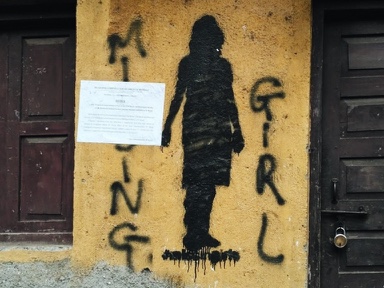 What do you do when your traffickers are your own family?
Radio + Web

India has the highest rates of human trafficking in the world. Part of the problem is that it’s all too common for parents to traffick their children - into sex slavery and into domestic slavery. Chhavi Sachdev profiles a teenager who had to escape from her own family after they trafficked her for sex. Now she works to help other girls who can’t go home again.

In Your Own Backyard: Connecting the Dots
Facebook Live

In the launch episode of “AWL Live,” we’ll discuss and digest the series and talk about how human trafficking happens everywhere — including small town USA.

Throughout the next two weeks we’ll be asking our audience to tell us if human trafficking has touched their communities in any way. We’ll talk about the anecdotes that they share with us and connect the dots back to US, discussing domestic trafficking data from Polaris.