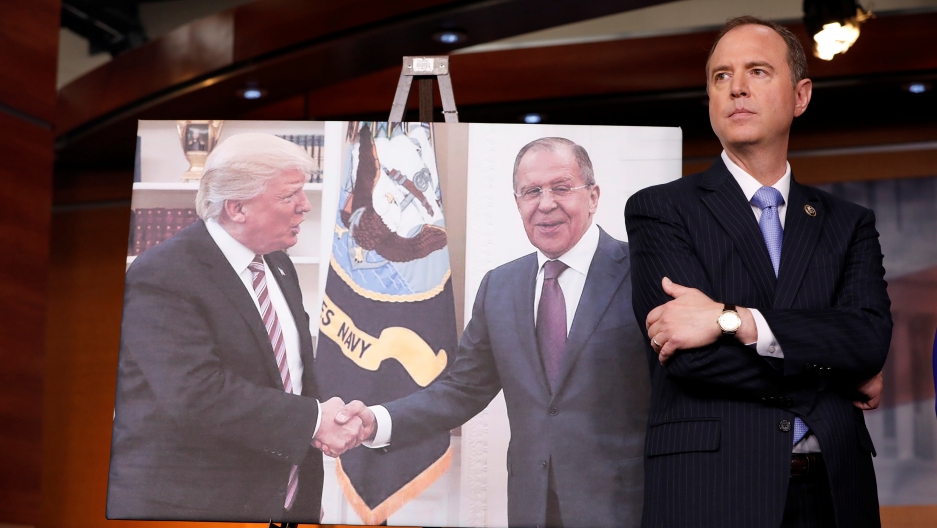 Rep. Adam Schiff, a California Democrat says if Congress doesn't get the documents it needs to investigate Trump's actions, he backs issuing subpoenas.

Russian President Vladimir Putin offered Wednesday to share with US Congress his records of that now fateful White House meeting between President Donald Trump and some of Russia's top diplomats.

Rep. Adam Schiff, a California Democrat and the ranking member of the House Intelligence Committee, doesn't know whether to find the offer ironic, amusing or disturbing.

"I'm running out of adjectives and expletives for the situation," Schiff says. "You have probably the last person that the president wants to vouch for him, vouching for him, and that's Vladimir Putin. You know things have gotten pretty bad when you're asking for Putin to lend you credibility on the Russia issue."

The World spoke to Schiff on Wednesday. The interview has been edited for clarity.

The World: Has former FBI Director James Comey said anything to you or the Intelligence Committee that has indicated interference from President Trump in an investigation? If so, what's been said?

Adam Schiff: Well, he certainly didn't describe the meeting that was reported in the New York Times. I wasn't aware of these memoranda until I read that article. And we've had the [former FBI] director come in twice just within the last couple months. We would never have imagined we'd need him to come back so soon before the Congress. But we do need to get to the bottom of this. And between the account of the director as it's reported and what the president has been relaying, I think people would probably have a lot more faith in the account coming from the director of the FBI.

Based on what you already know about Mike Flynn's trips to Russia, are you inclined to believe there is fire behind the notes that James Comey took after his meetings with Trump back in February, or is it probably just more smoke?

I think these allegations are the most concerning so far. The president's own admission a week ago that he fired Comey because of the Russia investigation and that in fact he had asked Comey about whether he was a subject of investigation at the time, where he acknowledged Comey was worried about keeping his job — those were serious. This is yet again another indication that there's a pattern here. Now this is all on the basis of public reports that have not been confirmed, so I don't think we should get too far ahead. We need to make sure that we find out whether these reports are true, what these memoranda say, if indeed there are memoranda of other conversations between the FBI director and the president that might reveal other improper conduct that sheds light on the president's motivations, because key to figuring out whether there was obstruction [of justice] is what the president's intent may have been.

Russia issued the first photos of Trump, Russia's Foreign Minister Sergei Lavrov, and Russia's Ambassador to the US Sergei Kislyak meeting in the Oval Office. Russia has now said they can provide transcripts of that meeting. What are your thoughts on how the White House is handling intelligence?

Well, this is really breathtaking, that the account, the fact[s], the photos of this meeting are coming from the Russians and the Russians are now offering transcripts. After all, the Russians still deny that they were involved in hacking our democratic institutions. So the Russians have no credibility here, but it is more than a bit ironic, amusing, disturbing. As I like to say, I'm running out of adjectives and expletives for the situation that the Russians are offering to provide the evidence of what went on in the White House.

Are subpoenas the next step?

Rep. Schiff, how would you describe the moment in which we're living?

It's [moving] at a breathtaking pace and of course everyone is asking quite rightly, "Where does this all lead?" This most recent allegation is among the most serious, that the president of the United States told the FBI director to essentially drop an investigation into one of his top aides, the ... former national security adviser. That's a very serious business, which of course raises the prospect of whether there was active interference or obstruction of justice. I think there will be some pretty powerful evidence if that's the case in the form of contemporaneous notes and memorand[a] written by the FBI director, and Congress certainly needs to get ahold of those. I think we need to bring the director back in in short order to testify before Congress.