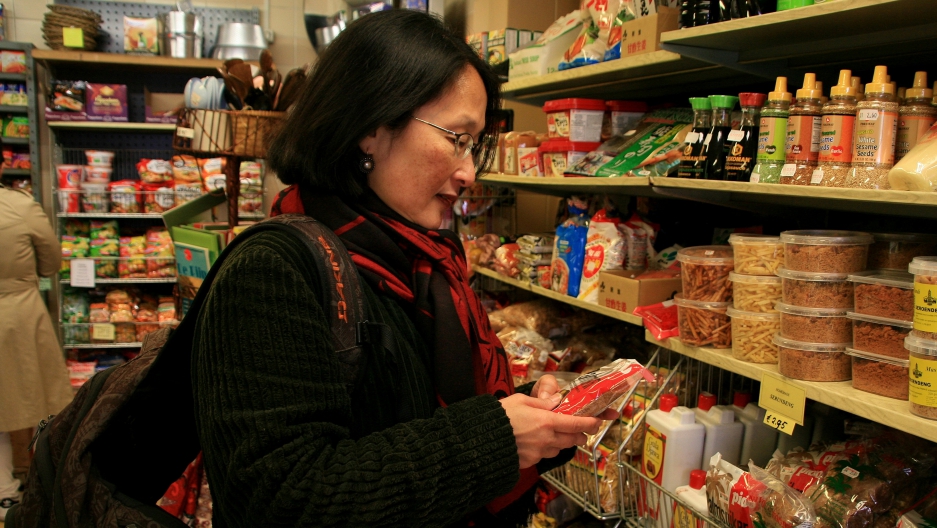 Linawati Sidarto has lived in Amsterdam almost as long as she lived in Indonesia, but she says she doesn't think she'll ever be able to feel Dutch.

Linawati Sidarto surveys the shelves in a small toko, or Indonesian grocery store, in Amsterdam.

"I need to get sambal of course, the hot sauce," Sidarto says as she selects the biggest jar of a fiery-red paste commonly used in Indonesian cooking.

Sidarto, 51, often comes to this toko to buy food that reminds her of home. She was born in Jakarta, but has lived in Amsterdam for 19 years, almost as long as she lived in Indonesia. She has a Dutch husband and two teenage daughters whom she describes as "very Dutch." She also speaks fluent Dutch — yet she still doesn't quite feel like she belongs.

"There's a bit of a derogatory word for [non-Western] migrants, which is allochtoon," Sidarto explains. "My children will always say, 'Ah yeah, but mum, you're an allochtoon, you would never understand.'"

She laughs before adding: "It’s a running joke, but there's some truth behind it. Emotionally, I will never feel like I'm Dutch. I will probably never ever be able to say that I’m Dutch."

This question of who is Dutch — and what being Dutch means, and who gets to decide — has been fiercely debated in the Netherlands during recent months, with a divisive election in March revolving around issues of identity, integration and Islam. Extreme right-wing politician Geert Wilders was instrumental in stirring up nativist sentiment. Elements of his rhetoric were also adopted by the incumbent Prime Minister Mark Rutte. His open letter to people in the Netherlands to “act normal or get out” was widely interpreted as a call for immigrants to integrate — assimilate, even — to the greatest extent possible.

For relative newcomers like Sidarto, however, it's not always so straightforward.

"[The Dutch] don't necessarily easily let other people in their inner circle," she explains, recalling her first years here when she was in her 30s. "They do not ask you to come around to have dinner at their house or have a drink. They're polite with you at work, and then they leave. That was very, very difficult for me in the beginning."

Coming from Indonesia, a former Dutch colony, Sidarto spoke the language pretty well before she even arrived and had relatives already living in the Netherlands. Still, she struggled to make it her home. Even now, most of her friends are other immigrants or Dutch people who have lived abroad.

For Kami Zarker, 42, the experience of trying to become Dutch was even trickier.

Zarker arrived as a refugee from Iran in 1994; he was then a 21-year-old with no Dutch language skills and zero knowledge about the Netherlands. At a botanical garden in Amsterdam, where he goes to be reminded of his home country, he explains how, in his first years here, he worked hard to learn Dutch and make friends. His application for asylum was denied, but he managed to get a study visa instead, and eventually was granted citizenship.

Zarker now has an Iranian wife and two kids in Amsterdam. When he goes back to Iran, he says he no longer feels at home — but nor does he feel fully at home in the Netherlands. He jokingly describes himself as 60 percent Dutch and "40 percent myself."

For second-generation immigrants, the question of how Dutch they are is even thornier.

"Sometimes I feel Dutch, but with all these things that happen in the world, some Dutch people don't see me [as] Dutch," Abu Leil adds, a note of frustration in her voice. "I always think, 'Oh, OK, what am I?'"

Abu Leil went to an Islamic school here and wears a loose headscarf. She says all but one of her friends are Muslim, which she admits she finds “weird.” Still, she has never felt she had to justify her identity to anyone, apart from one time.

Pouring some sweet Moroccan tea, a staple in her house, she recalls an incident during her first year at the university when her classmates reproached her and her Muslim friends for being too “cliquey.” Abu Leil couldn't see what was wrong — she says everyone at her university hung around in a clique of some sort. It got so tense that a professor intervened and asked Abu Leil and her friends what was going on.

"And we were angry, because we thought, 'Why are you coming to us, why don’t you talk to the classmates [too]? Why is it always us? What did we do wrong?' When I think about it, it makes me angry and confused."

The idea that a newcomer has to go the extra mile to fit in is a common one in the Netherlands, indeed in many countries.

But at what point does someone who has built their life here just get to be themselves and still feel like they belong?