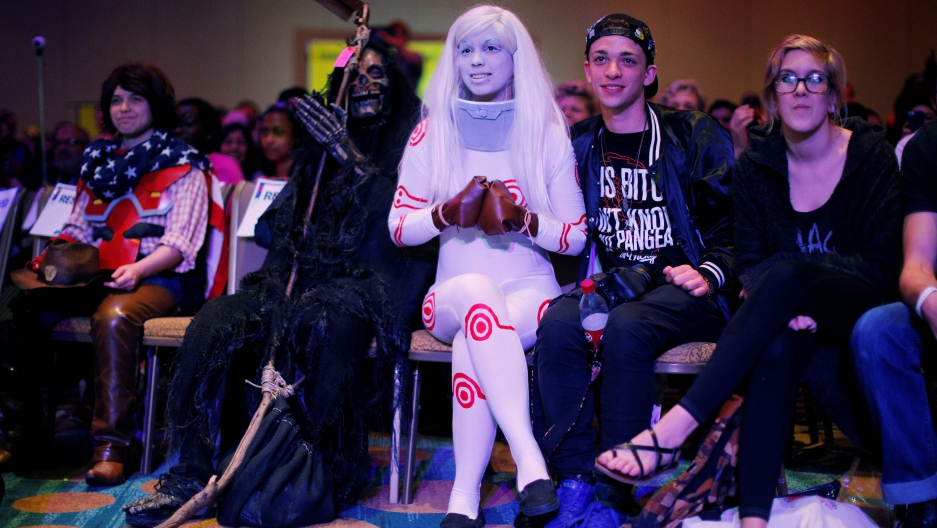 Participants in the cosplay contest sit in the audience during the Gaming Opening Party at the South by Southwest (SXSW) Music Film Interactive Festival 2017 in Austin, Texas, on March 16, 2017.

Cosplay — dressing up as a favorite fantasy character, then heading out to public gatherings like comic-cons — used to be considered so nerdy that even comic geeks teased others who did it. But thanks in part to social media, perceptions are changing: As cosplayers post videos and photos of themselves in fantastical, meticulously designed costumes, cosplay has become more accepted, even cool.

But at conventions where skin tones can range from “Hulk” green to “Hellboy” red, black cosplayers can still find themselves justifying their costumes — especially when the characters they’re depicting aren’t black.

Harry Crosland, who has cosplayed as Superman at conventions (his wife, Gina, sometimes goes as Wonder Woman), says he’s been asked whether he’s the “Universe 24 version” of Superman — as in, from an alternative universe. “And I'm like, no. I'm just Superman,” he says.

Cosplayer Suqi Yomi has had a similar experience cosplaying as Raven, a lead character from the DC comic book series “Teen Titans.” “I've actually had someone go, 'Oh, why don't you just be Bumblebee,’” she says, referring to a lesser-known character on the show, who is black. “I'm just like, um, as much butt as Bumblebee kicks, I love Raven.”

“And somebody's just like, 'But Raven's white.' I'm like, 'First of all, no she's not. She's not even human. She's Azarathian, and she is half-demon, and her skin is gray. So your argument is fully invalid.”

Yomi, who grew up in New York’s Coney Island, says she’s also contended with racial stereotypes about cosplay at home. “I’m walking through the neighborhood, and I’ve had like, so many people staring at me and one of them like, was my neighbor. And they're all looking at me like, ‘What the hell does she have on?'”

“They look at me like, with this stereotype — because I've actually gotten this all the time growing up. Like, 'Yo, you're black. Why are you doing all this quote, unquote ‘white people stuff?'” In Coney Island, she says, she only knows three or four other cosplayers.

A few years ago, when a cosplayer named Chaka Cumberbatch started the hashtag #28daysofblackcosplay to coincide with Black History Month, the concept found major traction.

“When we call out racism in this subculture, we are often ridiculed, silenced and told to make a space of our own if we want to see our faces. Challenge accepted,” Cumberbatch wrote in a post about the hashtag last year, for the website Black Girl Nerds. “This is how we’ll represent ourselves. This is how we’ll uplift each other. This is how we will make this hobby open, inclusive and welcoming to everyone.”

Cosplayer Brittany N. Williams, who writes for the site Black Nerd Problems, describes the #28daysofblackcosplay another way: “It's like a bat signal we can call out to each other,” she says.

“Like, say, you're someone in the middle of nowhere in Wisconsin, and you're like, I kind of want to do cosplay, but I don't know what to do. I don't know, do black people even do this? I don't know. Then just hit that hashtag. There you go.”

But black cosplayers face other battles, too. An appalling number of white cosplayers have taken to wearing blackface when depicting characters like Storm from “X-Men.”

“When you decide that OK, 'I'm going to do Storm or I'm going to do Michonne from "Walking Dead," and I've got everything else right, I've even got the wig, but now I want to color my skin,' that's a no,” Crosland says.

“Because I feel like — my skin is not your costume.”

Yomi and Williams also say they’ve found themselves explaining to other cosplayers that blackface is not OK; it's not the same as painting your face “Hulk” green. “I tell them, I need you to go on Facebook right now and go through your friends list and see which one of them actually has green skin that was born of this planet,” Yomi adds.

All this refereeing can be exhausting, which is not what cosplay is supposed to be. Cosplay is just supposed to be fun — something you share with your friends.

“Sometimes we don't go to the movies to actually see the movies, we go to movies to get cosplay ideas,” Crosland says. “That movie sucked, but the costuming was awesome!”

This article is based on a story that aired on PRI's Studio 360 with Kurt Andersen. A version of the audio story first appeared on Eric Molinsky’s podcast “Imaginary Worlds.”