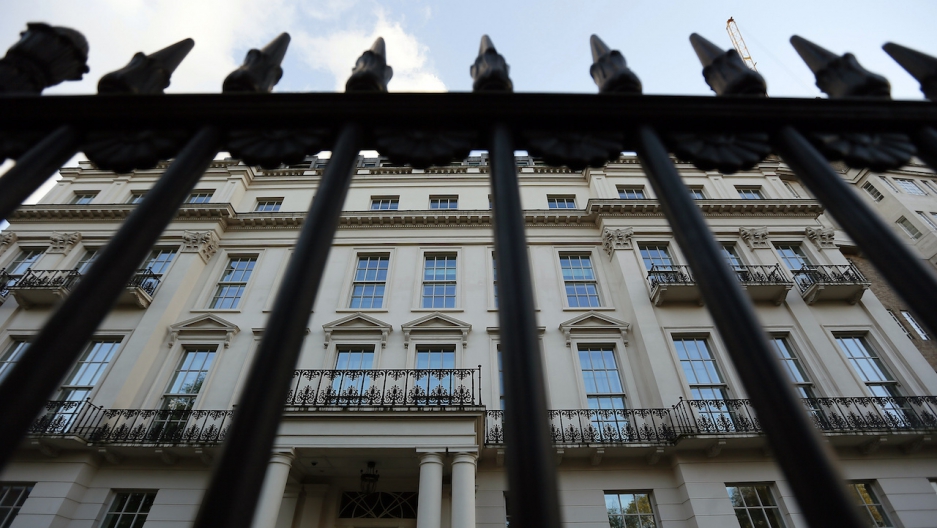 This Nov. 5, 2012, photo shows a 45-bedroom mansion in the upscale Knightsbridge neighborhood of London that had belonged to former Lebanese Prime Minister Rafik al-Hariri until his assassination in 2005. It was on sale in 2012 for hundreds of millions of dollars.

When you start a bus tour, it's traditional for the guide to boast a little about the city you're about to see.

Anti-corruption campaigner Roman Borisovich does not run a traditional tour of London.

"Ladies and gentlemen, I welcome you onboard the Kleptocracy Tour," he announces through the PA system, as soon as we are seated. "As a result of these tours, we have firmly labeled London as the most corrupt place in the world. By square foot, London has attracted a highest-ever concentration of dirty money."

Britain has a reputation as a place where most people play by the rules: obey the law, pay their taxes, stand in line politely at the post office. But over the years, that stuffy stability has also proved appealing to people who make their money in less conventional ways. People who want somewhere safe and reliable to stash that money. And London provides that — particularly London real estate.

This year, Transparency International identified $5.4 billion worth of London properties bought by individuals with suspicious wealth, most of them confined to a few up-market neighborhoods. The Kleptocracy Tour takes in most of them, starting in the beautiful Georgian terraces around Victoria, and moving through the luxury apartments and mansions of Knightsbridge, Mayfair and Notting Hill.

According to The Guardian's Luke Harding, who is another speaker on the tour, the use of London as a bank vault for stolen money follows an established pattern. "Essentially you have this global, rootless, transnational elite who are using London and London property as a gigantic bank," he says. "You steal your money elsewhere, you buy these properties. And then you have it to keep. And that's depressing. It's wrong. It's immoral."

Harding is a specialist in the Russian connection to such money laundering. He has uncovered a scheme he calls "the laundromat": stolen millions that start out dirty in Moscow, and with the help of British lawyers, accountants and bankers, come out clean in the West. He has identified $778 million of funds processed by British high street banks that have suspicious origins. Leaked bank details have allowed him and other journalists to track this cash and watch where it's spent. As well as property, it went toward purchases of diamonds, furs and private education. 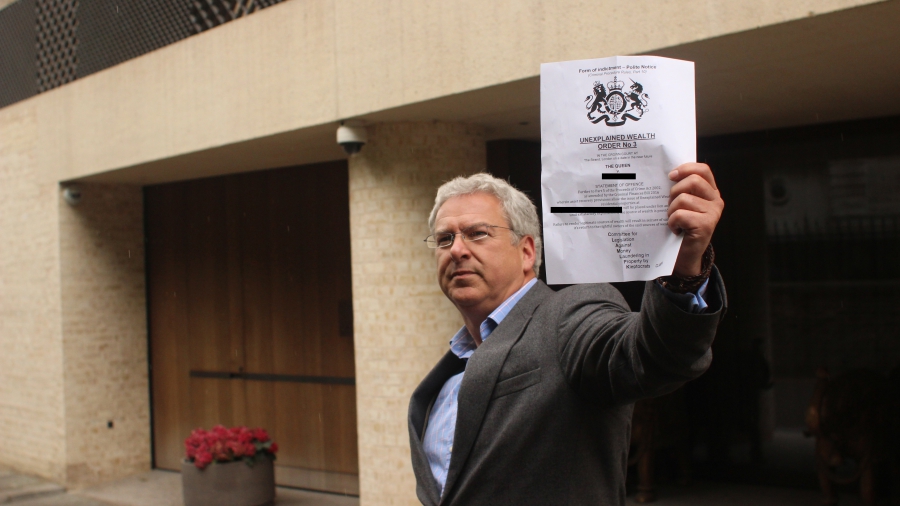 Anti-corruption activist Arthur Doohan delivers an "Unexplained Wealth Order" to a London property believed to have been purchased with the proceeds of corruption.

As part of the Kleptocracy Tour, Borisovich's activists have been hand-delivering letters to the doors of properties owned by oligarchs. Each contains an "Unexplained Wealth Order" — a new legal instrument introduced by the British government to combat corruption. In theory, it can force property owners with mysterious wealth to explain themselves in court.

According to Arthur Doohan, another activist who works with ClampK, the ghost of the British Empire helps make the UK an ideal target for complex accounting. Former British colonies in the Caribbean now function as offshore tax havens, with their own semidetached legal and tax status.

Doohan says the influx of large quantities of cash presents risks to British democracy. "That amount of money hanging around is a danger," he says. "It will look to protect itself. It will look to bribe people to get them to turn the other way. It's immoral. It's unjust. It is an unexploded bomb sitting under us."