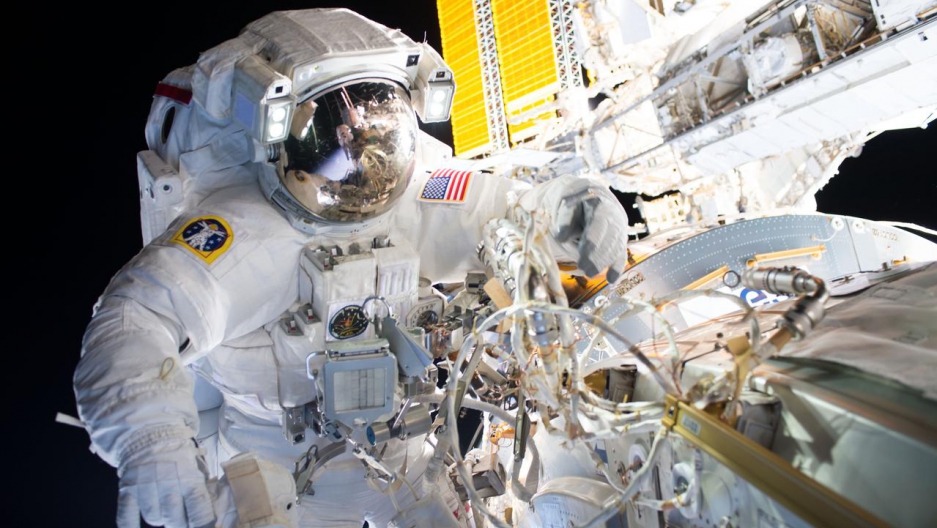 An astronaut at the International Space Station in 2016 is shown here. Spacesuits like the one used here are in short supply at NASA.

NASA’s spacesuit closet is looking a little bare these days, according to an audit released last month by the agency’s Office of Inspector General.

Since 2007, NASA has invested roughly $200 million for developing new spacesuits but auditors say the technology is still years away from being ready to use for space exploration. At the same time, the suits currently used by NASA astronauts on the International Space Station were developed more than 40 years ago, and are in waning supply. Of 18 original suits, just 11 still have working life-support systems.

Science reporter Loren Grush, who covered the story for The Verge, sees a small bright spot: “The good news is that NASA is thinking ahead and they are putting money into developing new spacesuits, which they're definitely going to need because they have very ambitious goals — like going into deep space and onto Mars.”

But in its report, the OIG suggests the development projects aren’t going smoothly. “As different missions require different designs, the lack of a formal plan and specific destinations for future missions has complicated spacesuit development,” the auditors state in the report. “Moreover, the Agency has reduced the funding dedicated to spacesuit development in favor of other priorities such as an in-space habitat.”

As Grush explains, NASA expects to need spacesuits for a number of missions in the near future. The different needs of those missions pose a conundrum for the agency. “NASA’s hoping to go to lunar space or near-lunar space, and so you’re going to need a spacesuit for that,” she says.

“Also, we have some new flights coming up of this new rocket [the Space Launch System] that NASA is launching, and they're going to need not spacesuits for spacewalking, but suits just for the astronauts to wear when they're on those flights.” Then there’s Mars, she adds: “You're going to need a special spacesuit for the Mars surface because it's going to be a very different environment than other places that we've been to in space before.”

“The audit was very critical of them doing that because there were a lot of recommendations to stop putting money into that program,” Grush says. “And they just now recently stopped — and basically, the audit made it seem like they were squandering that money.”

In a response, NASA called the audit’s take on the Constellation Program spacesuits “overly critical,” arguing that information and hardware gained from the program have helped other spacesuit development efforts.

Suits for the Orion mission will be adapted from old space shuttle launch suits, but the schedule is tight: They’re expected to arrive in March 2021, and the Orion could launch as early as August 2021. “So, it could be kind of close for when those spacesuits will be done,” Grush says. “However, if the launch [date] slips, they might have a little more time to make those suits ready.”

The audit concludes by suggesting that NASA develop a formal plan to develop and test new advanced spacesuits, and compare the costs of making them against the costs of maintaining old ones. The space agency has agreed to follow the OIG’s recommendations — and plans to do so by the end of September.