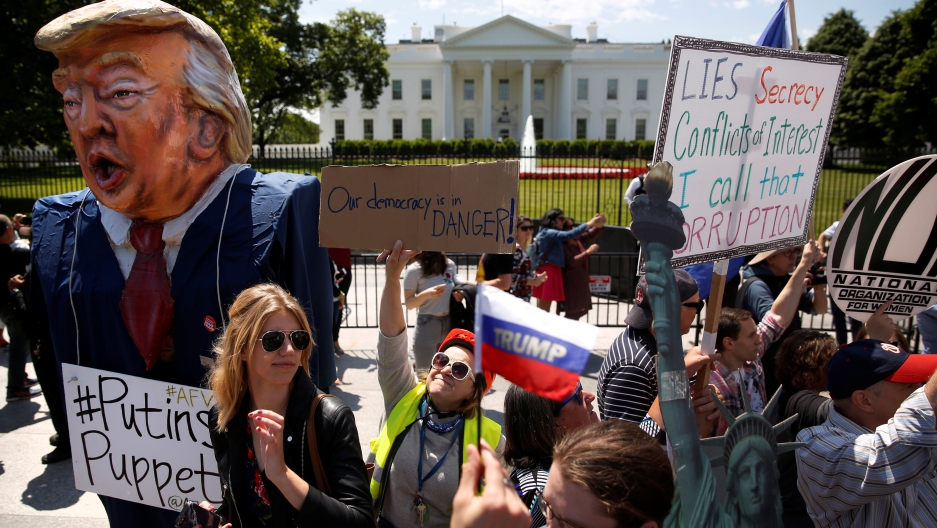 Protesters are pictured outside the White House, on May 10, 2017. One sign says, “Our democracy is in danger.”

A lot of folks have been quick to denounce Donald Trump’s falsehoods about the firing of FBI Director James Comey. Several respected and experienced nonpartisan analysts and former top government officials have said the United States is facing a national crisis as a result. But is it fair to talk about Trump as an autocrat or a demagogue or even a fascist?

So, we quizzed Cas Mudde to get some very quick answers. Mudde is a Dutch-born political scientist at the University of Georgia.

“I think he has strong autocratic tendencies, which is, in part, how he ran his business,” says Mudde. “But he still functions within a democratic system.”

“An autocrat is someone who rules undemocratically, and pretty much by himself, without any accountability to others,” he clarifies.

So Trump is not an autocrat.

“To become an autocratic ruler,” explains Mudde, “he will have to pretty much dismiss the democratic system, or just by and large make them powerless, and I don’t think we’re that far yet.”

The term authoritarian is similar to autocratic, says Mudde, although in the world of political science, it’s generally used to describe regimes rather than individual rulers. An authoritarian regime, explains Mudde, is one where “pretty much the people do not decide who rules, and you’re not accountable to popular support.” So, no on that count.

But an authoritarian also emphasizes law and order, discipline and loyalty. Mudde says in that sense, it’s fair to describe Trump as authoritarian.

Donald Trump is a long way from being a fascist, says Mudde.

“Fascists are not just authoritarian,” he explains, “but they’re actually totalitarian, which means they want to control every aspect of life, not just political, but also economic and social.”

“Also,” he adds, “fascism is a very strong ideology, and you can’t really say that Trump is a very ideological person.”

“A demagogue is someone who pretty much promises everything to everyone,” explains Mudde. “He has a tendency of doing that, in the sense that he has taken up pretty much every position on every issue. But since coming to power, he has been relatively straightforward on some of the core issues. He has flip-flopped on foreign policy, but foreign policy tends to be reasonably secondary to most people. He hasn’t flip-flopped on the Muslim ban or the wall. So, I don’t think really you can call him a demagogue.”

“I’m not totally sure what Nixonian means,” punts Mudde, “except for a president that was impeached, and maybe that [term] is more used by people who have some wishful thinking about impeachment.”

So what is Trump?

Mudde says Trump has evolved into someone who rules as a member of what he calls the "radical populist right." Meaning he’s using a mainly right-wing policy agenda, and uses populist tactics, presenting himself as the voice of the people against the Washington power establishment.

He also leans toward authoritarian, in the way he describes many issues in terms of law and order, discipline and loyalty. “He’s also very nativist,” Mudde explains. “He has a very narrow understanding of what the American people are and sees anyone or anything that isn’t like that, as threatening. Be that Muslims, be that Mexicans, be that gays to a certain extent, be that lefties.”

Overall, Mudde says he’s not optimistic. But that’s not really because of anything that’s happening. “I come from a country — the Netherlands — which is deeply Calvinist, and although I’m secular, we are not really very good at optimism.”