Catholic priests lead a protest march at an anti-nuclear demonstration outside of Seoul in April 2017.

Standing up to his own government is nothing new for Moon Kyu-hyun. The 70-year-old Jesuit priest from South Korea made international news back in 1989, when he crossed the border into North Korea illegally.

The Catholic priest’s unsanctioned trip was a political act of defiance against South Korea’s strict National Security Law, which prohibited people in the South from almost any contact with North Korea.

The Rev. Moon was promptly arrested when he returned to the South. And he ended up spending three and a half years in prison.

“Peace and hope is what life is all about,” Moon says, reflecting on lessons learned during his time in jail.

In that same spirit, Moon — whose Christian name is Paul — is part of a group of Catholic clergy taking the lead in a growing anti-nuclear movement in South Korea. 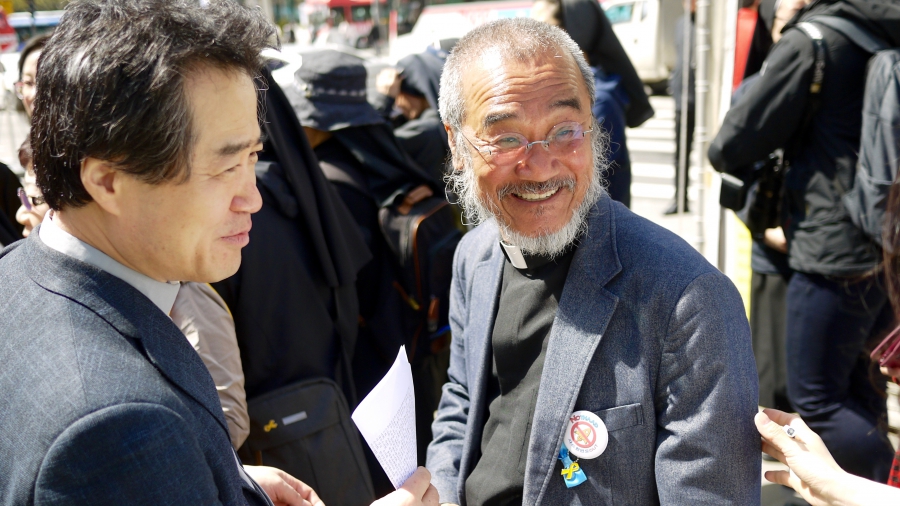 Father Moon Paul Kyu-hyn is a Jesuit priest and part of a group of Korean Catholic clergy speaking out against South Korea's dependence on nuclear energy.

Moon says he is opposed to nuclear weapons, including the North Korean nuclear program that’s been a big part of rising tensions in northeast Asia. But he’s also against recent US actions on the Korean peninsula.

“THAAD is a weapon of war. You can’t be for peace if you’re preparing for war,” Moon says, referring to the anti-missile system recently deployed by the US military in South Korea.

Beyond the nuclear security issue though, Moon and other Catholic leaders are pressuring the South Korean government to rethink the country’s dependence on nuclear power. That is no small order, as this is a country that relies on more than two dozen nuclear power plants for about a third of its electricity.

“Getting rid of nuclear power is the only way to survive, to save ourselves, and save the world,” Moon says during a recent anti-nuclear demonstration in downtown Seoul, where Catholic priests and nuns announced an effort to collect a million signatures in support of their campaign.

One event that helped push Korean Catholics to get involved in the anti-nuclear movement was the 2011 nuclear meltdown in Fukushima, Japan.

The Rev. Cho Hyun-chul says the event resonated with much of the Korean public, whether they are Catholics or not. Cho teaches theology at Sogang University in Seoul.

“I think because we are in the same destiny. If [South Korea had an accident] just like Fukushima, then there is no room for us to live here. There is no more safe land,” Cho says. 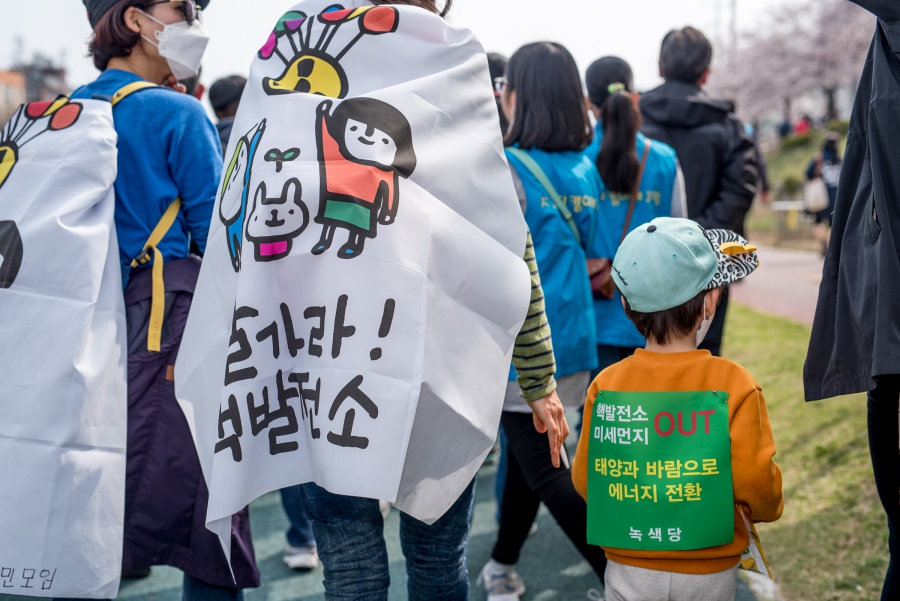 Families took part in an anti-nuclear protest led by Catholic clergy outside of Seoul in April 2017.

"It's directly against God's intention," Cho says. All Christians, he adds, "believe that God created the universe, and there is the divine order." Cho says the threat posed by nuclear energy goes against that divine order.

South Koreans had a nuclear scare of their own last year. In September, two big earthquakes hit the southeastern part of the country, causing four nuclear power plants to shut down temporarily.

Three months later, Koreans got to see a fictionalized version of what a full-blown nuclear catastrophe might look like when the movie “Pandora” was released in December. Millions of Koreans saw the big-budget feature film, and Catholic anti-nuclear activists say it helped call attention to the issue.

Related: The biggest megachurch on Earth and South Korea's ‘crisis of evangelism’

Catholics here have also forged a somewhat surprising alliance. Japan and Korea have a long and troubled history, to put it mildly. But every year since 2012, Kim Hyun-joo has been part of a group of Korean Catholics who meet up with Japanese Catholics to work together on anti-nuclear protest activities. Kim is an anti-nuclear activist with the Society of Jesus in Seoul.

“When I first told people that I was planning to visit Fukushima, my friends and family didn’t think it was a good idea,” Kim says. After all, this Japanese city was the site of a real life nuclear disaster. 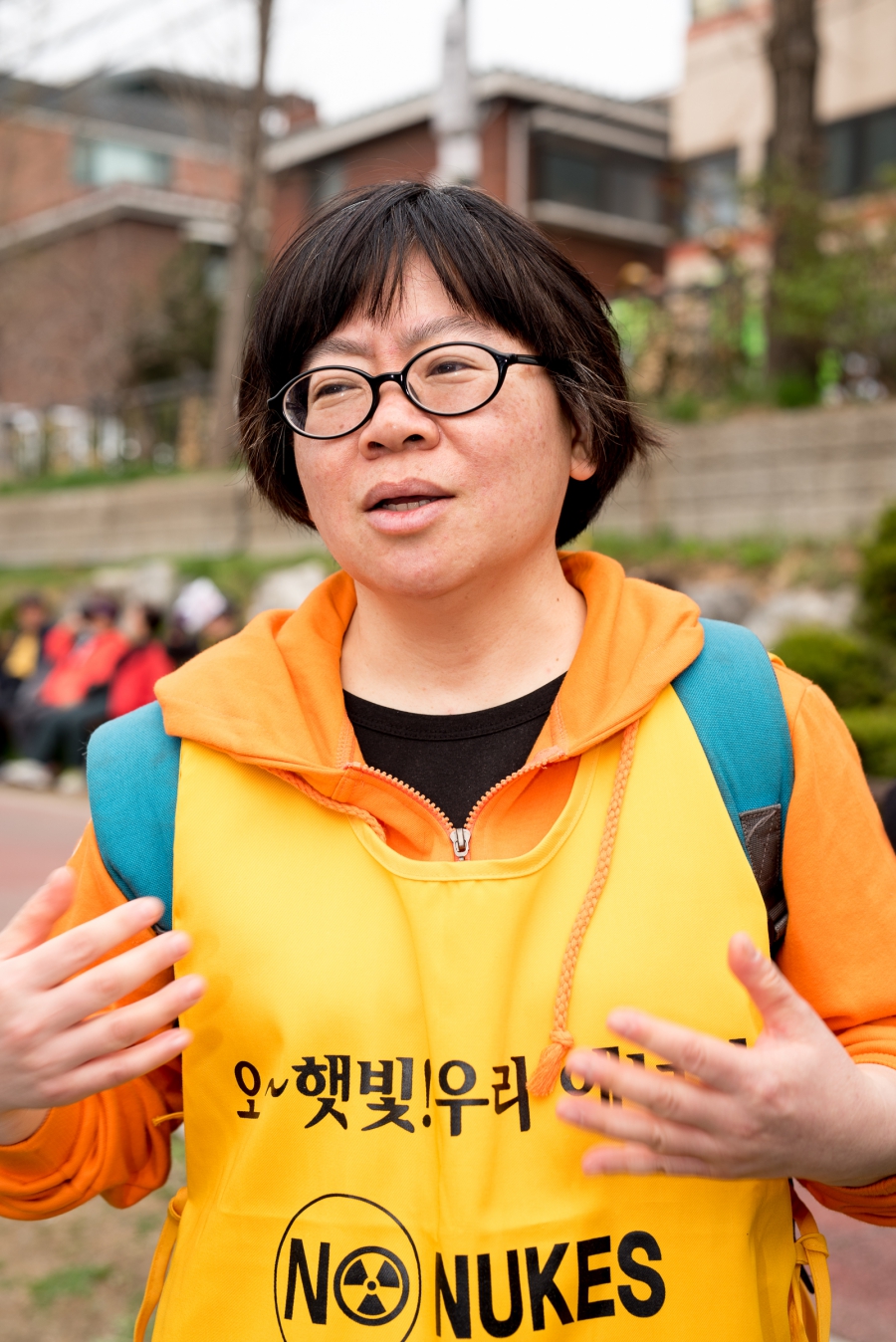 Kim Hyun-choo, who also goes by her Christian name of Maria, says the anti-nuclear campaign wants the South Korean government to stop building new nuclear plants, and close the outdated ones.

“But people ended up supporting me,” Kim says. Of course, many Koreans are still skeptical about the Japanese, she adds. But she says she has yet to hear fellow Koreans express anti-Japanese sentiments when she tells them about her work with Japanese activists.

Catholic leaders in Korea are following the example of Pope Francis. They say the environment is now a top priority, although they acknowledge the campaign against nuclear power is a going to be a long, uphill struggle.

There are about 5 million Catholics in South Korea. That’s only about 10 percent of the population. But in terms of their moral authority, Korean Catholics have some real influence, particularly among those on the political left, according to Kim Min-woong, who teaches world history at Kyung Hee University.

“Their voice is very prophetic. And they make people very seriously aware of the problems we are confronted with,” Kim says. He is a Protestant minister and describes himself as a political ally of liberal Catholic clergy involved with anti-nuclear demonstrations.

Related: In South Korea, pretty much everything is a little bit Buddhist. Including politics.

“Even though they are [a] minority, their commitment has been supported [by] so many people. And you know, these priests are not corrupted,” Kim says.

Corruption was a huge issue in this month’s presidential election. South Korea’s new President Moon Jae-in — who also happens to be Catholic — says he will tackle corruption.

But the best news for Catholic anti-nuclear activists came when Moon, during the campaign, pledged to cut back drastically on the government’s plans to expand the nuclear power industry. 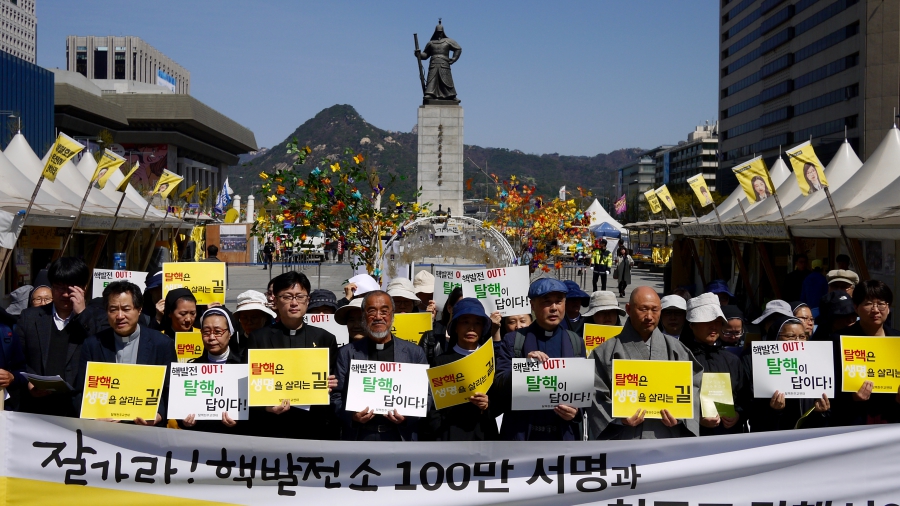 Catholic priests and nuns rallied in downtown Seoul in April 2017 to call attention to the dangers of South Korea's reliance on nuclear power plants for electricity.

Related: If you’re young and South Korean, North Korea might not seem so scary