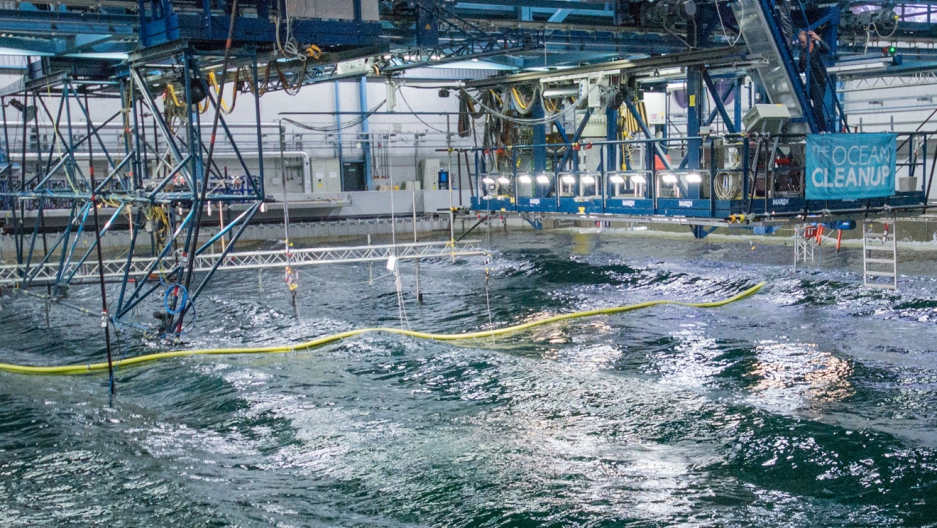 A scale model of the device to be used to collect plastic from the Pacific Ocean.

Courtesy of The Ocean Clean-up

Boyan Slat's innovative scheme seeks to use ocean currents to help gather up an estimated five trillion pieces of plastic — everything from bottles, to plastic bags, flip-flops and other detritus — from the planet's waters.

After years of research, including the first-ever detailed aerial survey of the largest garbage patch lying in the Pacific between Hawaii and the Californian coast, his Ocean Cleanup scheme has radically overhauled its plans.

Related: Meet the 22-year-old with a big idea for cleaning up the Great Pacific Garbage Patch

Slat now hopes to begin deploying the first clean-up system within the next 12 months, instead of in 2020 as first promised.

He also hopes to be able to remove 50 percent of the Pacific patch within five years, compared with initial estimates of 42 percent within a decade.

Initial ideas to deploy a 60-mile long V-shaped barrier, tethered to the seabed, to catch the plastics have been ditched.

The idea is that "to catch the plastic, act like plastic," Slat told hundreds invited to a special presentation in Utrecht, and revealing the first system is already in production in California.

Now a team of scientists and engineers plan to replace one large barrier with "a fleet of many smaller systems," Slat said. It should be more efficient and cost effective, he vowed.

Each of up to 30 smaller barriers will measure some about a mile in length.

Related: 5 countries dump more plastic into the oceans than the rest of the world combined

And they will not be attached to the seabed, but be weighed down by a specially designed floating 40-foot anchor, slowly moving with the plastic, driven by the same winds and currents.

According to the Ocean Cleanup project, eight million tons of plastics enter the oceans every year, much of which has accumulated in five giant garbage patches around the planet.

This plastic soup is created when the rubbish gets caught up in five main "gyres" — or rotating oceanic currents. The plastic takes decades to break down.

Slat showed off one old bottle crate, still clearly intact, and dated 1977, which his team picked up in the Pacific last year.

The micro pieces released as the plastics break down are dispersed through the seas, are also entering the food chain with harmful effects for all marine life.

Turtles, fish, dolphins and others can also become entangled in the rubbish, or swallow pieces, believing it is food, which they then cannot digest.

Months of tests have already been carried out using a small prototype launched in June off the Dutch coast in the stormy North Sea.

The prototype was built at a cost of 1.5 million euros ($1.69 million), financed through crowd-funding as well as donations, including from the Dutch government.