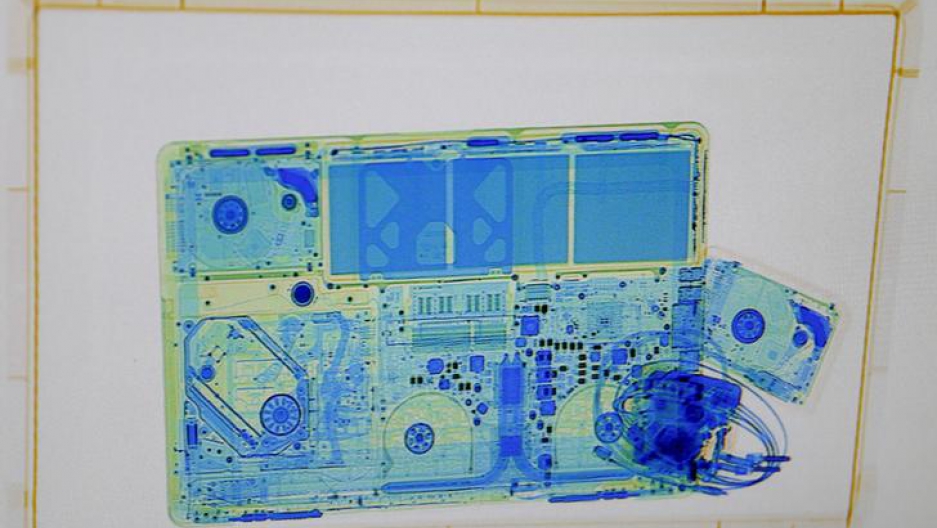 A laptop shows up on the screen of an X-ray security scanner at Sarajevo International Airport in Sarajevo, Bosnia-Herzegovina, on Feb. 26, 2014.
Credit:

Since 9/11, airline passengers have had to deal with the full panoply of security measures: bans on liquids, inspection of laptops at security gates, taking shoes off, not to mention coping with shrinking legroom and most recently, passengers getting dragged off planes.

Now, the Trump administration and the Department of Homeland Security are contemplating a laptop ban that could cause even more tension between passengers and airlines.

In March, the US prohibited bringing laptops and tablet computers (all electronic devices larger than a mobile phone) into the passenger cabins of US-bound flights originating from airports in the Middle East, Turkey and Morocco. The Trump administration cited fears that terrorists might try to hide a bomb in those devices. Laptops aren’t completely banned. They can still be carried as checked luggage. Nine international airlines are directly affected, including Royal Jordanian, Royal Air Maroc, Turkish Airlines, EgyptAir, Kuwait Airways, Saudia, Emirates, Etihad Airways and Qatar Airways.

Now, the Trump administration is reportedly ready to extend the US laptop ban to European countries. Some aviation security experts are scratching their heads.

“If, in fact, this move is in response to a fear that an explosive could be hidden within the components of a laptop, how does moving that bomb from the passenger cabin to the underfloor hold make it any less dangerous?” asks Patrick Smith who blogs about aviation security at askthepilot.com.

Trump may expand laptop ban to include Europe https://t.co/MpNlU5bSDm pic.twitter.com/81x7MqLNge

Smith says the latest proposal to extend the laptop ban is part paranoia and part idiotic.

“After all, bombs hidden in checked luggage have been blowing up planes for decades,” says Smith, citing the Pan Am Flight 103, Air India and Avianca disasters. He says the TSA has been really cagey about this issue. Simply put, prohibiting laptops from the passenger cabin may be hazardous. “It’s going to result in thousands of lithium ion batteries being relegated to the cargo holds aboard hundreds of flights every day, and these batteries have a terrible track record of starting onboard fires and resulted in at least one fatal accident,” says Smith.

A complete ban on traveling with laptops would get around the fire hazard problem. But that wouldn’t go over well with business travelers or families with children who have gotten used to setting up their laptops on the fold-down trays.

“People are frustrated enough,” says Smith. “I mean, the air travel experience, is, in a lot of ways, kind of maxed out as far as the frustration and tedium, and this just adds another element or frustration to it. Where does it stop?”

Homeland Security is reportedly set to announce its extended laptop ban on inbound flights coming from European countries. It begs an obvious question: Will the ban eventually be imposed on all US-bound flights?

“All any terrorist with a laptop bomb would need to do is change his or her routing,” says Smith. “I mean there are hundreds of daily flights coming into the US from Asia, Africa, Canada and South America that won't be affected. Or is this ban going to spread one continent at a time until every flight is impacted? Though we don't know, it's a strange move all the way around.”

As for the suggestion that a good book or a paper notebook and pencil are a reasonable option for air travelers, Smith isn’t buying it. He’s just not ready to forfeit his laptop.

“I'm not ready, and I wish I didn't have to. I don't know that there's a legitimate reason that I or tens of thousands of other passengers should have to.” In short, it’s all a big hassle. “People are going to have to go through the rigmarole of checking bags that they don't necessarily want to check in, and then you don't have your computer with you on the plane. People watch movies, they watch TV shows on their laptops, they get work done, and suddenly, now, that's so-to-speak off the table,” says Smith.

U.S. likely to expand airline laptop ban to Europe https://t.co/Sm9aEKESjr | An announcement is expected as early as today. pic.twitter.com/o0FTgHWjOR