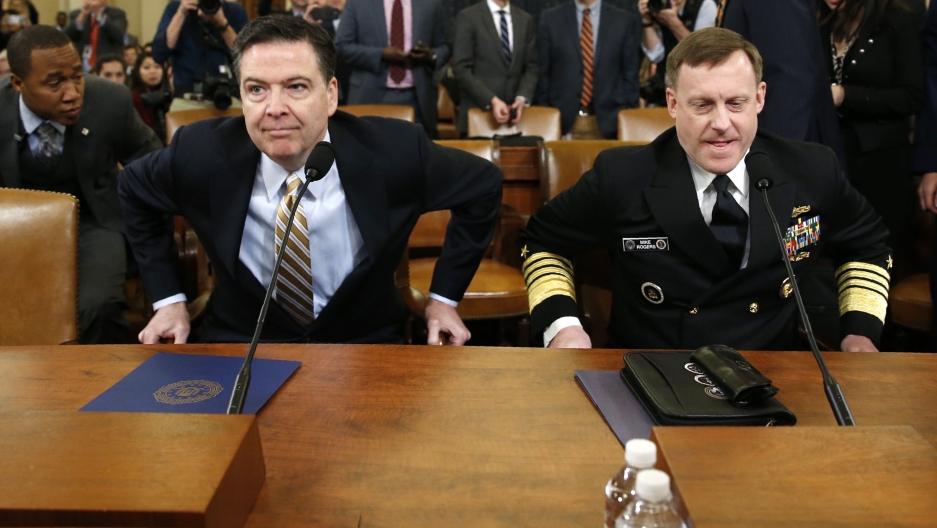 For many people, President Donald Trump's firing of FBI Director James Comey brings back memories of former President Richard Nixon, who called for the dismissal of the special prosecutor investigating the Watergate scandal.

Jeffrey Rosen, a professor of law at George Washington University and president of the National Constitution Center in Philadelphia, says while it has raised a lot of questions, Trump was acting within his authority when he terminated Comey.

The director of the FBI is supposed to serve for a decade, and Comey was into his fourth year before Trump dismissed him on Tuesday. The 10-year term was designed to go beyond a president’s time in office in order to “create a degree of independence,” says Rosen.

The FBI has been around for 109 years, and up until Tuesday, only one of its directors had ever been fired: Back in 1993, former President Bill Clinton fired FBI Director William Sessions on the recommendation of then-Attorney General Janet Reno.

"She has reported to me in no uncertain terms that he can no longer effectively lead the bureau and law enforcement community," Clinton said at the time.

Ethical concerns swarmed around Sessions, who had taken free trips on an official FBI aircraft and used government dollars to build a $10,000 fence at his private residence, according to The New York Times. Clinton dismissed him after he refused to resign.

“There is a specter haunting behind any [DOJ] firing, and that is Watergate,” says Rosen. “That was an attempt by Nixon to obstruct an active investigation into his own criminal activities — the ‘Saturday Night Massacre’ led to the firing of lots of people, and eventually the firing of the special counsel [investigating Watergate].”

He continues: “Congress responded to that drama by passing the Independent Counsel Act, which led to the Clinton impeachment. Congress then allowed that law to expire, so we’re back to the pre-Watergate situation where the only options for independent investigations are special counsel, still within the Justice Department, and potentially fireable by the president. Or a special congressional inquiry. If you want an independent inquiry, that really seems to be the best option.”

Even though President Trump has acted within his authority, some have suggested the US is careening towards a constitutional crisis. But that scenario isn’t black and white.

If Congress or the Supreme Court orders President Trump to turn over documents and he refuses, Rosen says the United States would see a modern constitutional crisis.

“But short of active obstruction of lawful orders, there’s a lot of conflict here, but not necessarily a constitutional crisis,” he adds.

Yet, at the end of the day, the White House isn't like a reality show, Rosen says, and though America’s current president has a background in entertainment, he is still bound to the rule of law.

“There is a sense that this is the constitutional version of ‘The Apprentice’ — where Trump believes he can fire anyone who displeases him,” Rosen says. “But that’s not the way the Constitution works. There are serious norms in America, built over two centuries, against executive interference with the independence of investigations — that is precisely what Comey staked his directorship on.”

He continues: “There are serious norms within the Justice Department, and it’s really important for the American people not to reduce this to personalities — Trump versus Comey — but to demand the facts so that Congress can make an independent judgment about whether or not there were serious violations of the law. There have been so many norms that have been broken recently, but this notion that the president can do whatever he likes, although he absolutely has constitutional authority to fire Comey, doesn’t mean that the norms of the American constitutional system won’t ultimately reassert themselves.”