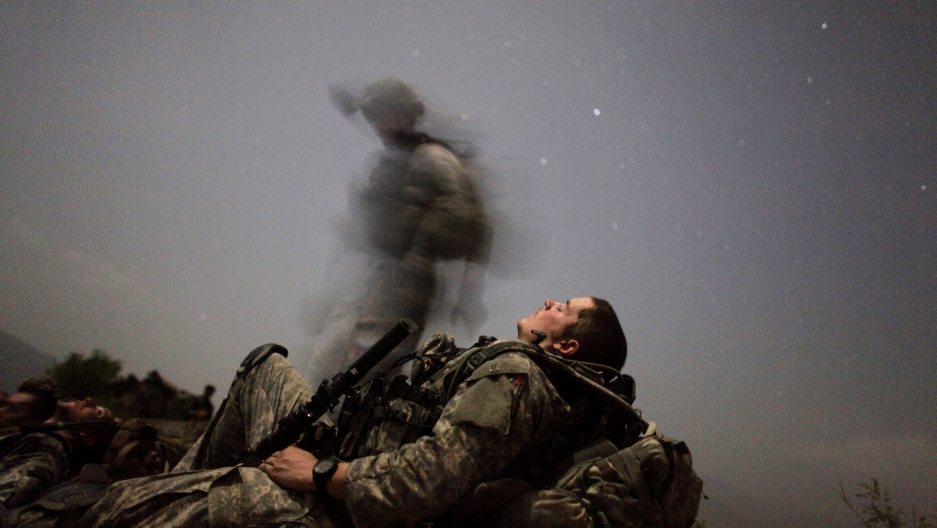 A US soldier of 2-12 Infantry Task Force Mountain Warrior takes a break during a night mission near Honaker Miracle camp at the Pesh valley of Kunar Province.

A proposal to send thousands more troops to Afghanistan is expected to cross President Donald Trump’s desk this week. Several senior administration and military officials are recommending the increase to fight the Taliban and accelerate training and support missions for Afghan forces.

It’s reported military advisers are recommending the US send as many as 5,000 additional troops to Afghanistan.

The commander of US forces in the country, Gen. John Nicholson, gave his assessment that the security situation in Afghanistan was currently a “stalemate” before the Senate back in February. Last week, he told members of Congress that a few thousand additional troops were needed to train and advise Afghan soldiers. The current international force assisting the Afghans is about 13,000 strong and includes about 8,400 Americans.

An Afghan Defense Ministry spokesman told CNN the government supports an increase in American troops, saying the "US must finish terrorism in Afghanistan."

President Trump is expected to announce his plans in Afghanistan before NATO meets on May 25 in Brussels.

The World reached out to our network of US veterans for their opinions on the issue. Here’s what they had to say:

John Hartnett, New York City, New York
“I was a naval aviator from 1996 to 2005. I served in the United States Navy. I flew helicopters and I was part of the initial invasion of Afghanistan in 2001 and 2002. I think that sending more troops is going to help ensure that those people whom we have been supporting over the years can be assured that we will continue to support them. And it also prevents chaos from developing.”

Walt Mills, Dallas, Texas
“I served in the Vietnam era, in the Navy. I have a son who is in the Army currently. He spent 15 months in Afghanistan. He spent one year in Iraq, and a year over in South Korea. Of the three, Iraq and Afghanistan took its largest toll on him. I think the toll is greater than the effects of the benefits that we gained. And I believe that the benefits that we might get from that type of action with boots on the ground are certainly not worth the human and psychological toll that it takes on our troops.”

Jim Bullion, Millis, Massachusetts
“I’m a retired US Army colonel. I served two combat tours in Iraq. And I was also the director of the Pentagon's task force for business and stability operations in Afghanistan charged with helping to strengthen and rebuild the Afghan economy. I think the president's proposed increases in troop strength are way overdue and will help reverse the dramatic deterioration in the security situation in Afghanistan that has been happening over the last two years. The threat is not just to the Afghan people but it's actually a direct threat to the US and our allies. One of the stated goals in the war for Afghanistan was to make sure that it would never again become a base of operations for the export of violent extremism. And yet that's exactly what would happen if we were to again abandon it.”

Joe Hudak, San Diego, California
“I served for three deployments, a total of about two and a half years in Special Forces in the Army. My personal experience is over there — I realize that in special operations we were trying to make a difference, and realistically the confines between our own political leash that we were wearing as well as the different cultures in Afghanistan and the Middle East in general — there was no way that I could see the local people actually coming on board and taking up a banner of Western ideology and the values that America was trying to force-feed. And I don't feel as though my experiences overseas or in the 20 years that I was in Special Operations that there was any real change.”

Darcella Craven, St. Louis, Missouri
“I served in the United States Army from 1988 to 1996 and I was a proud single corps soldier in the military. We are a country that's been at war for 26 years and we don't behave as such here. And here is a person sending our men and women back into harm's way — for what? It's just incredibly mind-numbingly ridiculous. And it just makes me angry.”

Randy St. Clair, Reno, Nevada
“I served in the Persian Gulf War, and also in Southeast Asia. My initial reaction to President Trump sending more troops to Afghanistan was positive. But that was mainly because I know that people like H.R. McMaster, the national security adviser, and Secretary of Defense Jim Mattis, a former Marine Corps general who I have a lot of respect for, are probably going to be either running the operation in that troop buildup and/or advising the president.”

Daniel Lopez, Brookline, New Hampshire
“I served in Afghanistan … for nine months as a medical operations specialist. My initial reaction to President Trump sending more troops to Afghanistan was that I was extremely disappointed. Right now, in Afghanistan, it's not a United States military issue where we need to go out and fight and continuously fight. I served for nine months and I worked extremely hard every day for many long hours, supporting the medical operations, supporting Afghan security forces, and at the same time taking care of myself. But I did not see that our troops were going out finding and looking for insurgents. I didn't see that our troops were working on trying to start battles with the Taliban, or with ISIS now. But what I did see was we were supporting all the logistical, all the ancillary, all the sustainment aspects of Afghanistan. So the Afghan security forces can continue supporting their country and taking full responsibility on what they need to do.”

Are you a veteran? Join our network, which we often turn to for insight into the stories we’re covering, by texting "return" to 69866.