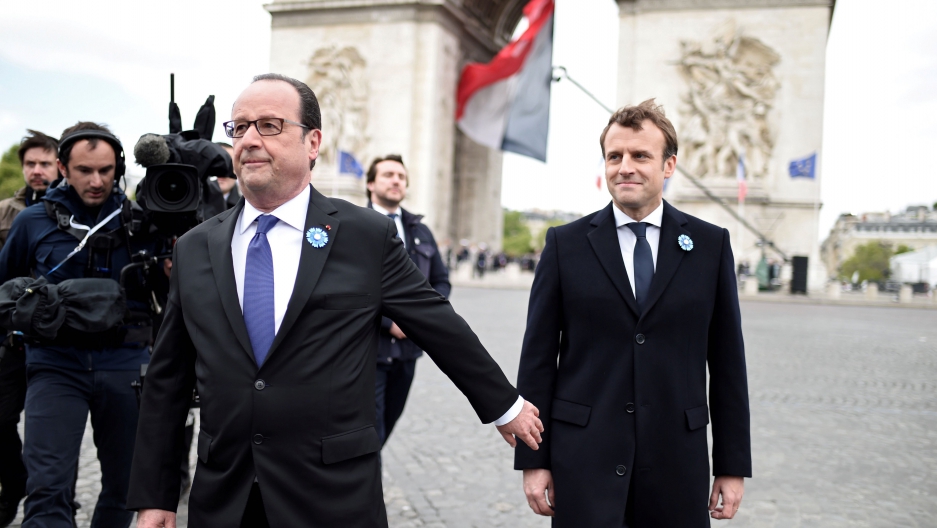 Outgoing French President Francois Hollande (L) and President-elect Emmanuel Macron attend a ceremony to mark the end of World War II at the Tomb of the Unknown Soldier at the Arc de Triomphe in Paris, France, May 8, 2017.

Emmanuel Macron won warm backing from European allies on Monday after his resounding victory in France's presidential election but the focus at home shifted to whether he can govern without a traditional party.

At 39, the former investment banker will become France's youngest-ever president when he is inaugurated next weekend after crushing far-right leader Marine Le Pen on Sunday.

Although the centrist politician faces a huge task ahead to unite a fractured and anxious country, his win has been greeted with relief by EU leaders and financial markets.

The incoming French leader has also agreed to a first meeting with US President Donald Trump, on the margins of a NATO leaders summit in Brussels on May 25, the White House said.

Trump congratulated Macron on his victory during a telephone call on Monday, while German Chancellor Angela Merkel reiterated the importance of the election outcome.

"Emmanuel Macron carries the hopes of millions of French people and also many in Germany and across Europe," she told reporters.

Fervently pro-European Macron is hoping to re-energize the Franco-German engine at the heart of the 28-member bloc, which is seen as critical now that Britain is set to leave.

At Macron's victory party outside the Louvre on Sunday, the classical music lover walked on to the stage to the strains of "Ode to Joy," the anthem of the EU, rather than France's "La Marseillaise," which was saved for the end of his speech.

Final results showed Macron won a higher-than-expected 66.1 percent of the vote against 33.9 percent for Le Pen, which many of her allies view as a disappointment.

It was the third blow for far-right groups in Europe after poorer-than-hoped-for results in the Netherlands and Austria, but many analysts expect them to remain a force because of deep concerns about immigration, identity and globalization.

"Let's not fool ourselves: The score shows that ... there is a real desire for far-right extremism in the population," French historian Nicolas Lebourg told left-leaning newspaper Liberation.

In a sign of their disenchantment with politics, about one-third of the French electorate either abstained or cast blank or spoiled votes.

Despite his clear win, Macron gave a sober victory speech and there was little euphoria Monday, reflecting a gloomy national mood after years of economic malaise and a string of terror attacks since 2015.

And his ambitious reform agenda is likely to face fierce resistance from trade unions and far-left opponents.

On Monday, Macron appeared alongside Socialist President François Hollande at World War II commemorations, a cordial meeting of the once close friends who became estranged when Macron launched his presidential bid last year.

Commentators were already focused on Macron's next battle as part of his planned "revolution" of French politics: parliamentary elections on June 11 and 18.

Macron, Hollande's former economy minister, started his own independent movement En Marche ("On The Move") in April last year but has no party structure behind him.

He faces a huge challenge to forge the working parliamentary majority he will need to push through his reforms.

"It's all well and good running on a ticket of cutting 120,000 public sector jobs, a 60-billion-euro cut in public spending and a lowering of the unemployment rate to 7.0 percent, it will be another getting it through the French parliament," said Michael Hewson, an economist at online trading platform CMC Markets.

Macron aims to ease France's famously rigid labor laws that he believes fuel unemployment and wants to improve education in deprived areas as well as increase welfare protection to the self-employed.

En Marche's 577 candidates will be announced by Thursday. The movement is to be renamed La Republique en Marche ("The Republic on the Move").

One of Macron's other priorities will be to name a prime minister. He said before Sunday's vote he had made his choice but would not reveal the name. He has previously said he would like to appoint a woman.

He will inherit a population worried about the economic impact of globalization and changes to French identity caused by immigration.

Sylvain Crepon, a French sociologist and a leading expert on Le Pen's National Front (FN), said the party "has managed to implant its identity politics across the political spectrum."

Le Pen has signaled her desire to transform her anti-immigration, anti-EU party into the main opposition to Macron, but there were already signs of an internal ideological battle about which direction to take.

"We need to stay faithful ... to the fundamentals of the National Front," Jean-Marie Len Pen, Marine's 88-year-old estranged father and hardline co-founder of the party, said Sunday.

The election underlined France's economic and geographical divisions, with Macron popular among more educated, middle-class voters in cities, but viewed with suspicion or hostility by blue-collar workers.

In the first protest against his policies, several thousand people demonstrated in Paris, chanting "anti-capitalists" as they marched through the capital.

"A majority of people were against Marine Le Pen, and I'm happy about it, but there's not a majority for Mr. Macron's project," a spokesman for far-left presidential candidate Jean-Luc Melenchon, Alexis Corbiere, told LCI TV.

In an early plea for unity, Macron reached out to Le Pen's supporters after their vicious election battle.

"I will do everything I can over the next five years to ensure that people no longer have any reason to vote for extremes," he said.