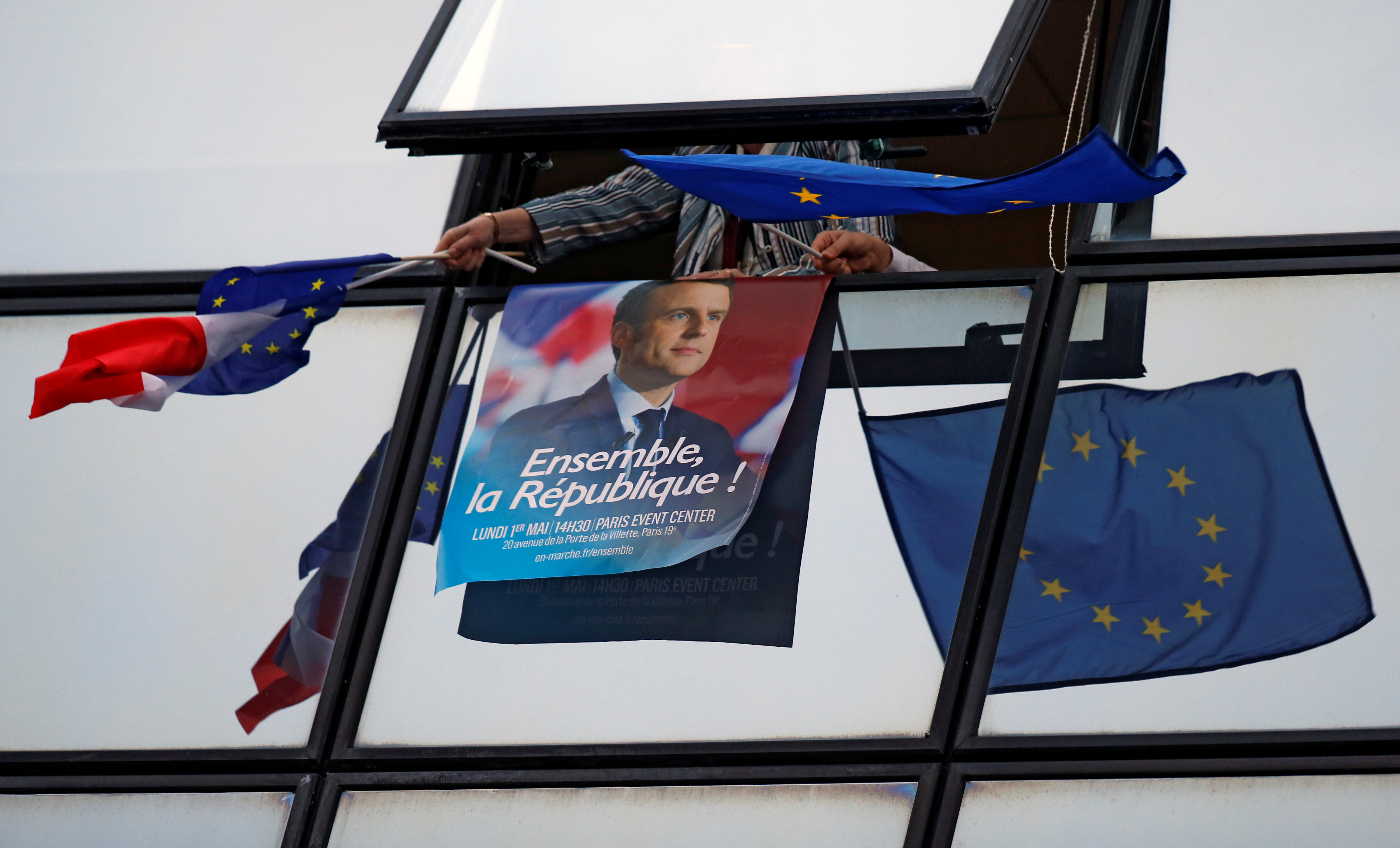 A supporter holds a campaign poster of Emmanuel Macron and European Union flags after results were announced in the second round of 2017 French presidential election at the campaign headquarters in Paris, France, May 7, 2017.

Emmanuel Macron, who exit polls say won France's presidential elections on Sunday, may have seen off the competition in the race for the Elysee Palace but will face daunting challenges when he takes office.

The 39-year-old must unite a deeply-divided country, roll back unemployment and try to nudge a fractious EU along the path of reform -- but he first faces a battle to secure a governing majority in legislative elections due next month.

Macron, a pro-European centrist and former banker, takes over a divided country where nearly half of voters backed extremist candidates -- critical of the EU, globalisation and "elites" -- in the first round of the election.

The "two Frances" are divided geographically -- one urban, more affluent and open to reform; the other, concentrated in the northern rustbelt and in disadvantaged areas of the countryside. It was this latter France that voted for Macron's far-right opponent, Marine Le Pen.

Macron knows that many voters backed him not out of conviction but simply to stop Le Pen taking power, and his support could evaporate at the parliamentary elections.

"Will the Macron-Le Pen divide -- which is a national, existential identity divide, not the usual left-right split -- continue into the legislative election? I tend to think so," said analyst Stephane Rozes of the CAP thinktank.

Macron has promised to move beyond traditional left and right parties to create a new majority in the centre.

He launched his En Marche! (On the Move) party less than a year ago but managed to attract hundreds of thousands of supporters. He finished first in the first round of the election with a quarter of the vote. In the runoff against Le Pen, he notched up almost two-thirds of the vote, according to exit polls.

Now he must convert his extraordinary rise -- unprecedented in recent French history -- into a solid presence in the National Assembly.

After his success in the presidential race, Macron believes that the French people will give him another victory in parliamentary elections, which will take place on June and 18.

But the traditional centre-right, whose candidate Francois Fillon crashed out in the first round amid a fake jobs scandal, hopes to strike back and force Macron into a coalition arrangement in parliament.

The far left, emboldened by the first-round success of candidate Jean-Luc Melenchon, who took an unexpectedly high 19.6 percent, is also aiming for a strong showing.

Macron has lamented France's failure to solve its unemployment problem.

French joblessness runs at 10 percent, which compares with an average of 8.0 percent across the EU and just 3.9 percent in neighbouring Germany.

Like his predecessors, Macron will be judged above all on employment, and he has vowed to force through reform of France's hidebound labour laws using executive orders during his first months in office.

This accelerated procedure, bypassing parliament, could mean a fiery start to his term as France's highly activist unions would likely bring protests out onto the streets, as they did last year when Socialist Prime Minister Manuel Valls used the tactic.

The killing of a policeman on the Champs-Elysees in central Paris just three days before the first-round vote was a sobering reminder of the terror threat hanging over France.

More than 230 people have been killed in jihadist attacks in France since January 2015, many carried out in the name of the Islamic State (IS) group.

"IS is open about its desire to smash national cohesion by exacerbating tensions between Muslims and the rest of the population," said Marc Hecker of the French Institute of International Relations.

Hecker pointed to the dangers posed by hundreds of French IS fighters returning home from Syria and Iraq in the coming years.

With no previous experience in such matters, Macron has to move quickly to show he has a grip on these challenges and his role as military commander-in-chief.

General Jean-Paul Palomeros, who advised Macron, predicted that France's military commitments in the Middle East and Africa would continue unchanged.

Macron has also said he wants to reinforce the EU's external borders and has called for a major increase in resources for the Frontex agency.

Macron sees a reinvigoration of the France-Germany alliance as crucial to relaunching the EU after the shocks of Brexit and the migrant crisis.

He plans to tour European capitals during his first months in charge to set out a "five-year roadmap to give the eurozone a true budget and to create a Europe of 27 for the environment, industry and managing migration".

Vincenzo Scarpetta, analyst at Open Europe, warned Macron may be biting off more than he can chew.

"Reforming the EU looks good on paper but Macron's ideas are bold: he wants a budget for the eurozone and a eurozone minister. Is that really realistic, when it would require treaty changes?" Scarpetta said.

Macron has also said he is determined to develop European defence by coordinating operations and industrial programmes in this area.