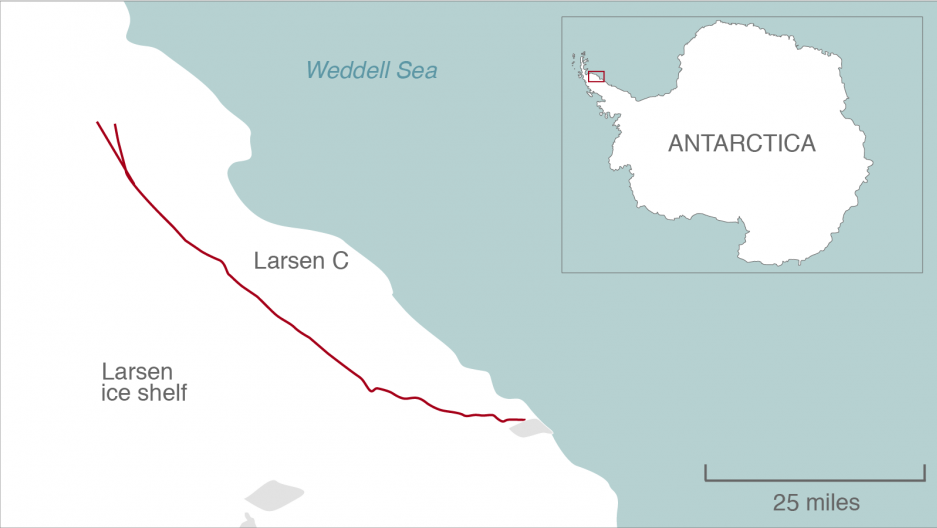 A branch has formed on a 110-mile rift that is creeping across the Larsen Ice Shelf in Antarctica. Source: Project MIDAS

A new branch was spotted this week in a massive crack on an Antarctic ice shelf, reopening the question of when a Delaware-sized piece of ice will break off and float away to sea.

The roughly 110-mile rift in the Antarctic Peninsula’s Larsen C ice shelf has been relatively quiet for the past few months, leading scientists to believe it may not calve off for several months.

“It’s winter in Antarctica so nobody thought that we would see any further developments of the rift, but obviously we were wrong,” said Heidi Sevestre, a member of the Project Midas research team that’s been watching the rift grow over the past few years.

This week, scientists spotted a new branch in the fracture, running roughly perpendicular to the existing rift and heading toward the surrounding Weddell Sea.

It was the first significant change to the rift since February, researchers say, detected by radar from Sentinel-1 satellites.

“Although the rift length has been static for several months, it has been steadily widening, at rates in excess of a meter per day,” wrote Project Midas investigators Adrian Luckman and Martin O’Leary in a blog post this week.

“This widening has increased noticeably since the development of the new branch, as can be seen in measurements of the ice flow velocity.”

Although ice in Antarctica has been melting and thinning due to climate change, the investigators say this particular crack probably started naturally.

Watch the rift grow across the Larsen C. It is now more than 110 miles long. (Source: Project MIDAS)

The formation of the new branch once again raises the question of when the iceberg will calve.

“It might be very, very quick, or it might still take a few months, we don’t know,” Sevestre said.

When the iceberg calves, Larsen C will lose about 10 percent of its area. The massive chunk of ice is already floating on top of the water, so when it breaks off, it won’t cause a rise in sea level.

But the break could destabilize the rest of the ice shelf.

“Ice shelves like the ice shelf on the Larsen C hold back the ice in glaciers that are flowing down out of the mountains and across the coast and into the ocean all around Antarctica,” said Mark Fahnestock, a glaciologist at the University of Alaska.

These ice shelves act as barriers that slow down land-based glaciers — those which can contribute to global sea level rise.

Back in 2002, an ice shelf to the north of Larsen C, called Larsen B, collapsed and broke into an armada of icebergs in just over a month.

“You could not believe it. Nobody could believe that this didn’t happen for 10,000 years, [and] it happened in a few weeks or a few days,” scientist Pedro Svarka recently told the BBC Witness program.

After the collapse, upstream glaciers started moving much faster.

Today, there’s a big debate among scientists over whether this new iceberg will trigger a similar massive collapse, or whether it’s merely a periodic calving event.

Christopher Shuman, a University of Maryland, Baltimore County researcher at NASA's Goddard Space Center, believes it likely is a signal of larger change.

“This is probably a sign of the same kind of changes that we have seen in the ice shelves farther north,” Shuman said, adding that it follows a pattern that’s been happening along the east coast of the Antarctic peninsula for years.

“First there are smaller losses that set up larger losses within a decade or so,” Shuman said. “Will it be a decade or so for the Larsen C? We’re going to have to watch to find out.”

Scientists are watching, and new tools are showing them more than ever before.

Higher-resolution imagery and radar have allowed them to track the trajectory of the crack and study the flows of ice that make up the Larsen C ice shelf even on cloudy days.

“These tools are really redefining our understanding on these ice shelves,” Sevestre said from her office at the University of St. Andrews in Scotland.

“What we’re seeing now is that truly, these ice shelves are reacting much, much faster to climate change than we thought.”

A study published in the journal Nature in March posited new estimates for sea levels by the end of the century that nearly doubled previous predictions. The main reason? Ice melt in Antarctica.

“The more our knowledge is improving, the more our understanding is getting better and better, kind of the more worried we are getting looking at these ice shelves,” Sevestre said.

Personally, Sevestre says she’s actually less worried about the Larsen C ice shelf than she once was.

The larger shelf has remained stable over the past few months even as its massive crack has widened, giving Sevestre hope that it may not collapse and dissolve in the manner of Larsen B.