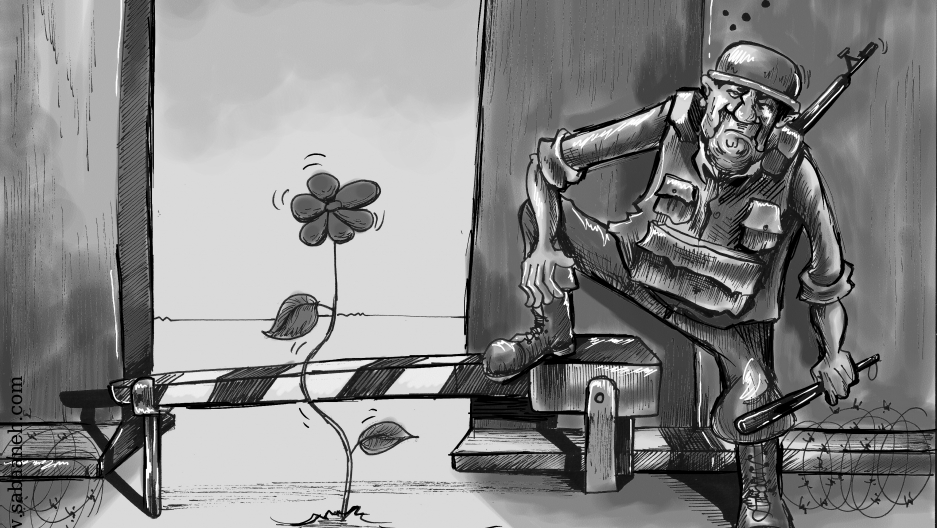 "Most people say the 'Palestinian and Israeli conflict,'" he says. "It's not accurate. It's not a conflict. It's an occupation." 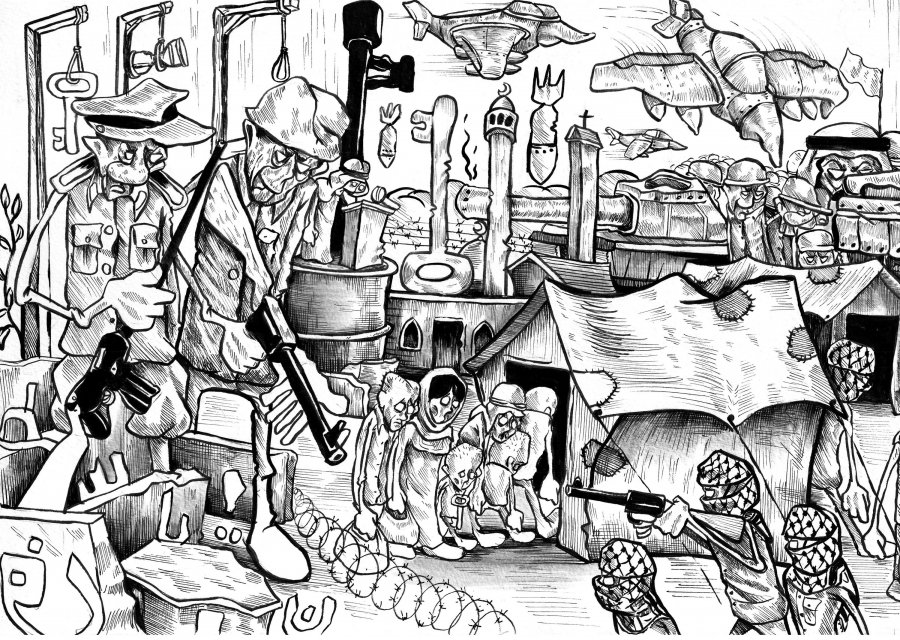 Sabaaneh's new book is "White and Black: Political Cartoons from Palestine." The title is partly a reference to the Israeli occupation of Palestinian lands.

His new book is a call for people around the world to understand how the Israeli occupation restricts and diminishes the daily lives of Palestinians.

"You can't imagine that if you want to go from your home to your family's home, you may spend seven hours just to reach your family home, when it should be just one hour," Sabaaneh says. 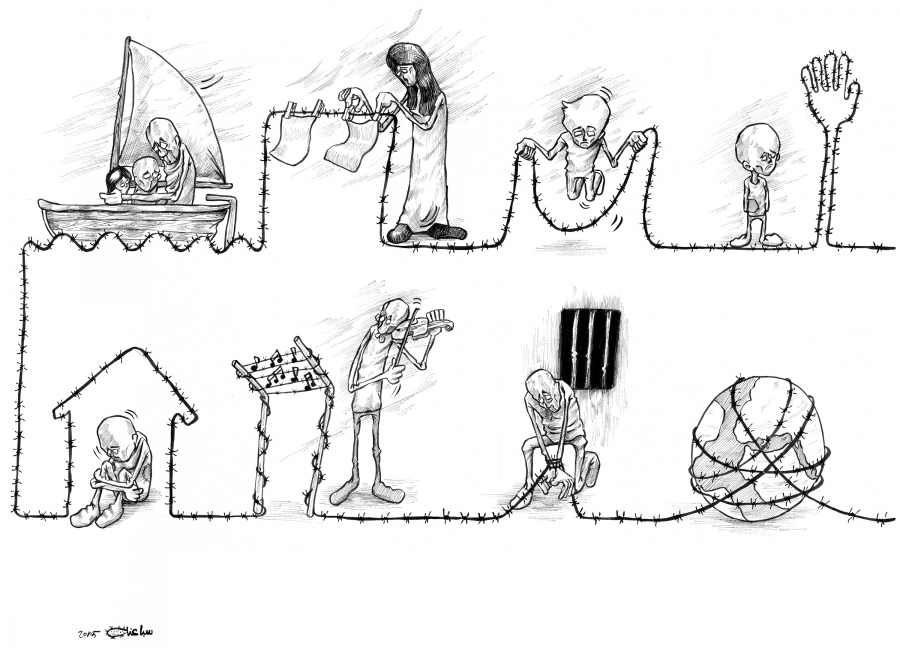 The Israeli West Bank wall is more than just a border for the Israeli state. It affects Palestinians' ability to live normal lives, like visiting family, going to university or, in Sabaaneh's case, getting a visa to visit the United States for his book tour. He had to go to Amman, Jordan, for a visa interview because he can't travel to Jerusalem.

"All of these political decisions have a bad impact on all Palestinian life," he says. "And this is what I want to convey in this book.

In Sabaaneh's cartoons, Palestinians live their lives in small spaces. It's crowded. Everybody's in your business. Israeli soldiers look on.

In 2013 Israeli authorities detained Sabaaneh, charging him with being linked to a terrorist group. He was held in Israeli prison for five months before being acquitted and released. He spent two weeks of his detention in solitary confinement. The experience changed Sabaaneh and also changed how he depicts Palestinian prisoners in his cartoons.

"Most of the cartoonists and artists in the Arab world want to show Palestinian martyrs and prisoners like a hero, like a superman," he says. "This is something I did not feel when I was in the prison."

Sabaaneh says in prison all he wanted was to feel was human again. He craved the ordinary things like seeing his wife and daughter, visiting with friends and doing his artwork. "I did not feel like superman inside the prison." 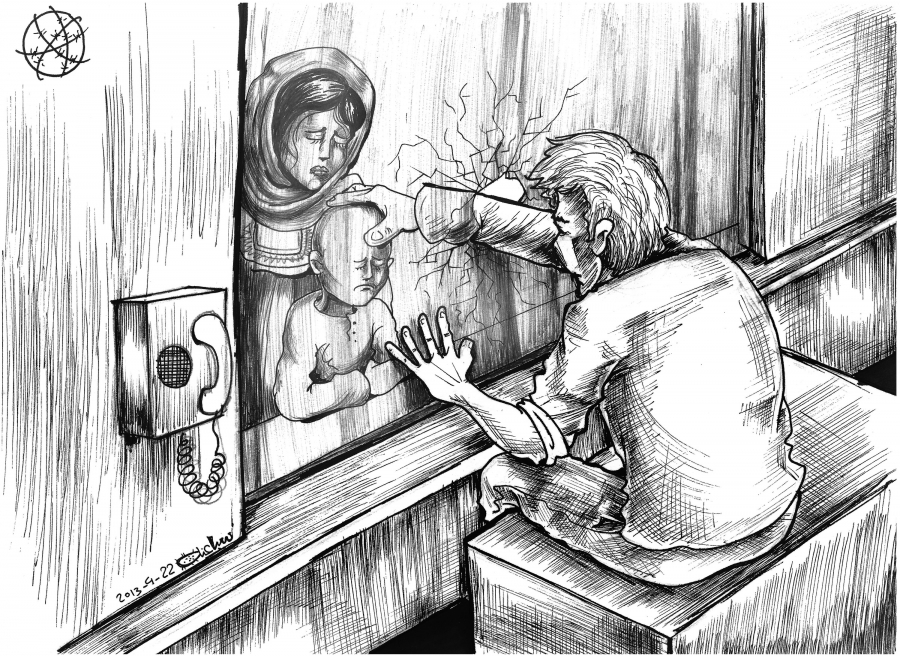 Sabaaneh says to keep his mind active while in solitary, he imagined himself a journalist on assignment to find out what life is like for Palestinian prisoners. He took mental notes, managed to steal a piece of paper and a pencil during an interrogation, and made a list of the cartoons he would draw once he was out.

Once he was released, he drew those cartoons. Many of them are in his new book.

Sabaaneh believes he was detained because of his cartoons. He says the Israeli government cracks down on Palestinians who use art to oppose occupation.

"Even two months ago, when I was coming back from Amman, [Jordan], they stopped me for around five hours because they saw my sketch book," he says. "And they keep asking, 'Why are you drawing these cartoons? Why are you drawing the Israeli soldier?' It was something ridiculous to stop anyone, just because of his art." 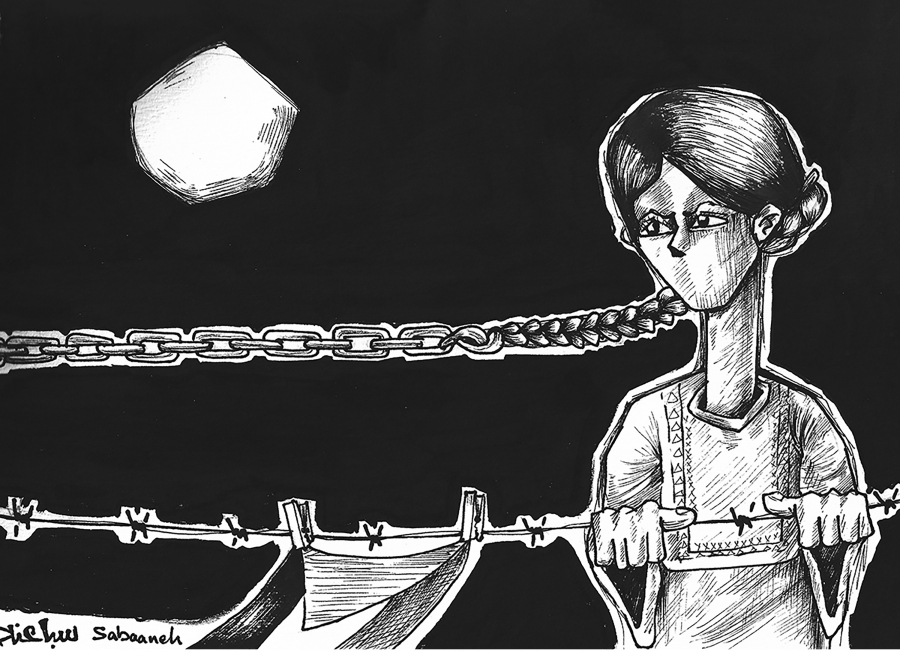 As for the future, Sabaaneh says Palestinians just want to live.

"It's not just a political process," he says. "I want [people] to know that Palestinians are not just demanding their state because they want to raise their flag on it and have ambassadors and embassies around the world. They want to live as a human being. That's it!"