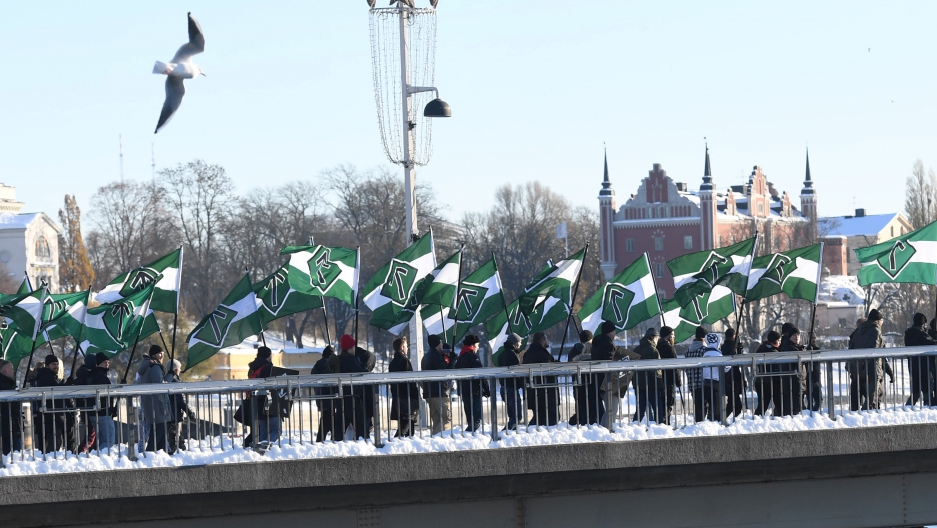 Sweden is one of the Scandinavian countries lauded as a bastion of progressive society: gender equity, universal health care and education, low crime rates. But even in Ikea's homeland, white nationalism is not new.

For decades, nativist groups have lived on the margins of Swedish politics, and in the 1990s, Sweden "was the largest producer of what's known as white power heavy metal," says BuzzFeed News' Lester Feder. "In Sweden, something like 20 percent of teenage boys heard that music when it was popular in the '90s and early 2000s, so that is a huge part of [Swedish] culture, despite the fact that it has this very progressive reputation."

Feder has been reporting on far-right extremist groups in Sweden, and recently published a piece about some of these groups' partnering with American white nationalist Richard Spencer. Spencer coined the term "alt-right" and made headlines last year during the presdiential campaign.

He's known for leading a Hitlerian salute of then-newly elected President Donald Trump, and later for being punched in the face by protesters at the president's inauguration.

In partnership with Swedish far-right groups, Spencer has launched the AltRight Corporation, the goal of which is to create a "more ideological Breitbart," says Feder. Breitbart is the far-right publication previously helmed by Trump chief strategist Steve Bannon.

"The idea being that Breitbart has captured a large sector of readers on the right, particularly being anti-immigration," Feder says. "Their goal is to make that more specifically about protecting whiteness. Spencer says that he wants to help create a consciousness that will make possible the creation of what he calls an 'ethno-state' that will be for Europeans and people of European descent."

Feder says it's not a stretch for Swedish extremist groups to welcome Spencer's ideas.

"Sweden has been a surprising capital of white nationalism going back several decades," Feder says. And online message boards have helped people with anti-immigrant ideologies across the world connect. Now, he says, there is a kind of unofficial network of white nationalists.

Feder's colleague Ryan Broderick reported on how this network cooperates, mostly without formal coordination. Feder says "online communities were sort of organizing to support the national front in France ahead of their elections. And those were networks that were active in supporting Trump."

Spencer's new venture is a more formal product of the online community of white nationalists, though Feder says their fervor is fueled by real-world events as well as online validation.

"Things like Brexit, like Trump's victory make immigration critics in a lot of different countries feel like they have a different shot at changing the debate," he says.