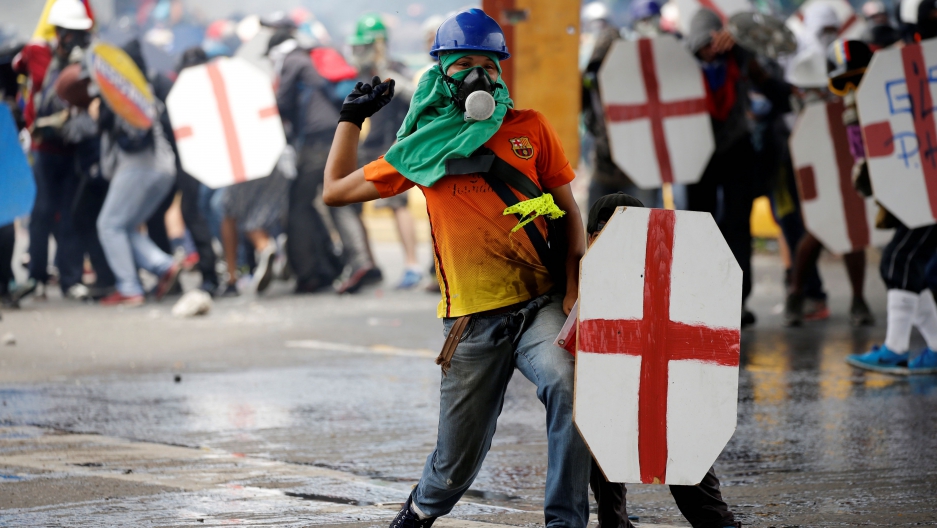 Opposition supporters clash with riot police during a rally against President Nicolas Maduro in Caracas, Venezuela, on May 3, 2017.

They were the latest in more than a month of worsening clashes that prosecutors say have killed 31 people in the oil-rich nation.

The opposition accuses elected President Maduro of maneuvering to strengthen his grip on power. He has for months been resisting calls for a vote on removing him from office.

Street protests are one of the few means the opposition has left to pressure Maduro, who has the public backing of the military.

Clouds of gray smoke from tear gas canisters filled the air as police with riot shields and trucks advanced along a major avenue in the east of the capital.

Protesters at the head of the crowd hurled stones and Molotov cocktails and officers fired tear gas, rubber bullets and water cannons to push them back.

Protesters were inflamed above all by Maduro's latest maneuver against opposition efforts to remove him from power.

The socialist president launched procedures with the electoral council to convene a "constituent assembly" to draw up a new constitution.

His center-right opponents and some international powers said that was a way of dodging elections.

The opposition blames Maduro for an economic crisis that has led to shortages of food, medicine and basic goods.

Maduro says the crisis is the result of a US-backed capitalist conspiracy.

The opposition and some international powers fear the "constituent assembly" is a ploy to avoid regional and local elections this year.

Maduro said it would represent more than just the "bourgeois" voting base of the opposition.

The body would not include political parties with seats in the National Assembly but rather representatives of sectors such as workers, farmers and other communities traditionally loyal to Maduro.

It aims "not to consult with the people, but rather for the ruling party itself to choose so as to have a tailor-made constitution," said Freddy Guevara, deputy speaker of the opposition-controlled National Assembly.

"All dictatorships fall. This pantomime he wants to stage cannot take away our greatest strength: the people in the street."

A presidential election is due to be held next year when Maduro's term ends.

Regional polls were postponed in December and further local ones are due this year, but no date has been set for either.

Private polls indicate that more than 70 percent of people interviewed do not support Maduro, who was elected in 2013 to succeed his late mentor Hugo Chavez.

Maduro accused the opposition of resorting to "extremism."

"They are moving into a phase of armed insurgency. In these grave circumstances, the only way to ensure peace is a constituent assembly."

The past month of protests has shut down many schools and businesses.

The city's once-vibrant nightlife has died due to fears of violence and looting.

Conflicting reports of attacks by government-backed thugs or pro-opposition agitators have sown fear among citizens.

The crisis in Venezuela, which exports most of its oil to the United States, has raised concern in Washington.

A bipartisan group of US senators unveiled legislation Wednesday aimed at punishing Venezuelan officials deemed to be undermining democracy.

The proposed legislation would also provide $10 million in funding for humanitarian aid and $9.5 million to civic groups working to defend human rights.