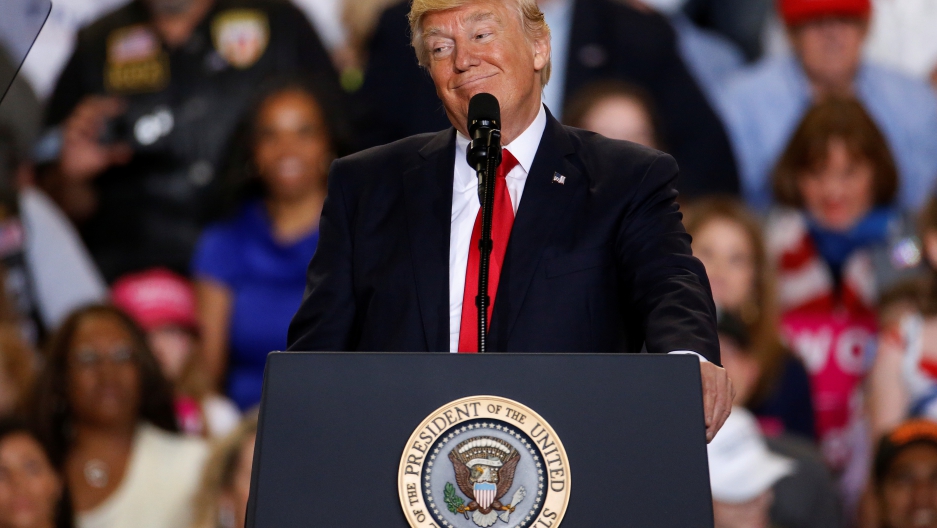 U.S. President Donald Trump on stage at a rally in Harrisburg, Pennsylvania this weekend.

If you were hoping for things to cool off with North Korea in recent days, you've been disappointed. And mixed messaging from the White House might be causing some apprehension.

President Donald Trump told Bloomberg News Monday that he'd be open to meeting North Korean leader Kim Jong Un "under the right circumstances." But Sunday, on CBS's Face the Nation, when the US leader was asked whether he'd consider military action against North Korea he replied: "I don't know. I mean, we'll see."

Trump has been more willing to rattle sabers at North Korea than any recent US president, according to Susan Glasser, the chief international affairs columnist at Politico. Glasser says the tough talk has American adversaries and allies alike asking the same question about the new US leader: "Is he acting crazy like a fox, or just crazy? Are his lies on purpose and strategic, or are they just untruths?"

There's no doubt that the new US president seems to admire many of the world's authoritarian leaders. That fact is not lost on US allies, and it's carefully noted by those who live under the strongmen, according to Glasser.

"Lavishing hospitality, entertainment and words of praise that really matter in their politics to authoritarian leaders like Egypt's [President Abdel Fattah] el-Sisi, I think it marks a stark departure from anything we've seen from any modern president," she says.

Glasser describes the alert level for European leaders gazing across the Atlantic as "extremely high."

"There's nowhere in the world that is both a closer ally and partner of the US and that is more freaked out by Donald Trump than Europe," Glasser says. "Culturally this is the dividing line. It's almost like Blue America versus Red America. Well, Europe is definitely in the camp of Blue America."

Trump is preparing for his first overseas visit later this month. His itinerary is expected to include a NATO summit in Brussels and the G-7 Summit in Sicily, as well as a stop in the UK. European protestors are gathering to greet him.

"The issue that all of these world leaders are asking is: Is Donald Trump unpredictable, or is he just inexperienced and inconsistent?" Glasser asks. "It's amazing that 100 days into the presidency we haven't answered those questions here in the United States, and I don't think his global interlocutors have either."