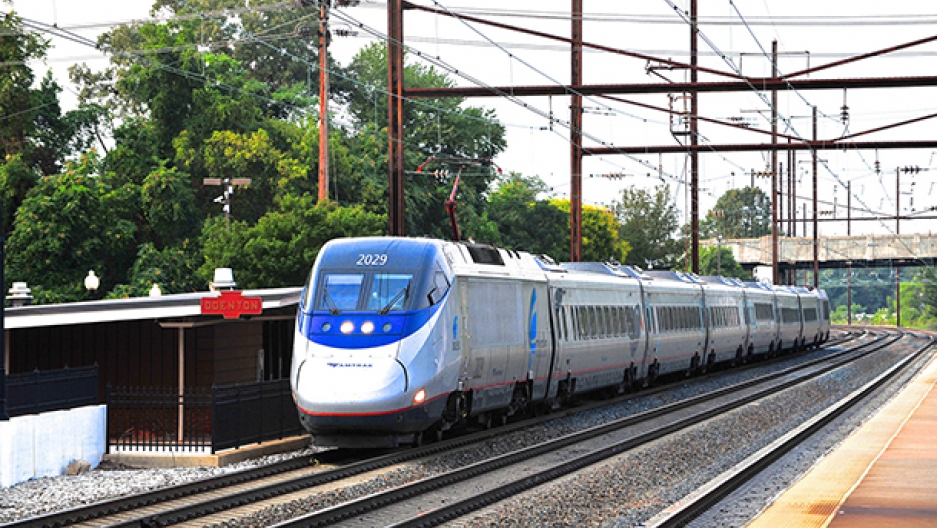 Former Massachusetts Governor Michael Dukakis successfully advocated for the high-speed Acela train, which began running from Boston to Washington in 2000. He wants the US to embrace a nationwide expansion of world-class public transit systems.

Advocates for rebuilding America’s decrepit infrastructure are beginning to worry that the Trump administration will not follow through on its promise to invest $1 trillion in upgrading the nation’s rails, roads, bridges and transit.

“Infrastructure has been conspicuous by its absence in the first couple of months of this administration, and I don't think we have any present prospects for anything serious here,” says former Massachusetts governor and Democratic presidential nominee Michael Dukakis.

Dukakis has been a long-time advocate of public transit and once served as vice chairman of Amtrak. In his view, the state of US infrastructure is “lousy and getting worse.”

“The rest of the world is going right by us,” he says. “High-speed rail, excellent highways. You go to other countries, it's a little embarrassing to come back to the United States. Greece has got an infrastructure that looks a hell of a lot better than ours these days. With all of its problems and all of its struggles economically, [their] highways are in superb shape. The Metro in Athens is remarkable and probably better than any public transportation in any city in the United States — and that’s true all over the world.”

Dukakis says his top priorities for America's infrastructure would include a “first-class, national, high-speed rail system and excellent public transportation — mostly rail-based — in the major cities in this country.” Yet, the recent Trump budget zeroes out funding for Amtrak, which, he says, makes absolutely no sense.

“Amtrak requires less subsidy than any other national rail system,” Dukakis says. “Amtrak makes more of its money from the fare box than any other national rail passenger system in the world. ... About 85 percent of its expenses are paid for by passengers and system revenue. That's pretty remarkable, and I don't think most people understand this.”

Amtrak’s current subsidies pale in comparison to the nation’s highway system, Dukakis points out. Highways in America get over $40 billion dollars in federal funding every year; air transportation gets about $16 billion. Amtrak’s funding is down to a few hundred million dollars.

Dukakis estimates it would take about $100 to $200 billion to begin rebuilding America’s antiquated transportation systems. States are actively involved in developing projects.

As an example, Dukakis points to Los Angeles’ planned Regional Connector, an underground system that will fully integrate and connect the entire Los Angeles transit system. Once this system is linked to other major expansions, LA’s transit system is going to be “one of the most impressive in the country, if not the world,” he says. “It's long overdue, needless to say, because the traffic situation is horrendous.”

“A great deal of this is being financed by local taxes, [but] it is getting some federal assistance. That’s pretty much the way these projects have been financed in the past,” Dukakis explains. “This partnership between the states and the local governments on the one hand and the United States Department of Transportation on the other has worked quite well, as long as the feds are keeping up their side of the bargain.”

Dukakis predicts the Tea Party wing of the GOP will try to block attempts to fund US public transportation, but in the end he believes many projects will have bipartisan support.

“The Tea Partiers for the most part don't represent districts that have major, urban, metropolitan areas. But fortunately there are 50 governors, all of whom are very concerned about transportation, as well,” Dukakis says.

“Do we need a stealth bomber that is going to cost us $300 billion, or might it make more sense to take that money and invest it in this country's infrastructure? I think the question answers itself,” Dukakis says.