Narek Margaryan and Sergey Sargsyan want their fellow Armenians to know that it's OK to make a joke. It's not personal.

The two academics-turned-comedians are the creators, writers and co-anchors of ArmComedy, Armenia's first satirical news program — and yes, it's compared to The Daily Show, like, all the time. Sargsyan says the format took a while to find an audience in Armenia.

"We take things personally. [Armenians] offend easily even if it's a happy joke," he says. "We've been trying to teach people that we are laughing with them, not at them. Even if it's something bad. We don't call some politician stupid. We just show that."

It seems to be working. They now get letters from politicians who ArmComedy has made fun of, offering them material.

Margaryan and Sargsyan aren't doing comedy for comedy's sake. They're using it as a kind of democratic experiment.

"We're actually looking at the news daily and thinking of places where we can improve. And you know, bringing it to light," says Margaryan. "For example, the [capital city's] town hall was spending $30,000 a year on cognac. We thought it's a little bit too much to waste on cognac."

So ArmComedy riffed on it for a while and the cognac budget was cut. "The cognac manufacturers probably don't like us anymore."

Sargsyan says they're using comedy as a form of whistleblowing. "We don't really have the word for whistleblower yet but we're trying to put comedy to use there. So whenever we see too much taxpayer money spent on something we don't like, we just whistleblow about it, bring public attention to it through satire. They get embarrassed and they stop spending money on that."

In another incident ArmComedy exposed deficient public toilets — very expensive public toilets. "About $300,000 was spent on two bio toilets." Margaryan explains: "It's a toilet that's installed on the street. You go and do your business there and then it's somehow transformed into something that's not harmful to the environment. But ours played music so your process is more delightful." 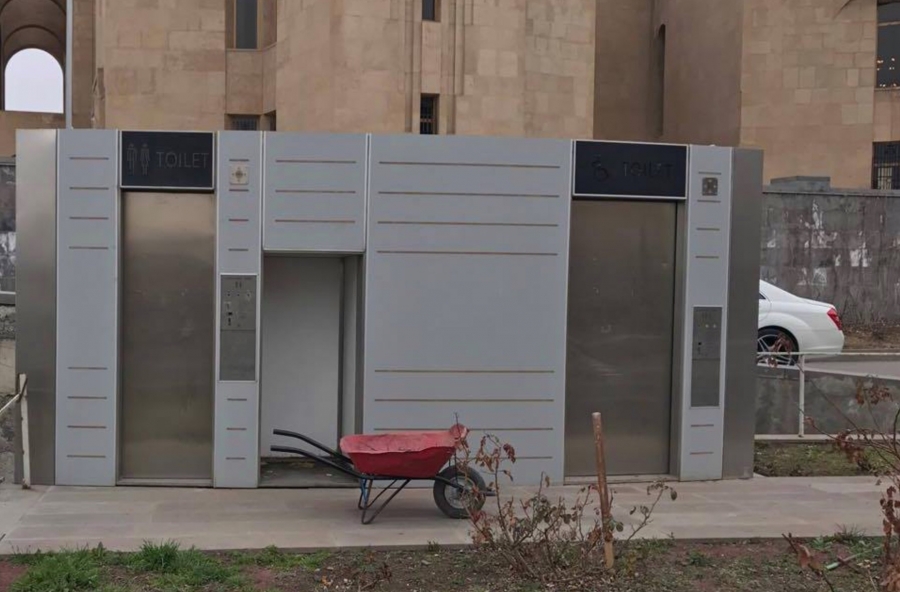 One of the two wco-friendly toilets installed in Armenia's capital, Yeravan. The city spent $300,000 on the toilets, which features music, but neither works.

The idea was to boost tourism to the capital Yerevan by installing a couple of fancy eco-friendly public toilets — to boost tourism by creating infrastructure. "They looked really good. Stunning," says Margaryan. "The problem is, they never worked."

Sargasyan says Armenians have some favorite targets for mischief. "We like to joke about oligarchs, about the new money people and we like to show how ancient we are. We like to exaggerate that too."

Armenia was the first country to adopt Christianity and boasts the world's first church. Armenia has its own alphabet. It's home to the world's oldest winery. Chess is a compulsory subject in Armenian schools. And then there's Kim Kardashian.

"We have a huge history and we're mesmerized by the past. We're, like, always nostalgic and enjoying our great history but now let's build some future, some nice juicy future."

Margaryan says there's one thing you can't joke about in Armenia: "We want Turkey to recognize the Armenian genocide, which for some reason they still haven't 102 years later."

And neither does the US government: "President Trump uses every possible synonym for the word genocide like 'massive massacre.' But they never use that G-word, none of the speeches by the Obama administration or the Trump administration, because they don't want to offend Turkey, for diplomatic reasons."