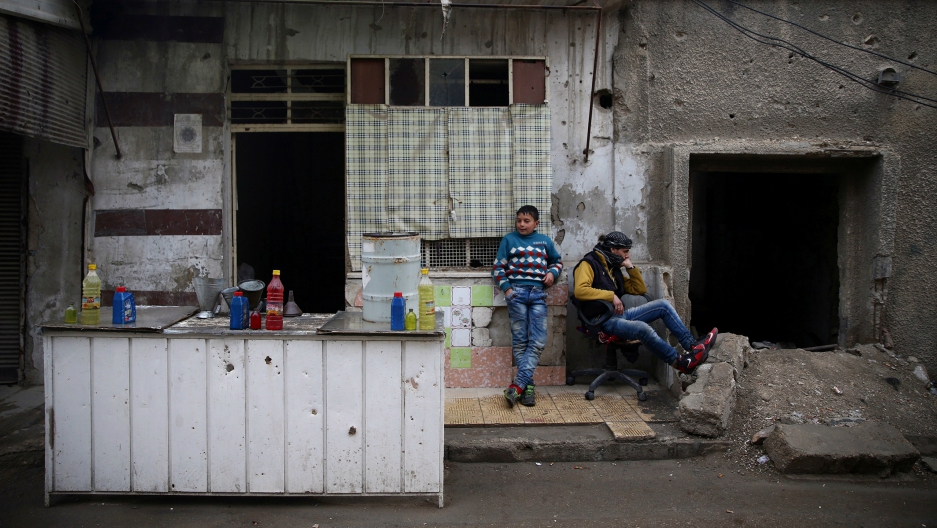 In mid-February, the Syrian regime’s forces launched a military campaign in two areas in and around Damascus, attacking the Qaboun and Barzeh neighborhoods with missiles, artillery and barrel bombs. Despite the relative calm in the neighborhoods over the past three years, and after the fall of Aleppo in December, many were expecting the regime’s attempt to disrupt the area’s relatively stable situation.

The military campaign is aimed at putting pressure on Eastern Ghouta, the last rebel-held enclave in the Damascus suburbs, by targeting the smuggling tunnels that have become vital to survival in the siege economy. The tunnels were dug in 2013, when the Syrian government began its blockade of Eastern Ghouta, and were used to smuggle food and people between the area and Qaboun and Barzeh.

The tunnels have played a vital and strategic role since 2013, and have been at the center of fighting between rebel factions vying to control them. In the recent offensive, government forces encircled Qaboun and Barzeh, effectively cutting off the underground smuggling routes to Eastern Ghouta. As food and supplies quickly ran out, two businessmen have been able to capitalize on the situation. 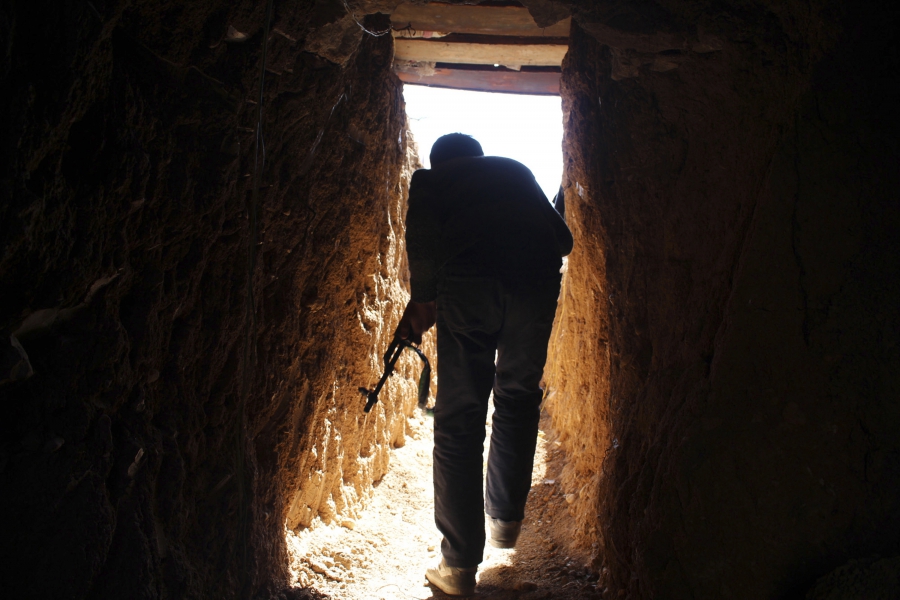 A Free Syrian Army fighter walks through a tunnel on the frontline of Eastern Ghouta, Syria, Feb. 1, 2014.

When Muhie al-Din Manfoush, known as Abu Ayman, a businessman from the town of Misraba in Ghouta, first opened his small company, al-Maraie (The Pastures), the tunnels offered tough competition. However, since the recent military campaign cracking down on them, Manfoush now has a monopoly on the market for all goods that enter Eastern Ghouta from al-Wafidin Camp. However, Manfoush is quite popular within Ghouta because he provides people with financial support. Even before the crackdown on the tunnels, he would buy all dairy and agricultural products produced within Ghouta to be sold in the city of Damascus. In addition to owning a dairy factory, Manfoush provides Ghouta with bread produced in his own bakery.

His goods enter Eastern Ghouta with full cooperation from the regime’s forces, who control all roads leading to the area. Manfoush is believed to be connected to the business empire of Maher al-Assad, the Syrian president’s brother, through businessman Mohammad Hamsho, according to Syrian sources. There is no solid evidence regarding Manfoush’s relationship with Assad, however, Manfoush has an easy relationship with military checkpoints manned by the 4th Division, run by the president’s brother. Additionally, according to sources in his circle, Manfoush visited Russia a few months ago.

However, he also has good relations with the rebels in the area, and “all sides seem to agree that Manfoush has emerged as a major powerbroker in the Eastern Ghouta,” according to a report by the Century Foundation, adding that “he could play a significant role in future truce negotiations between rebels and the government.”

Manfoush wouldn’t be the first powerful businessman to play a role in brokering deals between the warring sides. George Haswani, from the city of Yabroud al-Qalmouniyya, has been a major mediator between the Syrian regime and its opposition, and is known for his role in mediating a deal that freed a group of nuns held by rebels for three months, and for brokering oil deals between the Syrian government and the so-called Islamic State.

Haswani is a businessman, and had trade, oil and energy deals with Russia that predate the war. In November 2015, the US Department of the Treasury’s Office of Foreign Assets Control sanctioned Haswani and HESCO, an engineering and construction company under his control that “operates energy production facilities in Syria, reportedly in areas controlled by ISIL (ISIS),” according to a press release from the US Treasury.

Thus, in the midst of the siege, the bombing, and the fighting in Ghouta, deals worth millions of dollars are being made, and businesses are being built. Additionally, most of the individual and organizational financial aid that reaches Ghouta in US dollars ends up in Manfoush’s pocket, since he is the major source of all goods in the market. 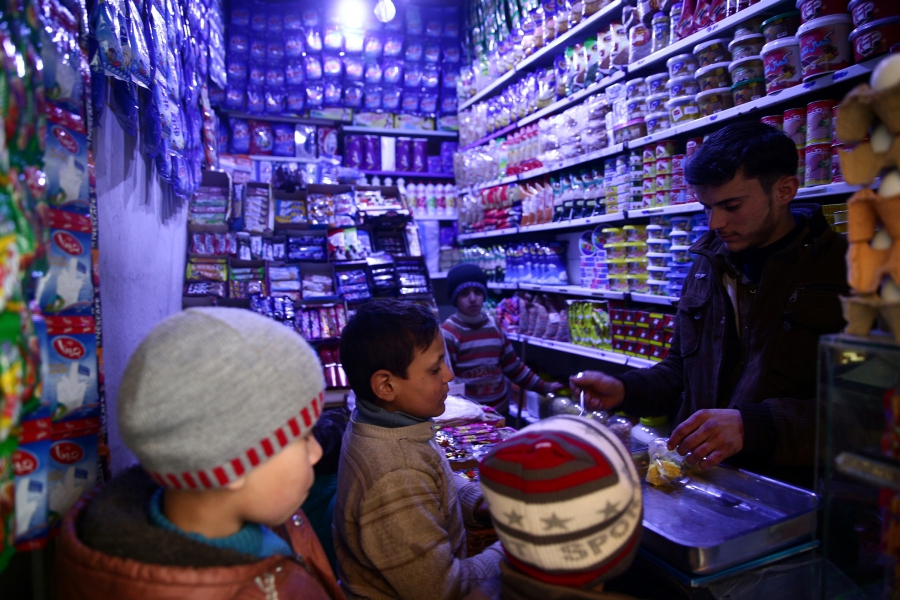 Due to the recent clashes in Qaboun, the tunnels cannot be used to smuggle goods into Eastern Ghouta anymore, which allowed Manfoush to monopolize the market. The UN has repeatedly asked for a cease-fire in Eastern Ghouta to allow in aid to avoid the devastation wrecked in Aleppo not too long ago. An estimated 300,000 people still live in the enclave.

According to Abu Ahmad, an activist in Eastern Ghouta, in the first days following the clashes in Qaboun, Manfoush continued to provide the area with needed goods. However, after the counterattack launched by opposition group Faylaq al-Rahman on Jobar on March 19, Manfoush cut off all supplies to the area. Jobar, a neighborhood on the eastern outskirts of Damascus, is split between armed opposition groups, namely Faylaq al-Rahman, and pro-government forces.

This move led to a dramatic increase in prices, and many merchants reduced the amount of goods in the market to sustain themselves until the situation changes. Up until the writing of this report, it is not clear whether Manfoush will resume supplying the area with goods.

The supplies stopped because the roads Manfoush uses to transport his goods were cut off due to the fighting. Rumors of a new agreement between Manfoush and the Syrian government say the entry of only limited amounts of fuel and electronics are now allowed.

In an official statement, Faylaq al-Rahman announced that the Jobar attack was a response to the attack launched by the Syrian regime on the Jobar, Qaboun and Tishrin neighborhoods. According to observers from within Ghouta, one effect of the conflict may be reconnecting Ghouta and Qaboun through Jobar, which could lead to the reopening of the tunnels, allowing goods to be smuggled in again.

Others believe that even if Faylaq al-Rahman and its affiliates take control of Qaboun and Barzeh, the Syrian regime would impose a blockade on the whole area.

While the tunnels are out of commission, it remains to be seen whether the regime will order Manfoush to completely cut off his supplies to Ghouta — which would likely cause a famine, similar to the situation in Eastern Aleppo — or, since the market in Ghouta represents a revenue stream for the regime, if it will allow supplies to enter the area. The answer to this question will impact the lives of the hundreds of thousands of people living in Eastern Ghouta.

This article originally appeared on Refugees Deeply, and you can find the original here. For important news about the global migration crisis, you can sign up to the Refugees Deeply email list.