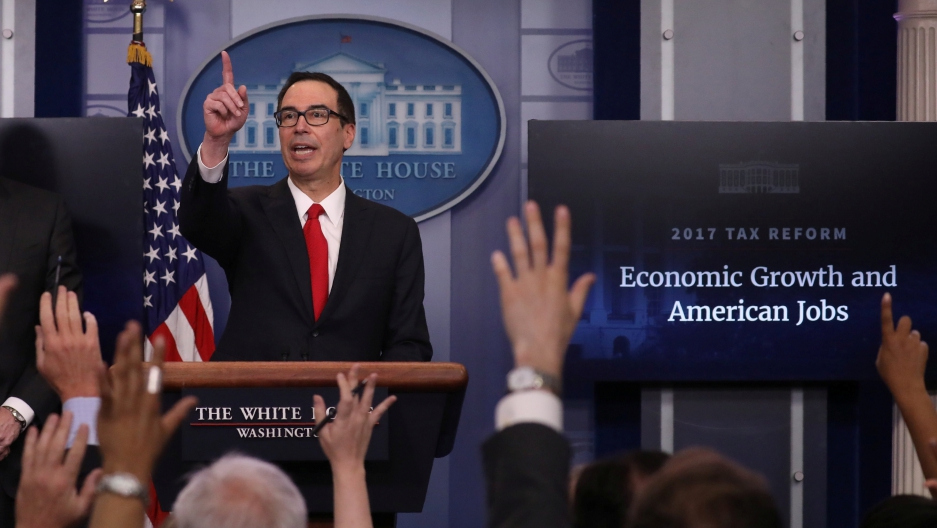 US Secretary of the Treasury Steven Mnuchin discusses the Trump administration's tax reform proposal in the White House briefing room in Washington, on April 26, 2017.

“It’s going to be the biggest tax cut in the history of the country!” That’s how US Treasury Secretary Steven Mnuchin touted the Trump administration’s just-revealed tax plan. But huge cuts mean the government will need to make up the revenue somehow.

James Hines, an economics professor at the University of Michigan, says the United States might want to adopt a value-added tax or VAT.

“More than 170 countries have value-added taxes," Hines says. "Really, the United States is the only country that doesn’t.”

A VAT is a type of national sales tax. In European countries, for instance, it is usually included in an item's price tag. If you’re a foreigner and buy something on vacation, you can usually get a refund on the VAT. A standard VAT rate in countries like Germany, France and the UK is 20 percent. The Organization for Economic Cooperation and Development, the OECD, estimates that other countries get about a third of their tax revenue by taxing consumption through VATs. The US, meanwhile, gets less than 18 percent of its levies through state and local sales taxes.

But the VAT is controversial and therefore, a political nonstarter, Hines says. Some critics call it too "regressive" — meaning it hits everybody at the same rate, regardless of what they can actually afford. Others say it's not visible enough for consumers.

“Democrats think it's not progressive enough because it doesn’t put extra burdens on higher-income people, like an income tax does,” Hines says. “And Republicans worry that it's too easy for the government to raise money with one.”

Many economists, though, think a VAT would be a great idea. “It’s a very efficient and effective way of raising revenue,” Mines says.

And as for the concern that it’s not progressive enough? Hines says the US could adjust the income tax at the same time to offset the relative shifting of the burden between the poor and the rich.

Another policy idea that’s worked well in Denmark, Finland, Norway and Sweden, Hines says, is a dual income tax. This system combines a progressive tax rate on job income — your wages — with a flat tax on capital income like dividends, interests and capital gains.

Hines says a dual tax system might also work in the US because it makes it possible to maintain high tax rates on high-income earners and business owners without also subjecting their capital income to high rates. “Of all forms of income, capital income is the most likely to be discouraged by high tax rates,” Hines explains, “since capital owners can choose how and where to invest their money, whether to sell their investments, and even how much to save, all of which have been shown to respond to tax rates.”

Bottom line? According to this public finance expert, to get real revenue, the US needs to raise taxes on everybody. “Look. It’s not that complicated,” Hines says. “If you want to spend money, you have to raise it with taxes. I get that people don’t like the taxes, but then you’ve got to live with smaller spending. That’s really your choice.”

And the US, Hines says, seems incapable of lowering our spending. “We’re running big deficits,” he says, and “we have looming deficits on the horizon. We have enormous unfunded entitlement liabilities: the Medicare trust fund is scheduled to expire in 2028; social security in 2024. We’re just not paying our bills right now. And I don’t know how you pay your bills without raising tax rates."

So Mnuchin's “biggest tax cut in history?” At least for some economists — maybe not such a good idea.