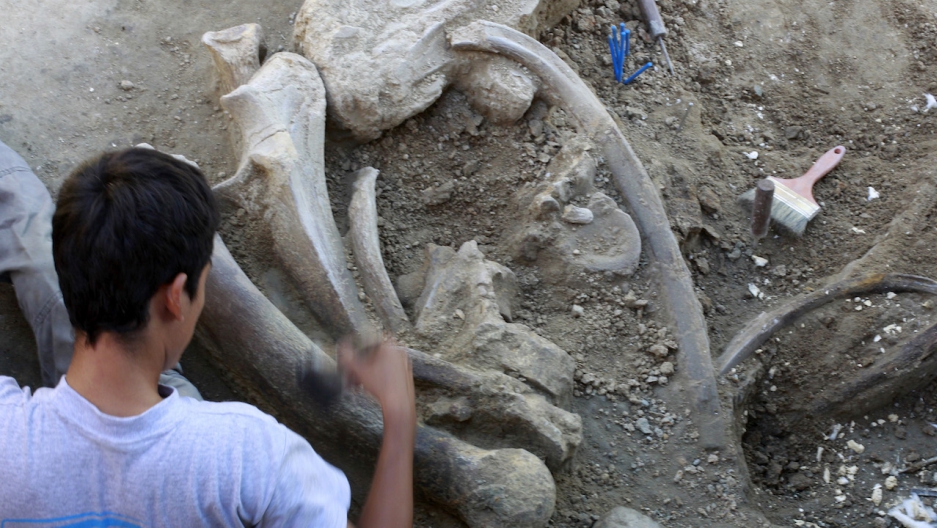 A worker from El Salvador's Natural History Museum brushes away debris from the bones of a mastodon found at a dig site near the capital San Salvador in 2013. Examination of mastodon bones in California in 2017 led to an exciting discovery about human history in the Americas.

High-tech dating of mastodon remains found in southern California has shattered the timeline of human migration to America, pushing the presence of hominins back to 130,000 years ago rather than just 15,000 years, researchers said Wednesday.

Teeth and bones of the elephant-like creature unmistakably modified by human hands, along with stone hammers and anvils, leave no doubt that some species of early human feasted on its carcass, they reported in the journal Nature.

Discovered in 1992 during construction work to expand an expressway, the bone fragments "show clear signs of having been deliberately broken by humans with manual dexterity," said lead author Steve Holen, director of research at the Center for American Paleolithic Research.

Up to now, the earliest confirmed passage of our ancestors into North America took place about 15,000 years ago. These were modern humans — Homo sapiens — that probably crossed from Siberia into what is today Alaska, by land or along the coast.

There have been several other claims of an even earlier bipedal footprint on the continent, but none would take that timeline back further than 50,000 years, and all remain sharply contested.

The absence of human remains at the California site throws wide open the question of who these mysterious hunters were, as well as when — and how — they arrived on American shores.

One possibility that can be excluded with high confidence is that they were like us. Homo sapiens, experts say, did not exit Africa until about 80,000 to 100,000 years ago.

But that still leaves a wide range of candidates, including several other hominin species that roamed Eurasia 130,000 years ago, the authors said.

They include Homo erectus, whose earliest traces date back nearly two million years; Neanderthals, who fought and co-mingled with modern humans across Europe before dying out some 40,000 years ago; and an enigmatic species called Denisovans, whose DNA survives today in Australian aboriginals.

In a companion analysis, Holen and his team argue that — despite rising seas 130,000 years ago due to an inter-glacial period of warming — the overseas distances to the Americas were within the capacity of human populations at the time.

Intriguingly, in light of the new find, recent studies have also shown a genetic link between present-day Amazonian native Americans and some Asian and Australian peoples.

The picture that emerges "indicates a diverse set of founding populations of the Americas," said Erella Hovers, an anthropologist at Hebrew University of Jerusalem, who did not take part in the new study.

As for the early humans who carved up the bones at the Cerutti Mastodon site in San Diego, named for the paleontologist who discovered it, they likely died out, leaving no genetic trace in modern North Americans, the authors conjectured.

Then, in 2014, co-author James Paces, a researcher with the US Geological Survey, used state-of-the-art radiometric methods to measure traces of natural uranium and its decaying by-products in the mastodon bones, which were still fresh when broken by precise blows from stone hammers.

The prehistoric butchery, he determined, took place 130,000 years ago, give or take 9,400 years, and was may have sought to extract nutritious marrow.

"Since the original discovery, dating technology has advanced to enable us to confirm with further certainty that early humans were here signficantly earlier than commonly accepted," said co-author Thomas Demere, a paleontologist at the San Diego Natural History Museum.

To strengthen the case, researchers set up an experiment to reproduce the stone-age food prep tableau unearthed from "Bed E" of the excavation site.

Using stone hammers and anvils similar to those found, they broke open large elephant bones much in the way pre-historic humans might have done. Certain blows yielded exactly the kind of strike marks, on both the hammers and the bones.

The same patterns, further tests showed, could not have emerged from natural wear-and-tear, or from the deliberate crafting of the tools, called flaking.

"This is a very old technology," said Holen. "We have people in Africa 1.5 million years ago breaking up elephant limb bones in this pattern, and as humans moved out of Africa and across the world they took this type of technology with them."

There remain nonetheless big holes in the narrative of human migration to the Americas, Hovers said, commenting in Nature.

"Time will tell whether this evidence will bring a paradigm change in our understanding of hominin dispersal and colonisation throughout the world, including in what now seems to be a not-so-new New World," she wrote.