Nancy Bailey, before she was arrested, with Guatemalan children from her school

Courtesy of the Bailey family

A controversial child trafficking trial starts this Thursday for a 64-year-old American woman who throughout the late 1990s and early 2000s placed hundreds of Guatemalan children with American families. If convicted, she could face more than a decade in prison.

Nancy Bailey of northern California founded and ran Semillas de Amor, Seeds of Love, a home for children. She arranged hundreds of adoptions between 1997 and 2013, and adopted two Guatemalan daughters herself. She rode a wave of popularity in foreign adoptions worldwide. At the time, Guatemala ranked as the second most popular country for foreign adoptions after China.

However, widespread corruption and allegations of kidnapping drove the country to outlaw foreign adoptions in 2007. Semillas was raided several times, and a warrant was issued for Bailey's arrest. In late 2014 she was arrested, and she has been in jail since October 2016.

“[Prison] is too dangerous to be fearful,” Bailey said in a phone interview. She said the prison is overcrowded and she shares a cell with three, four or five other women, most of them gang members.  Bailey said she suffers from health issues, and has been hospitalized repeatedly.  “I’m friendly to people and I stay to myself a lot. I try to not create any kind of problems. The only way of coping is by really trying not to think about it,” she said.

As her trial approaches, her family and friends are launching a Facebook campaign to pressure the US government to intervene with Guatemalan officials on her behalf. “Dear Friends, especially FB peeps in CA, please take action NOW and contact your Congressional Reps, Senators, the Secretary of State and President Trump,” one friend posted. “As many of you know, Nancy has dedicated the last 25 years to caring for Guatemala’s most vulnerable…their children! She has been falsely accused of human trafficking”.

However Guatemalan officials intend to tell a different story this week and next as the trial unfolds.

Bailey, they say, was a player in the widespread corruption of the adoption industry in Guatemala that preyed on innocent mothers and babies for profit.  In the decade leading up to Guatemala’s foreign adoption ban, more nearly 30,000 Guatemalan children were adopted. It became a lucrative industry for a poor country — costs for families looking to adopt Guatemalan babies often ran as high as $40,000, an amount which is considered standard in US adoption cases but high for foreign adoptions.

All that cash sloshing around a desperately poor country led to a documented instances of baby-selling and kidnapping. Critics said birth mothers were producing for export. Baby brokers made money from vulnerable parents at both ends of the equation; birth mothers who relinquished children and foreign families who sought to adopt them.

“In Guatemala it was so so easy to manufacture paperwork, identity, pay off a judge, pay off a lawyer,” said investigative reporter Erin Siegal McIntyre who wrote a book, “Finding Fernanda,” on illegal adoptions in Guatemala. “This industry was certainly corrupt to the core.”

Guatemalan prosecutors said Bailey was part of the racket. In 2014 a Guatemalan court ordered Bailey to stand trial on charges taking children and putting them up for illegal adoption for high fees. The prosecutor’s office for human trafficking says the court found sufficient evidence to try Bailey.

Newspaper reports indicate the government plans to argue that Bailey falsified documents in three different adoptions, however requests for comment from the prosecutor's office were denied. Typically, Guatemalan prosecutors are not allowed to speak publicly about a case until after the trial starts.

Bailey said she did nothing illegal, and that a disgruntled former employee set her up. She said critics don’t understand how challenging it was to do adoptions in a country where some birth mothers didn’t have legal identification because their own births were never registered and paperwork was always for sale.

She said she’s unlikely to get a fair trial because “everything to do with international adoption has become criminalized.” She said that the Guatemalan government has made her a scapegoat.

“What they tried to do is build their reputations and their promotions on me being an American and a human trafficker,” Bailey said. 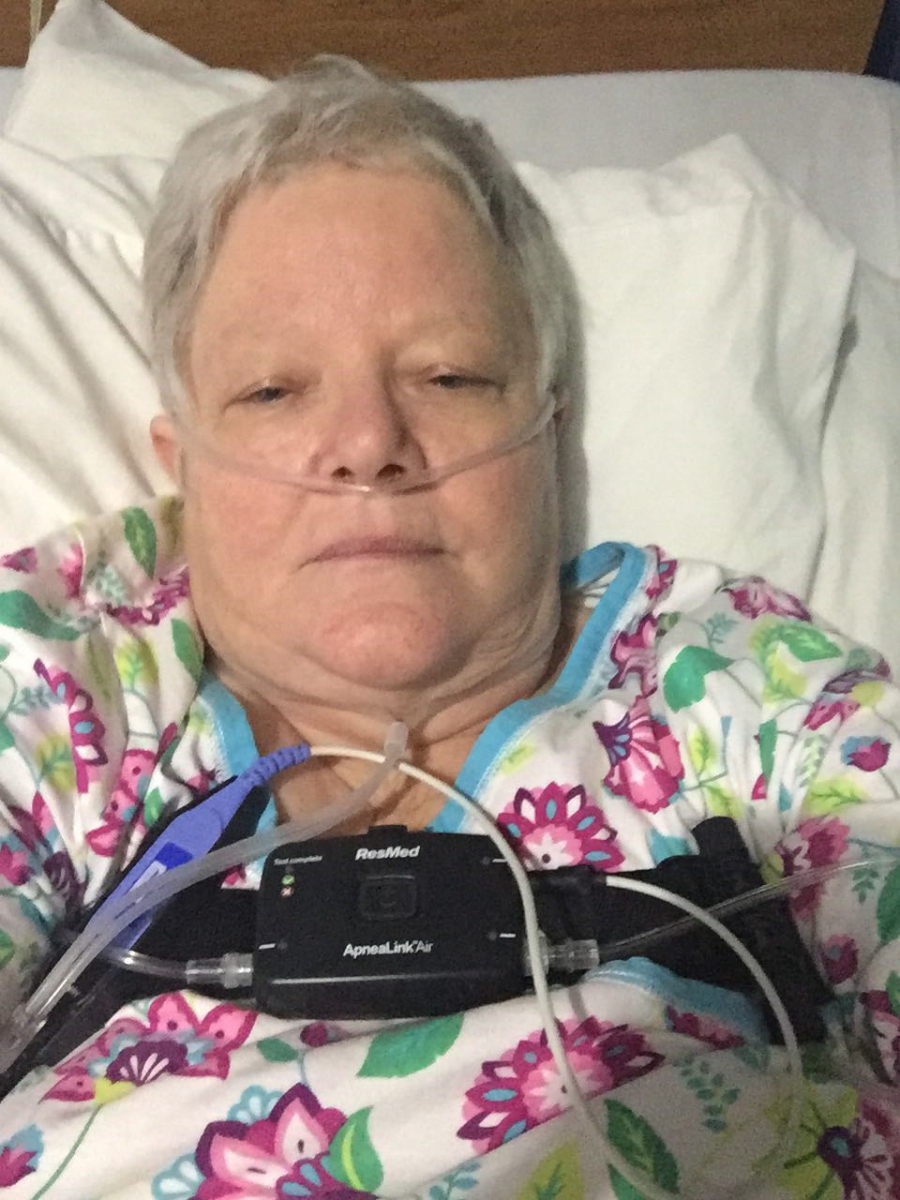 Nancy Bailey, 64, has been in and out of hospital since she was arrested

Courtesy of the Bailey family

Over a distant phone line from her prison, just days before her trial, Bailey told PRI her story.

She first visited Guatemala in the early 1990s — she was in her late 30s, was raising two sons as a single mom, and had a career in employee relations. She began volunteering at a Catholic orphanage in the western highlands, but her involvement grew quickly when she started a school inside the orphanage.

She says a man showed up at her door one day with an infant, saying the mother had died and he couldn’t take care of her. She decided to adopt her, and call her Gaby. She then started her own children’s home in Guatemala, so her daughter could “grow up in her own country.” Bailey said she wanted it to be a nurturing place for children whether they were adoptable or not. She called it Semillas de Amor, Seeds of Love. She hired staff and bought the children nice toys and good food. Older kids took the bus to an international school. Bailey started saving to buy property.

Word about Semillas spread — the need was massive. Guatemala is a desperately poor country with the highest birth rate and highest child malnutrition rate in Latin America. Nearly half of Guatemalans live below the poverty line, and 20 percent, mostly rural indigenous people, live in extreme poverty.

Bailey found babies who’d been left in baskets at the gate. Social workers brought her children who were HIV positive.  She took older children, sibling groups and kids with special needs. She said she never turned any child away. She could afford to take care of them because some of the kids were in the adoption pipeline, and prospective parents paid her monthly foster care fees.

“The children that were able to be adopted paid for those kids that either were going to have to wait a long time or were never going to be adopted,” Bailey said.

Eventually Bailey started facilitating adoptions herself. She recognizes the process was not always professional, but she says that's just part of the reality in Guatemala. She says the demands for paperwork and documents verifying the baby’s birth are unrealistic in a country where many women give birth outside hospitals, and maternal deaths go undocumented.

Bailey acknowledges the industry became problematic. Demand for children grew, and a black market arose to meet the need. Lurid stories spread quickly, some verified and others not, of traffickers stealing children off the streets, tricking new mothers into giving up their babies, and even impregnating women with the sole intention of selling their babies. Bailey says she was asked to pay bribes, but always refused.

UNICEF documented widespread abuse, saying in a 2014 report that the shutdown of foreign adoptions was justified because “if the system in place cannot safeguard [childrens’] rights and best interests, the risk involved in continuing adoptions under such a system is too high.”

After the shutdown, a new Guatemalan agency was set up to promote domestic adoption and help birth mothers find ways to keep their babies. It has been finding homes for about 200 children a year.

“Now the rights of the child come first,” said Rudy Zepeda, spokesperson for the Consejo Nacionales de Adociones. “Guatemala is looking for families for children; not children for families like before.”

However, the shutdown left thousands of kids in limbo, and has shifted the burden of caring for them onto an already poor country that struggles to accommodate them. This problem was highlighted in a most tragic way last month when a fire at a children’s home killed 40 teenage girls, many of them reportedly locked in a school room. The tragedy has raised questions about Guatemala’s ability to care for its young people. Some of those children could have been adopted.

Child trafficking is also on the rise. A 2014 report suggested 30,000 children may be caught up in a $1.6 billion sex trade. While there’s no direct evidence that children are being neglected who otherwise would have been adopted, many say the ban has deprived children of life-changing opportunities.

“Zero tolerance for adoption abuses may sound good but it will hurt children,” says Elizabeth Bartholet, a professor at Harvard School of Law, who wrote a 2010 report titled International Adoption: The Human Rights Position. “The evils involved in such abuses must be weighed against the far more significant evils involved in denying children homes.”

Bailey’s trial is set to last six to 10 days.

Maria Martin from Antigua, Guatemala contributed to this report.