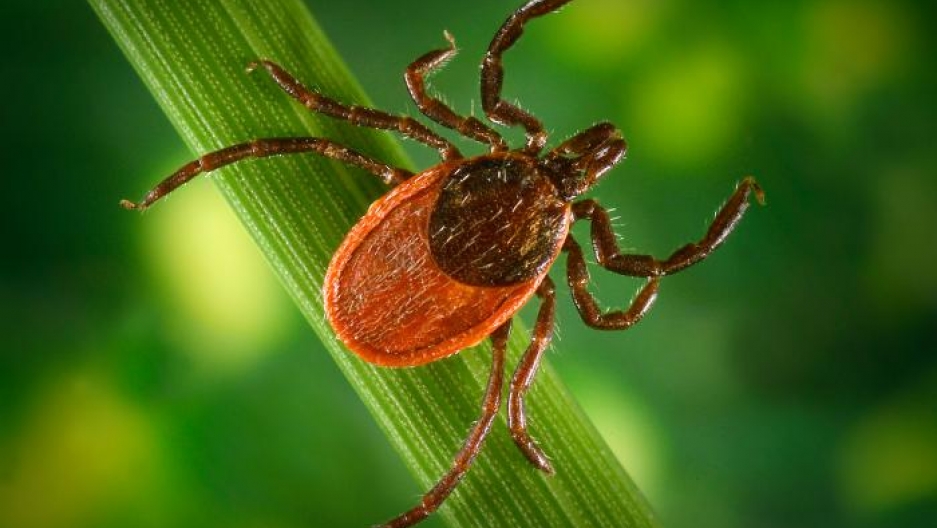 This is the western blacklegged tick (Ixodes pacificus), which spreads Lyme disease on the West Coast of the United States.

Spring is here, so here’s a quick test: How much do you know about Lyme disease, that tick-borne scourge?

Transmitted in the United States by tiny blacklegged ticks, Lyme can initially cause fatigue and flulike symptoms — and later on, even arthritis or short-term memory loss. But if you think that Lyme always arrives with a bull's-eye rash, read on.

“Actually, the majority of the skin lesions are uniformly round and red,” says John Aucott, director of the Lyme Disease Clinical Research Center at Johns Hopkins School of Medicine.

“They don't have that ring-within-a-ring, 'Target department store' look to them. People often mistake them for spider bites because they're just round or oval and red, sometimes even bluish red.”

He explains that Lyme disease can be tricky to diagnose because its symptoms don’t always resemble the pictures in textbooks — and many people don’t see the tick that infected them.

“The tick is about the size of a pinhead — the nymph stage that are feeding in the spring and summer,” Aucott explains. “So [for] most people, it's actually easier to feel them than to see them.”

That Lyme always causes a bull's-eye isn’t the common misconception about the disease. Have you heard, for example, that ticks usually get Lyme from deer? The idea has spurred deer culls to slow the spread of Lyme in areas like central New York, but the problem isn’t that simple.

“Different host species — it could be a mouse or a squirrel or a chipmunk or a fox — each of those different species has a different probability of transmitting the Lyme bacterium to the feeding tick, says Felicia Keesing, a biologist at Bard College. “The host that's best at doing that is the white-footed mouse, by far.”

“About 90 percent of ticks that feed on a white-footed mouse will pick up the infection. But deer really don't transmit the Lyme bacterium at all.”

Our lack of knowledge about Lyme is dangerous, given its prevalence. According to the Centers for Disease Control and Prevention, roughly 300,000 Americans are diagnosed with Lyme disease each year, making it the most commonly reported vector-borne illness in the country. States like New York, Connecticut, Minnesota and Massachusetts have been suffering through local epidemics for decades.

For experts like Keesing and Aucott, the key to fighting the disease is educating citizens and doctors about Lyme transmission and symptoms. That can be a challenge because, as Aucott points out, the disease — first identified in Connecticut in the 1970s — moves into new areas of the country each year, changing the learning curve.

“As it moves south and north, each new area each year is kind of new to the disease,” he says. “It's no longer just along the coast of the East Coast, it's moved westward across Pennsylvania and New York. So as it moves, we have to re-educate physicians and patients.”

Aucott sees patients who have lived with symptoms like arthritis for years without knowing they have Lyme — which, in its early stages, can usually be treated with antibiotics.

“We always want to educate people to look for any round or oval skin lesion that's bigger than two or three inches,” Aucott says. “And then also telling people that not everyone has a rash. So that summer flulike illness with a fever and achiness and chills in June, July in a Lyme-endemic area could likely be Lyme disease.”

The CDC suggests using repellents like deet to keep ticks off your body when you’re outside. It’s also good practice to check yourself for any strays once you come indoors — and if you do find a tick, there’s something else you may not know. According to Keesing, feeding ticks usually don’t transmit the Lyme bacterium right away.

“It takes a few days for the tick to feed on you before the Lyme bacterium mobilize from the tick and actually make their way into your body,” she says. “So for Lyme disease, as long as you get the tick off within a couple of days, you're usually OK.”

This article is based on an interview that aired on PRI's Science Friday. You can find more information about Lyme disease and the ticks that transmit it on the CDC website.